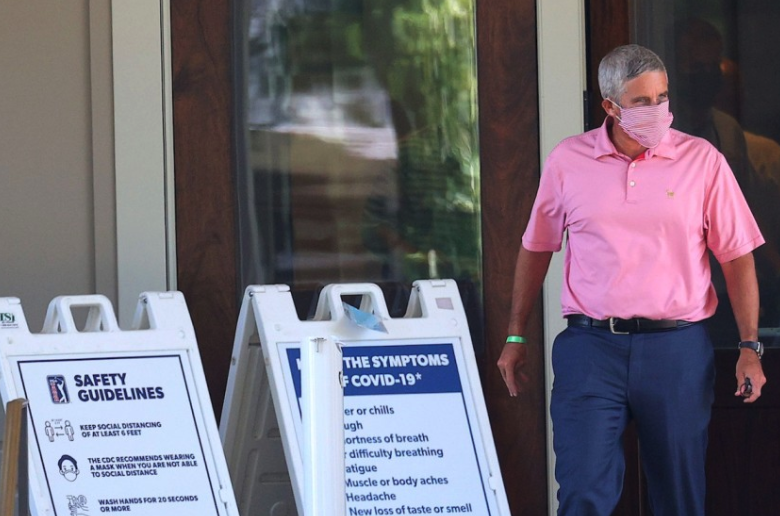 The "Sheriff Of Nottingham" shows off his fancy pink mask.

The Sheriff Of Nottingham has spoken.

And so it is with the PGA Tour.  The Show Goes On this week up there in Cromwell, Connecticut where the TPC River Highlands lies just west of the Connecticut River, due south from Hartford, the insurance capitol.

The Show Goes On at The Travelers — It’s Better Under The Umbrella.

Before the first tee shot was struck early Thursday morning, The Travelers and the PGA Tour were in the national limelight, for dubious reasons.

Sure, they were talking about Nick Watney testing positive for COVID-19 last week in Harbour Town.  No big deal, it’s only Nick Watney, a guy struggling to find the form he once had.

But this week a sequence of events made things A LOT more serious out there on tour.

First guy out was Graeme McDowell.  When his caddie, Ken Comboy, came up positive, G-Mac headed home.  The two had shared accommodations at Hilton Head.

Second guy out was Cameron Champ.  Tested positive on Tueday despite the fact he said he “feels fine.”

Third guy out was world No. 5, Webb Simpson.  A family member tested positive so he headed home to Charlotte.  Webb said:  “In the last 24 hours, I had a family member test positive for COVID-19.  While my tests this week were negative, I feel like it is my responsibility to take care of my family and protect my peers in the field by withdrawing from the Travelers Championship. I am going to return home to Charlotte and quarantine under CDC guidelines, and I look forward to returning to competition after that time period.”

Fourth guy out was world No. 4, Brooks Koepka.  Koepka opted out when his caddie, Ricky Elliott tested positive on Wednesday.  Brooks explained:  “I haven’t tested positive for COVID-19, but as I’ve said all along, I’m taking this very seriously.  I don’t want to do anything that might jeopardize the health of any player in the field or his ability to compete. I was planning to take the next two weeks off anyway, so the right thing to do right now is get home, support Ricky and feel confident that I’m doing what I can do protecting my fellow TOUR members, my PGA TOUR friends and everyone associated with the Travelers Championship this week.”

Fifth guy out was Koepka’s brother Chase.  He withdrew because he played in a practice round with his brother.  Following his brother’s lead, Chase said:  “Despite being very excited about playing the Travelers Championship, I am electing to withdraw.  My team and I have all tested negative for COVID-19, however, I was in close contact with someone who tested positive. I feel as if this is the best decision to keep all other players, caddies and volunteers safe. I wish everyone the best of luck this week.”

So in light of all of this, the PGA Tour says it will tighten the protocols and issued this edict:

“We have been working since March to develop a comprehensive health and safety plan that would be considered a best practice among professional sports leagues. While we have been thorough in building and implementing a program that mitigates as much risk as possible, we knew it would be impossible to eliminate all risk – as evidenced by the three positive tests this week.  We need to use these developments as a stark reminder for everyone involved as we continue to learn from an operational standpoint; we are making several adjustments to our health and safety plan, as noted in the memo sent to players this morning, and we will continuously reinforce to all players, caddies, staff members and support personnel on property at PGA TOUR events to adhere to social distancing and other safety protocols that further minimize risk.”

The Tour is also bringing its fitness trailer on site to keep players from using local gyms.

“The Bubble” needs more inflation, given what has transpired the past two weeks.

The Sheriff Of Notthingham (aka tour commish Jay Monahan) was pressed hard by some scribes on Wednesday, the Chicken-Littles of the internet who think the Tour should shut down today.

The Sheriff fired back with this:

“We feel like we’re on a path that’s going to allow us to continue to sustain our return to golf, but rest assured, there won’t be many sleepless nights; there usually are.  When you’re working in a world of uncertainty, these are the things you worry about. But also rest assured that the PGA TOUR will always do the right thing as it relates to our players, our fans, our constituents and make sure we create the safety environment possible.”

For the record, The Commish got some big-name endorsements:

“I feel like the Tour has done an amazing job of playing golf in a safe environment, given how many people are out here playing, competing and staying safe,” Mickelson said. “When you have 400 people out here, between players, caddies, instructors, whoever else, to only have two or four people (test positive), and then I hear a couple of them are false positives or they tested negative since, or what have you, I think that’s remarkable, the math on that.”

And a big vote of confidence from the world’s No. 1, Rory McIlroy:

“I think as a whole, it’s been going really well,” McIlroy said. “There’s a couple of loose ends that we needed to tidy up, and I think we’ve done that. So yeah, I feel like the mood and the tone of the event was probably lifted by Jay (Monahan) yesterday.”

And so for now and the immediate future, it totally looks like:

The Show Must Go On.