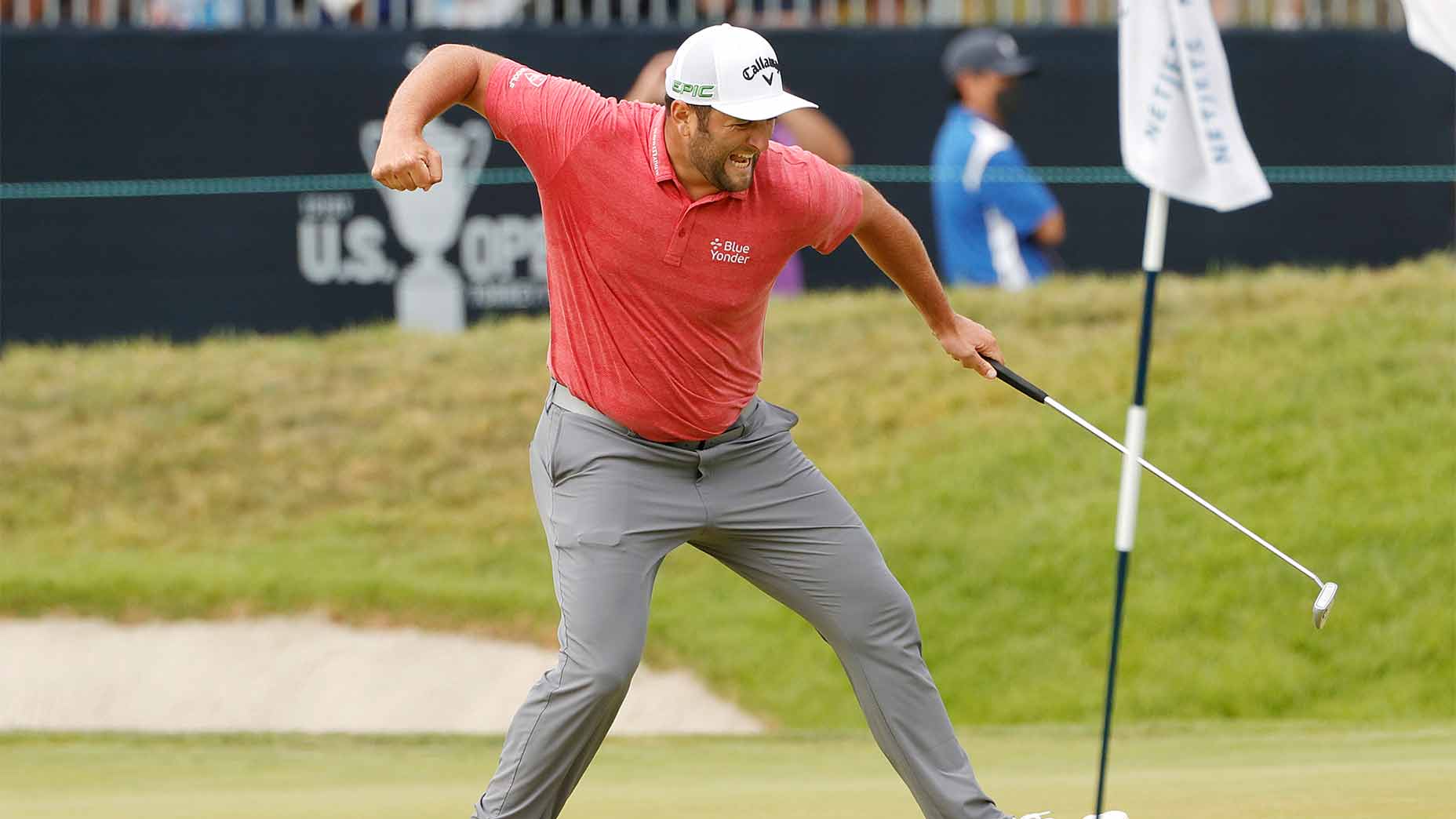 Jon Rahm fist-pumps his birdie putt after it found the cup on the 72nd hole.

The Universe righted itself, karma sang its beautiful song and fate wrapped her loving arms around Spain’s favorite golfing son as Jon Rahm birdied his way to the U.S. Open championship on a drama-packed Sunday afternoon at Torrey Pines.

Rahm, who had The Memorial taken away from him by a positive COVID test two weeks ago, mastered the back nine of the punishing South Course to win his first major in this 121st edition of United States’ oldest major.  Rahm holed incredible putts on the 71st and 72nd holes to close with a magnificent 67 and a six-under par total that nipped game Louis Oosthuizen by a shot.

Rahm, the first player from Spain to win the U.S. Open, found himself a shot back of Oosthuizen with just two holes left to play.  Rahm was a few groups in front of Oosthuizen, who played in the final pairing with Mackenzie Hughes.  Rahm, who hadn’t made any birdie putts of significant length all day, stared down a 24-footer on 17.  It had a huge left-to-right break, as much as eight feet and Rahm read it perfect as his putt found the hole to get him into a tie with Oosthuizen.

Rahm hit a pure drive at the 18th and from 222-yards out, hit a four-iron that leaked too far right and found the greenside bunker.  Rahm faced a tough bunker shot.  He played it well above the hole and it didn’t release as far as he hoped, leaving him another tough birdie putt.  This one was another downhiller, left-to-right from 18 feet away.  Once again Rahm read it and hit it perfectly and his ball went in the side of the hole for a birdie-birdie finish and a four-under par 67, the day’s low round.

Oothuizen still had 17 and 18 to play and it was 17 tee where Oosthuizen made the mistake that cost him a shot at the title.  He pulled his drive, it bounced left and into the deep barranca.  He took the penalty and hit his approach within 11 feet of the hole but his par putt narrowly missed, dropping him to four-under and getting Rahm’s attention as he passed his time on the range with his wife, young child and Phil Mickelson there with him.

At 18, Oosthuizen again pulled his tee shot.  It finished in the rough, forcing him to lay-up.  He needed to hole his third for eagle to tie Rahm and force a playoff but it wasn’t in the cards for the South African star.  He did make birdie for an even par round that left him where he started the day — five under and a shot short of the champion from Spain.

“I can’t believe I made those two putts,” Rahm said, looking back on his spectacular finish.  “I’m a big believer in karma.  After what happened two weeks ago (The Memorial), I knew my best golf had yet to come.  I knew I was coming here to a special place.  Reminds me a lot of back home (Spain).  These poa greens are something I know from back home.”

Rahm was also the perfect example of a competitor who hung tough while mistakes were flying around him.  “Winning?  It’s hard to explain,” Rahm continued.  “You hear people say you have to hang on while other people make mistakes.  This win?  This is the power of positive thinking.”

Once again, the U.S. Open script was one outstanding player stepping up while others were falling apart.  Many of the world’s best had a shot at this one — Dustin Johnson, Brooks Koepka, Justin Thomas, defending champion Bryson DeChambeau, Collin Morikawa and Rory McIlroy.  There were also the underdogs — Mackenzie Hughes and Russell Henley.  The magic ended for both of them.  Hughes, who started the final 18 tied for the lead with Oosthuizen, shot 77 and tied for 14th while Henley was never a factor.  His 76 left him tied for 13th.

But they had big name company.

McIlroy flamed out with a bogey at 11 and a double at the 12th that dropped him back to one-under.  That’s where he finished, tied for seventh.

Morikawa imploded with a double at the 11th then a bogey at 12.  He finished two-under and tied for fourth.

DeChambeau had the biggest crash of all.  He was in the hunt, five-under at the turn and tied with Oosthuizen for the lead after shooting 33 on the front.  After a par at the 10th, he made back-to-back bogeys at 11 and 12 then crushed his hopes with a sloppy double-bogey at the par five 13th.  If that wasn’t bad enough, he suffered a quad (8) at the par four 17th and took 44 shots coming home.  That 77 dropped him all the way to three-over, tied for 26th.

Koepka didn’t have any big numbers but never got going well enough to threaten.  A bogey at the 18th cost him but he still shot 69, posted two-under and tied for fourth.

But this was Rahm’s day, Rahm’s week, Rahm’s “special place” as he called it where the cliffs look a lot like the coastline of his hometown in Spain.  This is the place where he won his first PGA Tour event and the place where he proposed to his wife.

As he hoisted the trophy on the 18th green, his mother and father looked on as did his wife Kelly and infant son Kepa.

“There are three generations of Rahm’s on this green,” he said proudly.

And a lot of good karma.