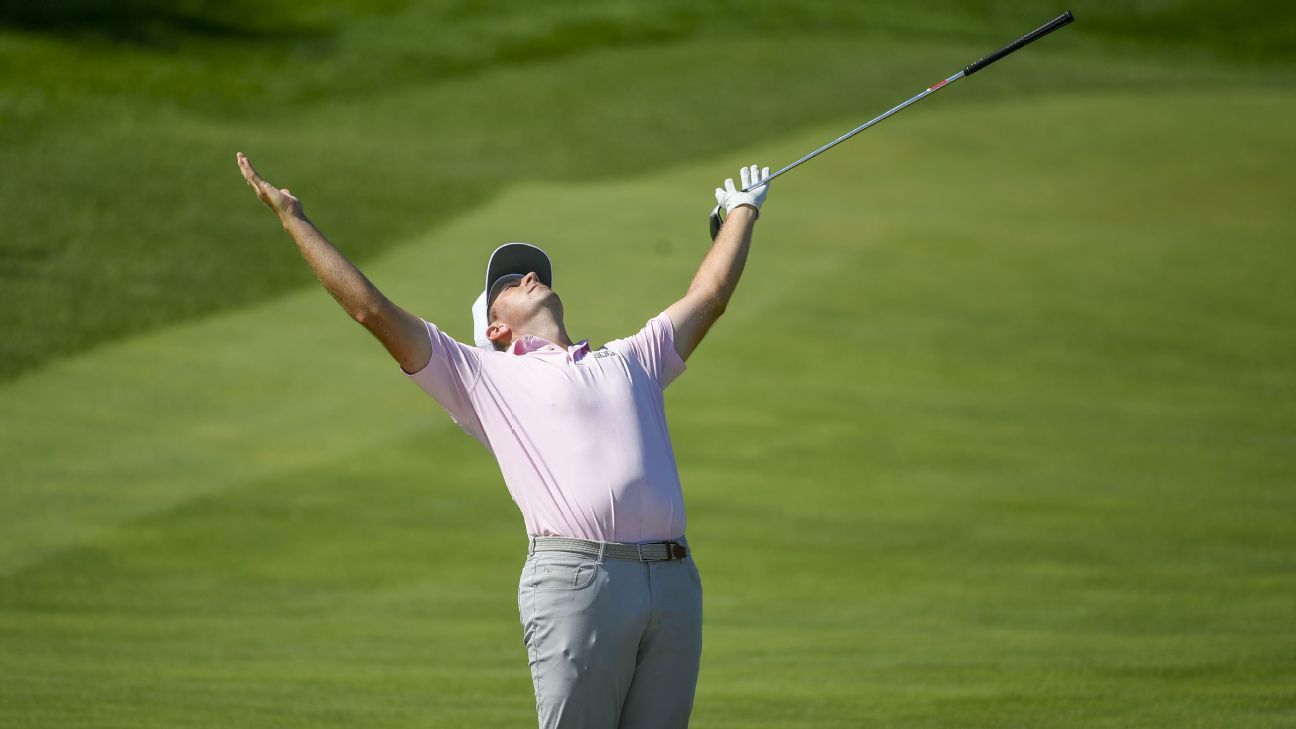 Michael Thompson was locked in a Sunday battle at the 3M with so many contenders, it was tough to keep track of them.

Thompson came through down the stretch with one magical bunker shot at the 16th hole that gave him a lead he would not surrender.

In the end, it was Thompson coming through with birdies on two of his final three holes to land his second PGA Tour win — and it was a long time in the making.  It took seven years and 166 events for the former Alabama golfer to make it back into the winner’s circle but he did it in style at the TPC Twin Cities.

His title run started the short par four 16th where contenders tried to drive the green on the 302 yard par four with deep rough and bunkers to the left and water to the right.  Thompson’s tee shot finished in the left greenside bunker, a whopping 110-feet to the far right pin location.  Thompson stood at 17-under, tied with Adam Long who was finished for the day after shooting 64.

Thompson hit the shot of the tournament — his bunker shot carried most of the green in the air, landed about 20 feet short of the hole, took a bounce then checked up and settled just outside of two feet from the cup.  That got him to 18-under and the solo lead.

With two tough holes to play, he hit a perfect tee shot into the water-guarded 17th and easily two-putted from inside 15 feet.  A perfect drive at the 18th, a precision layup then a gap wedge to 14 feet closed the deal.  He only needed two putts but he ran in another birdie for good measure — he shot 67 and finished 19-under, two better than Long.

Thompson was nearly at a loss for words as this win changed the face of his season.  “It’s been a long time,” said Thompson, whose only previous win came at the 2013 Honda.  “I’m sad my wife and kids couldn’t be here with me to celebrate,” he continued.  Thompson and his wife have just added a second adopted child to their family.  “I played such good golf today.  I don’t know what to say. This is so exciting.”

It’s exciting because of how he came through when the heat was on.  On Saturday after sharing the 54-hole lead, he talked about having to step up and “having some guts” for the final round.  After he had time to let it sink in, he credited wife Rachel, saying: “She never stopped believing in me.”

It was apparent over the final round that Thompson also had a lot of belief in himself.  He was one-over for the round after a bogey at the third hole but bounced back with two straight at the fifth and sixth.  After that he was the steadiest of the players in the final two groups.  It was mostly fairways and greens and three back nine birdies including those difference-makers at the 16th and 18th holes.

His career will take a huge jump.  He moved from struggling at a lowly 151st in FedEx Cup points to 39th.  His world ranking, 218 coming in, will have a big leap.  He’ll ditch his spot this week in the Barracuda Championship for a spot in the prestigious WGC-St. Jude and he’s in the PGA, the U.S. Open and The Masters.

It all came from a day of dogged determination with a log-jam of would-be contenders swarming around him.

But in the end, it was Mike who had the magic.