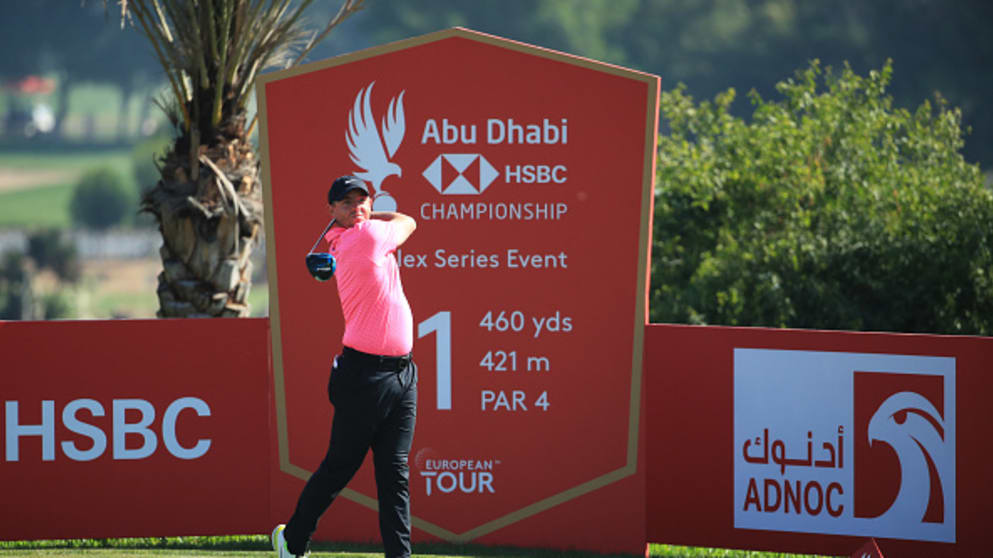 Rory McIlroy made it look easy with eight birdies on day one.

Rory McIlroy’s time off since The Masters wasn’t for relaxation — he spent most of the past nine weeks refining his game and his work paid off Thursday with his best-ever round at the Abu Dhabi HSBC Championship.

All facets of Rory’s game were clicking, especially the putter, and the result was a dazzling eight-under par 64 that might have been lower.  Rory gave himself birdie looks on just about every hole on the lush Abu Dhabi Golf Club and the result was eight birdies, four on each nine.  He took care of business on the par fives, nailing birdies on all four. He made some good birdie putts as well — 12 feet at 10 and 12, 30 feet at the 15th.  He started on the back nine ten made another from nine feet at the first, one from 20-feet at the sixth then concluded with another from 25-feet at the eighth.  Basically, he made shooting that 64 look easy.

McIlroy and the rest of the field had to wait nearly three hours to get started as thick early morning fog delayed the start.

Rory beat his previous best on the course (65) by a shot.

“A lot of it was very good. I felt like I drove the ball well for the most part. Distance control was really good,” McIlroy said after his fast start that gave him a one-shot lead over Tyrrell Hatton.  “I think I started off really well and hit a lot of nice iron shots.  But honestly it was probably the best I’ve putted these greens in Abu Dhabi probably in my whole career.  I’ve shot some really good scores here but I holed some really good ones today.  And I’ve always struggled to read them here, but I sort of got my eye in early and kept it going.”

Rory also credited the work he did in his time off following The Masters, where he finished with three nice rounds after stumbling with 75 at the start.  “I played and practiced quite a bit over the Christmas break.  He also revealed that he got a look from Butch Harmon.  “Butch, the one thing I love about Butch is he’s worked with so many players.  Michael’s (Brannon) here this week and he knows my swing better than anyone.  I’m looking forward to seeing him more often,” McIlroy said of his long-time swing coach.

Hatton’s 65 came thanks to eagles at the 10th and 18th holes and three birdies on his bogey-free card.  Hatton had a breakout season in 2020 and has climbed into the top 10 in the Official World Golf Rankings, checking in this week at No. 9.

With the three-hour delay, half the field didn’t finish and will start early Friday morning.

The second round was a total bummer for McIlroy.  After a great start that saw him birdie two of his first three holes and get to 10-under, he reverted to “Bad Rory.”  At the par three fourth he found the front bunker and failed to get up-and-down and posted his first bogey of the tournament.  Things got worse at the long par four fifth when he quick-snap-hooked his tee shot into trouble, had to pitch out sideways into the thick rough.  His third came up short.  His fourth finished 15 feet from the cup and he two-putted for double-bogey.  A bounce-back birdie at the eighth got him back to even at the turn.  But two more back nine bogeys and a birdie at the 14th dropped him back to seven-under par.

While Rory was floundering, Hatton was flourishing.  The Englishman made the turn in four-under, thanks to an eagle at the par five second and three birdies against one bogey.  He was 11-under at that point then got to 12-under with another birdie at the par five 10th.

With the finish to round round early, the field didn’t finish their second round.  Rory was on the par three 15th when the horn sounded, Hatton on 14.

But Hatton, five-under for the round, built a five-shot lead over Jason Scrivener and Jazz Janewattanond.  Both finished in the morning wave and were in at seven-under for 36-holes.

In other developments, Andrew Johnston was forced to withdraw from the tournament after he came into contact with someone who tested positive for COVID-19.  He’s in self-isolation pending negative tests.

Danielle Kang (64) Sets The Pace At LPGA Tournament Of Champions:

Danielle Kang’s finish to the 2020 season wasn’t that great but she got the 2021 LPGA season off to a flying start Thursday at the Diamond Resorts Tournament of Champions.

Kang, who works with Butch Harmon, turned in a seven-under par 64 at Tranquilo Golf Club at Lake Buena Vista outside Orlando on a picture-perfect day for golf.  Kang had a clean, bogey-free scorecard with seven birdies to sit at the top of the leaderboard.  But there were plenty of big names right behind her.

Defending champion Gabby Lopez turned in a 65 along with both the Korda sisters — Nelly and Jessica.  Jessica had the best nine-hole performance on day one with five birdies and an eagle on the back nine, shooting seven-under par 30 after going one-over on the front.

Brittany Lincicome and Stacy Lewis were two shots behind the leader with five-under par 66s.  Lexi Thompson, Brooke Henderson and Angela Stanford were all in with four-under par 67s.

Annika Sorenstam, the retired superstar, is playing in the celebrity portion of the event.  She shot 73 and was in seventh place in the modified stableford scoring for the celebs.  Mardy Fish was the leader, shooting 66 and scoring 41 points.

Billy Walters Get A Parson, Mickelson Denies Letter Of Support:

You may recall Phil Mickelson’s buddy Billy Walters got Lefty in a bit of a jam with the inside-trading scandal involving stock in Dean’s Foods.  Walters ended up in jail and Lefty simply repaid his ill-gotten gains from the insider-trading incident.

Walters is now out of prison, thanks to a Presidential Pardon issued on Donald Trump’s final day in office.   It was first reported that Mickelson wrote a letter of support for Walters but Lefty’s lawyer denied everything.  Attorney Glenn Cohen told ESPN that “Phil had nothing to do with this” and said that no letter or phone call was made by Mickelson on Walters’ behalf.

A press release from the White House listed Mickelson as one of several big names sponsoring the action for Walters — others included Butch Harmon, David Feherty and Peter Jacobsen.

“The press release referencing Phil Mickelson is erroneous,” Cohen said.  “The reason we are upset is because it’s untrue.”