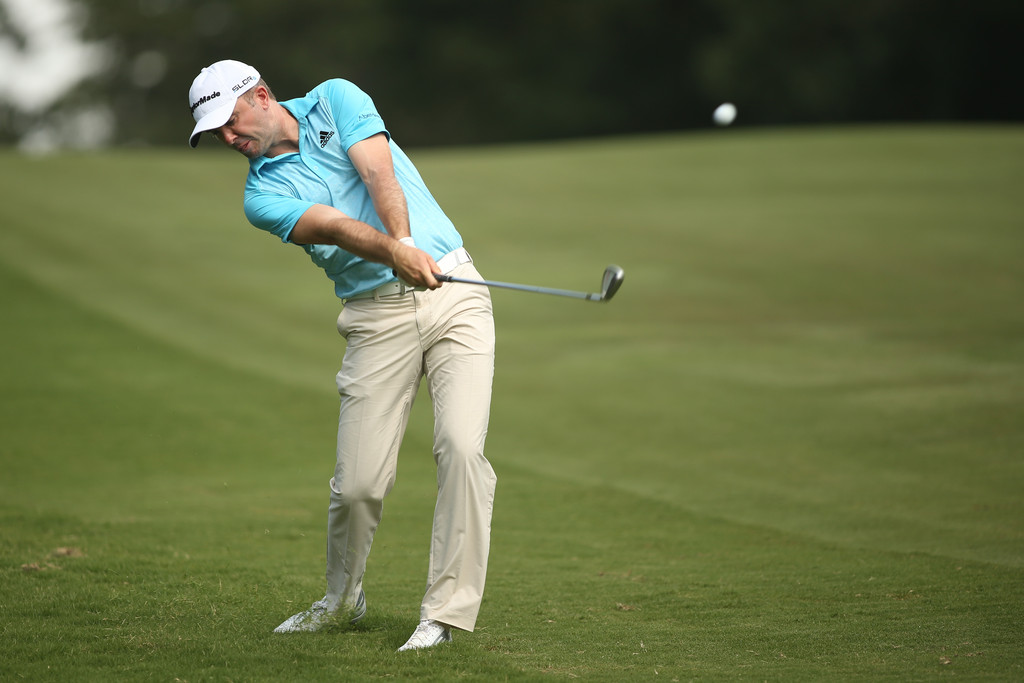 Las Vegas is the land of long-shots and that’s what Martin Laird was coming into the Shriners Hospitals for Children Open.

Laird, playing on a sponsor’s exemption, pulled off two miraculous shots on Sunday afternoon at TPC Summerlin then survived a bogey at the final hole that sent him into a three-man playoff.

Laird finished with 68 and a 23-under par total that was matched by Austin Cook (66) and young Matt Wolff (66).  Laird’s first miracle of the afternoon came at the par five ninth where his three-wood second plugged under the lip of a bunker.  He faced a near-impossible shot with bogey in the equation.  Instead, he took a mighty swing, the ball popped straight up, narrowly missing him, landed softly on the downslope of the green and rolled into the hole for an eagle three that gave him a two-shot lead heading to the back nine.

It looked like Laird might lose it all at the par three 17th.  After a three-putt par at 16, his tee shot on the 195-yard par three sailed 35 yards right over trees and into the rough.  Bogey looked like a good score from there.  He punched his second low, over a cart path, between the trees, through the rough right of the green and it stopped 17 feet from the hole.  The second part of that miracle shot came when he made the putt for par.

He led Wolff and Cook by a shot but his approach to 18 sailed right.  A sub-standard chip left him 25 feet for par and he took bogey to set up the playoff.

All three made regulation pars at the 18th, the first playoff hole.  Then they went to 17, the scene of Laird’s second miracle shot.  All three hit the green with Laird the closest at 22 feet.  Wolff missed from 38 feet for birdie then Austin failed on his attempt from 25 feet.  Laird then hit his putt, watched it make a big swing from right-to-left then cruise into the hole for the title-winning birdie.

It was Laird’s first win in nearly seven years and a repeat of his playoff win at this event in 2009.

“It’s been a while,” Laird sighed after his stunning victory.  “I’ve been working hard, been playing well for the last few weeks but didn’t have much to show for it,” said Laird, who had knee surgery to repair a torn meniscus in his left knee five months ago.

Laird played alongside Pat Cantlay, who was the overwhelming favorite to take the title over the last 18.  But Cantlay had a horrendous front nine with four bogeys that took him out of contention.  He eventually finished with 73 to shoot 18-under.

Bryson DeChambeau shot himself out of it on Saturday but rebounded with a 66 to close out the week and finished at 18-under.

With rain falling for most of the final round, Ernie Els holed a 40-footer for birdie at the 18th hole and won the SAS Championship by a shot.

Els made that birdie at 18 and one at the 17th to shoot 66 for a winning 12-under par total.  That final birdie clipped Colin Montgomerie, whose 70 left him in solo second at 11-under.

Montgomerie failed to birdie the 17th and with the wet conditions found himself 190 yards out for his approach into 18.  He left his second outside 50 feet.

Vijay Singh’s 70 earned him solo third at 10-under at Prestonwood Country Club in Cary, N.C.

Els’ first win of the year came in Newport Beach.