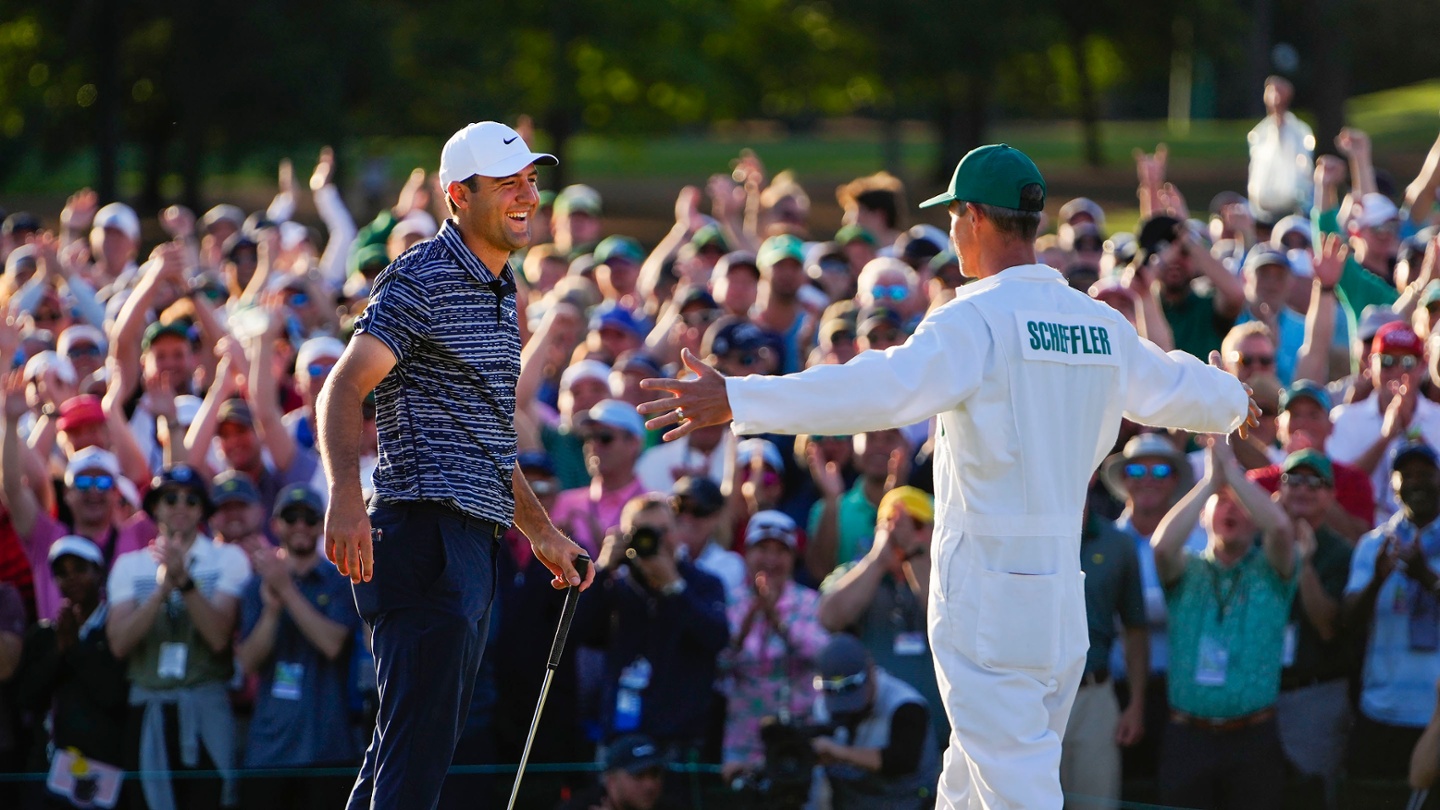 Scottie Scheffler got off to a very human start and an even more human finish at the 86th Masters on Sunday.

But in between, the world’s No. 1 player was simply sensational, ice-water cool and clutch when he needed to be on his way to winning that coveted Green Jacket at the Augusta National Golf Club.

Scheffler went to the first tee on a picture-perfect afternoon with a three-shot lead over gritty little Cameron Smith but after a bogey-bogey start and a wild drive at the short third hole — things were looking very, very shaky for the big Texan.  A pair of birdies on the first two holes by Smith cut the lead to a single shot but in an amazing sequence of events, Scheffler totally flipped the script at the third green and began his march to the championship.

After getting relief from the scoreboard left of the green where his big-hook tee shot ended up, Scheffler’s second came up short and bogey came into the equation.  With the door open to square things up, Smith’s  second also came up short.  It was then that Scheffler produced his most significant shot of the round.  He pitched in for birdie, then watched Smith hit a poor pitch and two-putt for bogey.  The lead was back to three then it grew to four when Scheffler scrambled for par while Smith missed from seven feet at the par three fourth and made a second straight bogey.

The lead was back to four and Scheffler began to play like the world’s No. 1.

“Number three, I was surprised,” Scheffler said of his pitch that found the hole.  “It changed the complexion of the day.  I just tried to keep my head down and execute shots.  I took care of my stuff and played good, solid golf.”

It was very good and very solid.  A birdie at the seventh got him to 11-under and he took that four shot lead to the final nine — where anything can and has happened over the years.  All sorts of craziness and there was exactly that.

Both Scheffler and Smith bogeyed the 10th.   Both made pars at 11.

Then came the 12th — and Rae’s Creek — where many a hopeful has drowned their Green Jacket hopes.  Smith joined the body count.

Scheffler played too safe — way left, off the green with the pin in that tempting but treacherous Sunday far right position.  Smith went after it with a nine-iron.  He swiped it and it had no chance — it dunked in the water without even hitting the shaved bank.  He’d end up with a triple-bogey six and his Masters hopes were somewhere in the bottom of Rae’s Creek.

“A poor shot on 12 and there’s the tournament,” Smith lamented later after Scheffler’s victory.  “A perfect nine-iron (160 yards) just a really bad swing.  I’ve played some of my best golf around here — just not quite my time yet.”

It was Scheffler’s time as he bore down with par at 13 then back-to-back birdies at 14 and 15 that took him to 12-under par and seven clear of Rory McIlroy — who had gone around Augusta National in 64 shots — his best-ever performance and posted seven-under.

Scheffler kept his ball dry and made par at 16 then scrambled for a wonderful four at 17,  His drive at 18 was a bit right but he hit yet another nice iron shot safely on the green, 40 feet above the hole.

Then came his very human moment to finish the victory.

For the record, his rounds were 68-67-71-71.  Ten-under par and three clear of McIlroy despite the closing four-putt.

Scheffler was smiling and humble as 2021 champion Hideki Matsuyama slipped the Green Jacket on Scheffler.  The Japanese star had a bit of a struggle getting it on the taller Scheffler.

“I’m pretty tired — I wanna go home and celebrate.  I want to thank my family,” the new champion said.

And all the family was there.  He went through about 14 hugs as he came off the 72nd green and made his way to the scoring room.

You can bet more hugs are coming when he gets home.