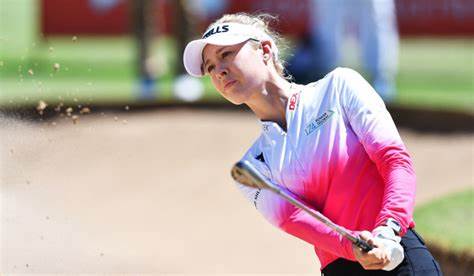 There are no timelines yet for Nelly Korda's return to the LPGA Tour.

The LPGA Tour is back in business with the Lotte Championship at the Hoakalei Country Club on Oahu but it will be a while before we see American’s best player — Nelly Korda.

Korda is at home recovering from surgery to repair/alleviate a blood clot in her subclavian vein.  “I am pleased to report the procedure went well and the doctors were happy with the outcome,” Korda reported.  I am home recovering and preparing to start rehab.  I am looking forward to getting back to 100 percent so I can begin practicing.”

Nelly gave no timeline for her return to competition.

She’s had a rough year thus far.  She contracted COVID the second week in January and that caused her to miss the beginning of the season.  Then came the blood clot.

Meanwhile, Lydia Ko is the defending champion at Hoakalei and she’s risen to No. 3 in the Rolex World Rankings.

Ko broke her three-year winless drought with her victory in 2021.  She set both the 54 and 72-hole tournament scoring records with her seven-stroke victory at 28-under par.

Notables in the field include Brooke Henderson, winner of the Lotte in 2018 and 2019.  Jennifer Kupcho, winner of the season’s first major at The Chevron, has made the trip to the islands.

This is the Lotte’s 10th anniversary and the first year at the Hoakalei Country Club, an Ernie Els design.