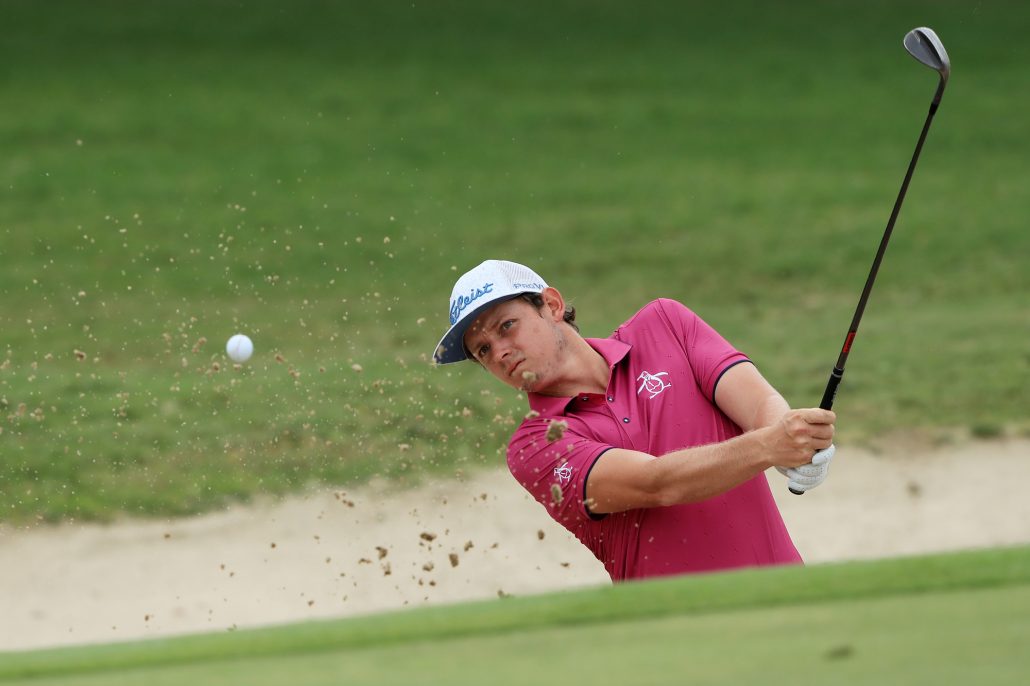 No player in the storied history of The Masters had ever shot four rounds in the 60s at Augusta National Golf Club.

Australian Cameron Smith changed that on Sunday afternoon at the 84th Masters.  Smith scrambled and putted his way to a a final round 69 that went with previous rounds of 67-68-69 and became the first player ever to shoot four rounds in the 60s in the long history of The Masters.

“That’s pretty cool, I didn’t know that,” said Smith after he signed his card for a 15-under par effort for 72 holes and tied for second with first-timer Sungjae Im behind record-setting winner Dustin Johnson.

“A lot of good scrambling,” said Smith, who came in to this week ranked 45th in the world.  His best-ever finish in a major will move him up this week.  “A lot of mistakes into the greens,” Smith admitted but his play around the greens and his putting was nothing short of stellar all week.

“I thought I might have a chance if I got to Dustin’s original score of 16-under but he was just too good.”

It was Smith who applied the most pressure to the eventual winner.  He made two quick birdies at the second and third but took his first bogey of the day at the fifth.  He added two more at eight and nine and made the turn in 33, cutting Johnson’s four-shot lead at the start to just two heading to the crucial, pressure-packed back nine.  He hurt himself with a bogey at the 11th, failing to get up-and-down from right of the green but it was one of the few times he failed to scramble for par.  Smith didn’t make another birdie until the 15th where he hooked his second so badly, it finished up left of the Sarazen bridge.  He hit a splendid third and made his final par of the day.  He made great pars at 17 and 18 to finish with 69 to step into The Masters record books.

Andy Ogletree joined Dustin Johnson in the Butler Cabin ceremony as the tournament’s low amateur.  It was a contest between him and John Augenstein, the player Ogletree beat in 2019 in the finals of the U.S. Amateur.  Andy had a consistent week.  He shot 74-70 playing the first two rounds with Tiger Woods then shot 71-72 on the weekend to finish at even par 288.  Augenstein was ahead of him after 36, shooting 69-72 but finished with a pair of 75s to go three-over for the tournament.

Sungjae Im put on an incredible short-game exhibition over the final round.  He tied Cameron Smith with a closing 69 and a 15-under par total.

It was Im’s first Masters appearance and he had a very modest goal at the start of the week:

“I just wanted to make the 36-hole cut,” Im said after his day was finished.

He did a bit better than that.

Rory McIlroy took a new approach to this year’s Masters.  With all the attention on Bryson DeChambeau coming into the tournament, Rory said he was “much more relaxed.”

After stubbing his toes with an opening 75, McIlroy settled in and played well the rest of the way, shooting 66-67-69.  The old saying that you can’t win The Masters on Thursday but you can certainly lose it, held true for Rory.  McIlroy finished tied for fifth with Dylan Frittelli, another first-timer at The Masters.

Bryson DeChambeau hopefully took notice of his playing partner Sunday — 63-year-old Bernhard Langer.  By day’s end, Langer got the best of Bryson — shooting 69 to DeChambeau’s closing 73 and Langer beat him for the tournament, finishing tied for 29th at three-under par while DeChambeau’s rounds of 70-76-69-73 left him at two-under and tied for 34th.

In the matter of Phil Mickelson vs. Tiger Woods, Woods prevailed.  Tiger shot rounds of 68-71-72-76 and finished one-under and tied for 38th while Mickelson’s rounds of 69-70-79-73 put him three-over and tied for 55th.  His Saturday 79 was his worst competitive round at The Masters.