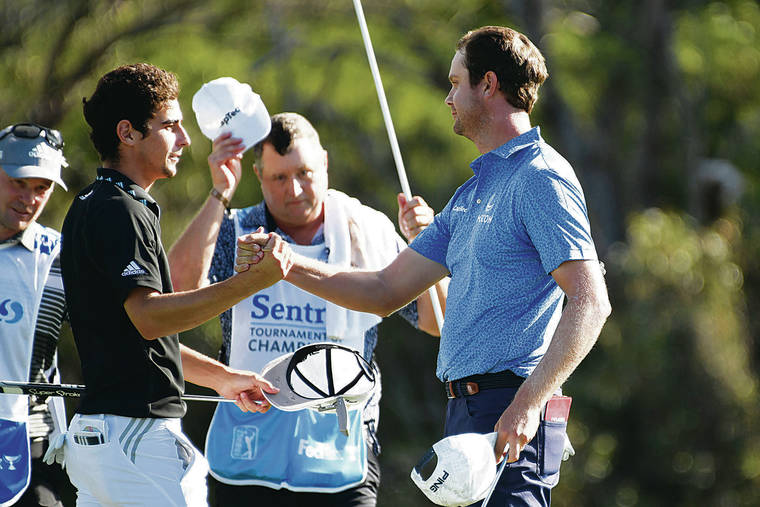 TOC winner Harris English and runnerup Joaquin Niemann are both at Waialae.

Adventures In Paradise, Episode Two, continues this week and after Harris English went overtime to win for the first time in seven years last week, the Sony Open has a tough act to follow.

English birdied the 72nd hole to force a playoff with spunky Joaquin Niemann at the Tournament of Champions and another birdie the second time down 18 got the job done for Harris, validating the resurgence of his game that had gone dormant.

Niemann put on a show with a dazzling effort.  His shot-making artistry and short game skills were on full display and he went nine-under despite some testy wind conditions the final day at Kapalua.

It’s a short commute over to the Oahu and historic Waialae Country Club, a Seth Raynor course that dates back to 1927.  The Royal Hawaiian Hotel and Waialae Golf Course were built by the Territorial Hotel Co. as part of a promotional program to develop luxury travel trade to Hawaii. Matson Navigation Co. built the luxury passenger liner Malolo as part of this program.

Like any Seth Raynor course, there are some unique holes.  The par three 13th replicates one on the Biarritz Course in France.  Waialae’s eighth hole is patterned after the famous Redan hole on the North Berwick West Links in Scotland.

At the 16th hole, the landmark “W” is formed by intersecting angular palm trees and it is a throwback to the sixth hole at The National Golf Club at South Hampton on Long Island.  The 10th has some features from the famous 17th (Road Hole) on the Old Course at St. Andrews.

Good news is that both of last week’s playoff principals — English and Niemann — made the short trip and will be playing this week.  Last week, there were eight players from the world’s top 10.  This week there are just two — Collin Morikawa checks in at No. 5 and Webb Simpson at No. 8.  Morikawa put himself in solid contention last week but could do not better than a closing round of even-par 73 that earned him a tie for seventh while Simpson, still getting over his battle with Coronavirus, worried about his stamina but still finished in the top 20 with a tie for 17th and a final round 70.

Cameron Smith won at Waialae last year.  He managed just one sub-70 round last week and tied for 24th.

This is the first full-field event for 2021 and the first ball goes in the air Thursday evening (east coast) and despite most of the top 10 heading back to the mainland, there are still enough names to make it interesting although the PGA Tour found out that its television ratings flounder when it has to go head-to-head with NFL playoffs.  Ryan Palmer shared the 54-hole lead with Harris last week but on Sunday, the 18-year veteran simply didn’t have his best stuff.  Playing with Harris in the final pairing, he couldn’t keep his momentum from his Saturday 64 and a closing 71 gave him solo fourth.

Tour Ironman Sungjae Im put together four sub-70 rounds on the Plantation Course and tied for fifth.  He’s playing (of course) and this guy’s simply the human equivalent of an ATM machine.  He shows up and out comes the money.

Once again the Tour is in prime-time for its broadcast and once more, it will be up against the NFL on Saturday and Sunday evenings.  Lamar Jackson and Josh Allen lead the Ravens-Bills into action Saturday night while Tom Brady and Drew Brees star in Sunday evening’s Buccaneers-Saints matchup.

When it’s the PGA Tour vs. the NFL, it’s an instant mismatch.

But still, it’s Hawaii — there’s the sand, the surf and the whales.  And no one gets tackled.

Editor’s Note:  Jhonny Vegas was forced to withdraw from the field on Tuesday after getting a positive COVID-19 test result.  He’s been replaced in the field by Seamus Power.