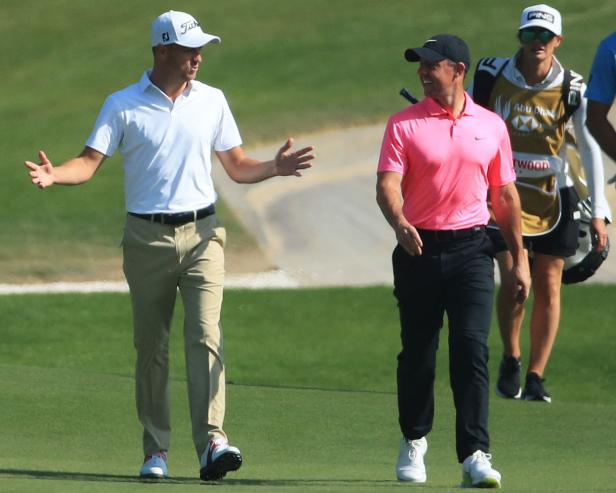 Rory McIlroy is the 54-hole leader, J.T. missed the cut in Abu Dhabi.

Rory McIlroy faltered on the Friday afternoon/Saturday morning second round at the Abu Dhabi HSBC Championship but he bounced back with a 67 on Saturday afternoon at the Abu Dhabi Golf Club and holds the 54-hole heading into Sunday’s finale in this opening event of the European Tour season.

It should be an exciting final round of this huge Rolex Series event because the core of the 2021 European Ryder Cup team are in the hunt.

McIlroy set up his back nine when he holed a short wedge shot from 73 yards out on the par five 10th for eagle.  He had two more birdies and a single bogey and failed to birdie the par five 18th for the second straight day.  Still, he’s a shot in front of ninth-ranked Tyrrell Hatton, who could have held the 54-hole if his putter had not let him down on the final nine holes.  All he could manage was a one-under par 71 on a windy day that put him in the house a shot behind McIlroy’s 13-under total.

Tommy Fleetwood’s putting let him down for the most of last season.  He’s fallen to 19th in the world but he had some life in him on his way to a 67 that got him to 11-under par, solo third.

England’s Mark Warren and American David Lipsky both turned in 68s and were tied at 10-under to make a total of five players who reached double-digits under par.

McIlroy has had an outstanding record in Abu Dhabi but has never won the event and was cautiously optimistic after his round.

“I can’t go into tomorrow thinking it’s my turn,” Rory said when asked about his record in Abu Dhabi. “I want to make it my turn. I have to go out there and continue to hit the ball like I hit it on the back nine tonight. If I can do that and give myself plenty of chances, I’ll have a real chance.  It’s so blustery and it’s a different type of golf than we’re used to playing here in Abu Dhabi where there’s usually not much wind. You feel like you have a chance on every hole. There’s like a little more scrambling involved and longer putts.

Jessica Korda had an incredible day Saturday at the LPGA’s Tournament of Champions but still trails Danielle Kang by two shots going into Sunday’s finale.

Korda shot an 11-under par 60 at Tranquilo Golf Club to get to 19-under par but 36-hole leader Kang had an outstanding day as well, following up her rounds of 64-65 with an eight-under par 63 that got her to a whopping 21-under par.

The other Korda sister, Nelly, was along in third place at 15-under after shooting 67.

Annika Sorenstam, playing in the celebrity draw, was 10th in that field after rounds of 73-76-71.