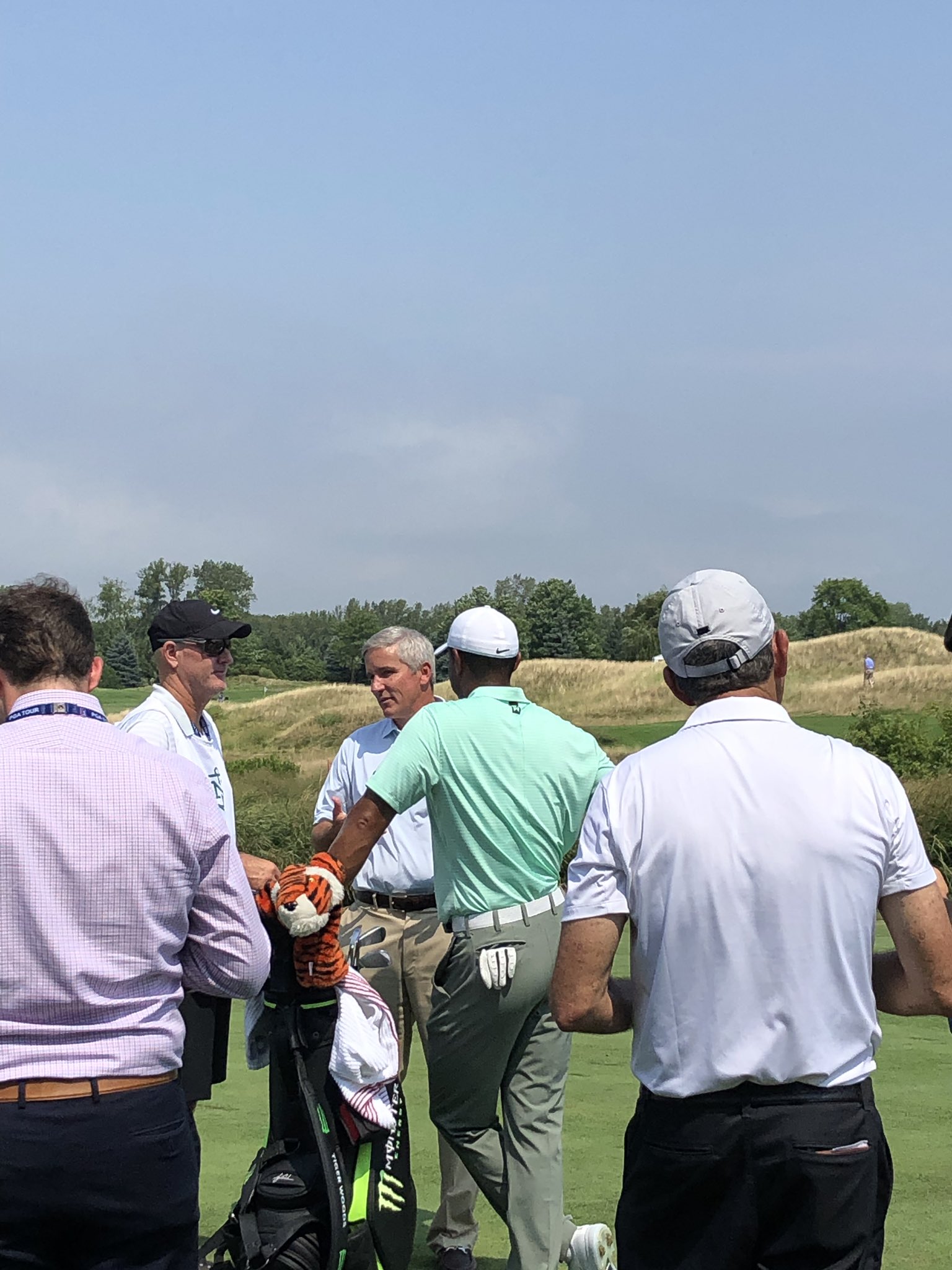 "Jay, look, I played with DeChambeau and he's so slow I thought I'd be eligible for social security by the time we finished."

Medina Madness: Slow Play Upstages Everything, Much To The Tour’s Dismay

This isn’t really what the PGA Tour had in mind.

But it’s what the tour gets for basically burying its head in the sand when the pace of play subject comes up.

Things totally blew up last week at the Northern Trust when Bryson “Molasses In The Winter” DeChambeau became the human dartboard for the rest of the players who have had it up to their eyeballs with slow play.

Yeah, it’s a toss-up as to who is the Mayor Of Slow-Play City — DeChambeau or J.B. “The Human Rain Delay”  Holmes.

Used to be Ben Crane but he’s basically vanished into obscurity.  Even Kevin Na has gotten a bit faster.

DeChambeau has become the Slow Play Poster Guy because of his higher-profile, his higher ranking and the fact that he took nearly two minutes to hit a putt last week.

Seriously?  A herd of turtles would go blowing past this guy.

Some of the blow-back in the Twitter-sphere got serious.

Eddie Pepperell from the European Tour didn’t pull any punches after DeChambeau put the slow-play on Justin Thomas and Tommy Fleetwood last week during their first two rounds at Liberty National:

“Just look at Tommy and Justin, both looking completely bored. Slow players do this to their playing partners making the game less enjoyable. Problem is, the unaffected single minded twit in this instance, doesn’t care much for others.”

In this case, the “twit” was none other than DeChambeau.  Pepperell later apologized but really, he was pretty much spot-on.

Thomas, who saw it up close and personal, was a bit more diplomatic with this comment:

“I like Bryson as a person, but he’s a slow golfer.”

Tiger Woods got a full dose of DeChambeau earlier this season and watched his group fall well behind Rory McIlroy, whose group was out of sight in front of them:

“Well,” Woods said with a bit of a grin, “Rory’s group played quickly and, (hesitation) — we didn’t.”

Just for the heck of it, we timed DeChambeau a few weeks back when he was hitting his opening tee shot on day one of a tournament.  From the time he pegged his golf ball, he took one minute, thirty seconds.  His playing partners took 25 and 35 seconds respectively.

Which brings us back to the enablers — and that would be the PGA Tour headed by The Sheriff Of Nottingham   (aka commish Jay Monahan) and his hearty band of henchmen.

Things have gotten so out of hand that  The Sheriff Of Nottingham ordered a decree:

“We know that the individual habits of players when they are preparing to hit a shot can quickly become a focal point in today’s world, and our players and fans are very passionate about this issue.  f operations.  We are currently in the process of reviewing this aspect of pace of play and asking ourselves, ‘Is there a better way to do it?’ We think technology definitely plays a key role in all of this and we are thinking about new and innovative ways to use it to address these situations.”

That came from Henchman Tyler Dennis (aka tour chief of operations).

Problem is, the tour cringes at the thought of hitting a player with a shot penalty.

The only “shots” the tour henchmen are taking are at the bar after work up in Ponte Vedre whenever this slow play issue comes to the forefront.

As for DeChambeau, he’s in total denial:

“When people start talking to me about slow play and how I’m killing the game, I’m doing this and that to the game, that is complete and utter you-know-what,” DeChambeau claims.

Bryson  Molasses In The Winter  DeChambeau may not be killing the game, but he sure as heck is pissing a lot of fellow players off to no end.