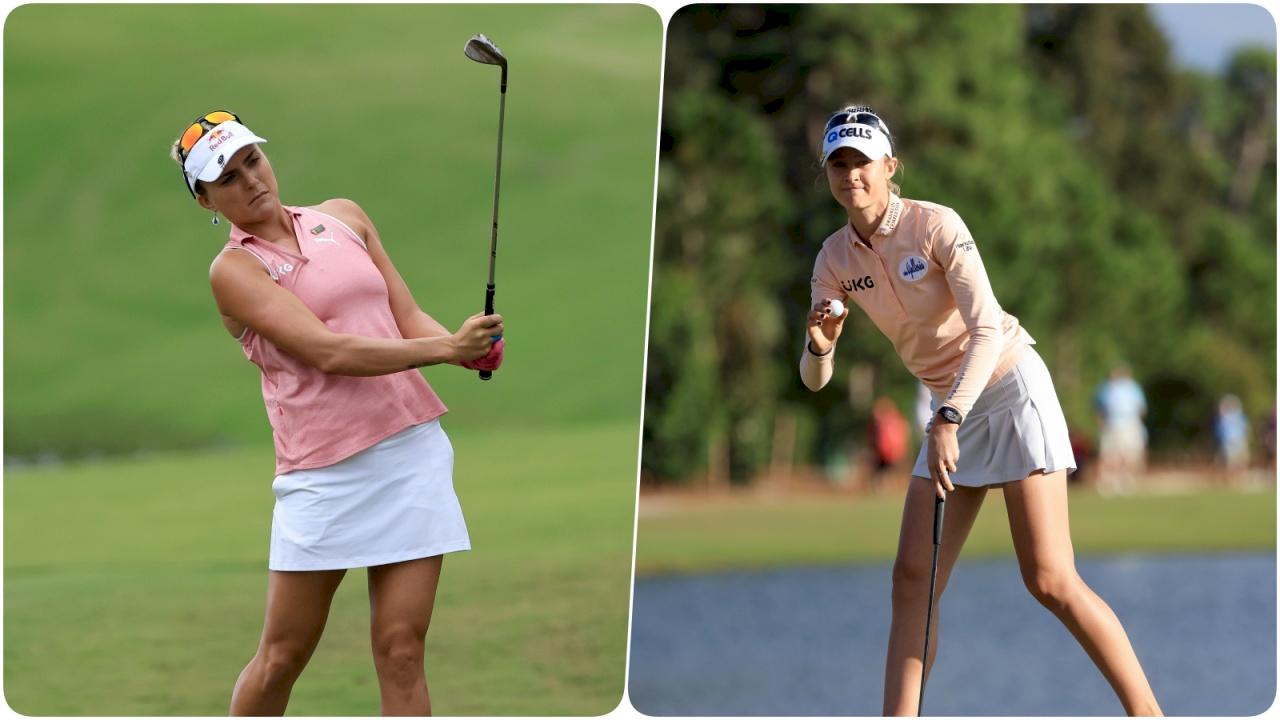 A head-to-head battle between Nelly Korda and Lexi Thompson morphed into a four-woman playoff.

We’ve all seen a lot of craziness in the world of golf but what transpired on a cool, crisp Sunday afternoon on the Florida west coast was one for the books.

Huge crowds had turned out for the Pelican Championship finale at the old Belleview Biltmore Golf Club that was transformed into The Pelican Golf Club thanks to $30 million from the money-laden Doyle family of golf lovers.  The masses showed up for good reason — two of America’s most popular players were going head-to-head.

For three days, world No. 1 Nelly Korda and unlucky No. 13 Lexi Thompson took apart The Pelican.  Both were an eye-opening 16-under for the first three days — Nelly had the momentum of a Saturday 63 while Lexi’s 65 helped her keep pace with Nelly.

Korda dominated the first nine holes, she was 20-under at the turn and only a sloppy three-putt at the second kept her from being 21-under.  The ninth saw Nelly hole a seven-footer for birdie while Lexi shoved a 10-footer to the right.  Pay attention here folks, as Lexi was having a blast most of the week with that new “modified-paintbrush” putting style.  Heck if it’s good enough for Collin Morikawa, it’s good enough for the putting-challenged Thompson.

Things took a quick turn in Lexi’s favor at the 157-yard par three 12th.  Nelly went long left and failed to get up and down for par while Lexi holed a 23-footer for birdie.  That bears repeating:  LEXI HOLED A 23-FOOTER for birdie!!  Maybe there’s something to the grip change.  It was the old two-shot reversal — both walked off the green at 19-under with just a half-dozen holes left.

The first sign that things might fall apart for Lexi was a missed three-footer for birdie at the par five 14th.  It was her chance to move a shot in front of Korda, who had just fanned a seven-footer for her birdie.

They exchanged pars at 15 and 16.  Up ahead, defending champion Sei Young Kim did not go quietly.  She posted 17-under as did former world No. 1 Lydia Ko and both waited at 18 to see what might transpire.

Then came THE SLOP AT SEVENTEEN — as it may come to be remembered.  The 17th at Pelican was playing just 340 yards, par four.  Korda and Thompson both hit perfect drives.  From 117 out, Korda got the old power pull and her ball rolled over the back of the elevated green and found a 10-foot strip of land between two gaping bunkers and her ball rolled down the hill, leaving her a flop shot situation that might have made Phil Mickelson sweat.  From just 96 yards, Lexi had a flip sand wedge and she planted it 25-feet from the hole.

It was predictable that Nelly would have trouble and she did.  He long flop shot flopped into the huge bunker in front of her.  She made a great recovery and put her fourth 10 feet below the cup — good chance to save bogey.  Lexi ran her birdie effort about three feet past the hole — keep in mind the one she missed at 14.  Korda’s bogey effort ran two feet by but she was above the hole.  She watched as Thompson shoved her par attempt and took bogey.  Nelly then did the unthinkable — she lipped out the two footer.

Korda walked off with a triple-bogey seven, going from 19-under to 16-under — two behind Thompson who needed just a routine par at 18 to win for the first time in two years.  Heck, Nelly was now behind Kim and Ko, who were suddenly very interested spectators at 18.

Both players hit perfect drives at the 407-yard finishing hole.  Lexi had just 160 in but pulled her shot left, just off the green but with the manicured fringes — it would be putter all the way from about 40 feet.  Nelly cruised a seven-iron from 156 to about 14 feet for a good look at birdie and she desperately needed one just to keep her hopes for a playoff alive.  Lexi hit a good approach but left herself a smidge outside four feet.  Yes, golf knows what scares you.

Korda then did what Korda does.  She holed her birdie, crowd goes nuts — heat’s on Lexi.  Drain it for the win.

Lexi then did what Lexi does, at least under the gun.  She shoved her par putt — four-way playoff at 17-under — back to 18 tee.

Didn’t take long for Nelly to show why she’s the best in the world.

Predictably, Kim and Ko missed the green with their approaches but with world-class short games, surely they’d save pars.  From 153 out, Nelly once again cruised a seven-iron to nearly the identical spot where she just made birdie, this time her putt was about four-feet longer.  Lexi hit a gem from just 139 out with eight-iron and left herself with just outside six feet for birdie.

Once all four were on the green, Korda remembered what her putt would do.  “It was a little left-to-right,” she’d say afterward.  Remember the old saying:  “First one in wins,” well Korda’s birdie found the bottom — Ko and Kim were out and all eyes were on Lexi.  Remember — golf knows what scares you.

This time, Thompson didn’t shove it, she pulled her birdie putt and it was all over.  Thompson gave Nelly the traditional LPGA Tour hug but didn’t say a word.

As for Korda, she rose from the ashes of a triple-bogey to win for the fourth time this season and has huge momentum heading into next week’s CME Globe finale in Naples.

“I gave myself a lot of opportunities this week,” Korda said after getting doused with some champagne.  “My putting probably wasn’t the best, but pulled it off with it, so that’s what counts.”

Korda then made a revelation of sorts:

“I almost kind of lost faith.  I was like, OK, like, you know, time to focus on next week in a sense.  I just found myself probably the best putt, putted two times in a row, and rolled them in really nicely. Even though I say I think I lost hope, I will never give up. I’ll go down fighting every single time.”

Nelly didn’t go down, Lexi did.

What everyone saw was the unshakeable Nelly Korda.

And the still putting-fragile Lexi Thompson.

Golf knows what scares you.