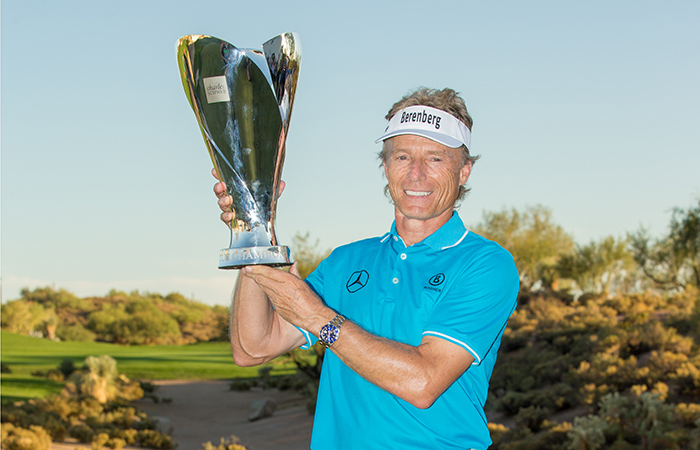 Bernhard Langer and the Charles Schwab Cup are old friends.

First — Phil Mickelson is the best player on the over-50 set — when he shows up.

Mickelson first.  Phil closed with a six-under par 65 Sunday and edged Kiwi Steve Alker for the championship.  It was Mickelson’s fourth win in just six Champions Tour appearances and he tied the great Jack Nicklaus as the fastest to four wins on the senior circuit.

Second, even though he finished 17th in the event, Langer still managed to win his sixth Charles Schwab Cup thanks to a mediocre closing 71 from overnight leader Jim Furyk.

The Schwab Cup was there for Furyk to win.  He could have become the first player ever to win both a FedEx Cup and a Schwab Cup but his game was off all day and that even-par 71 left him tied for fifth — too far down to overtake Langer in the points race.

It was an amazing effort by Langer, who hurt his back in the Wednesday pro-am and gutted it out during last Thursday’s first round.  “It was the most pain I’ve ever been in,” he explained.  “I could barely swing the club, I was close to pulling out (of the tournament).”

Langer played in every one of the 39 events in this “super season” and when asked why he still plays, he responded:  “I love the game and I’m still pretty good at it,”

As for Mickelson,  Phil said he’ll continue to play the regular PGA Tour with limited senior appearances in 2022.

“I’m shutting it down for the rest of the year,” said Mickelson, who finished 19-under par, a shot in front of Alker, who has the most amazing story of the season.  “Amy (Phil’s wife) and I will be celebrating our 25th anniversary and we’re going to take a few trips.”

Mickelson does have one obligation.  He’ll broadcast the Brooks Koepka-Bryson DeChambeau match in Las Vegas the day after Thanksgiving.

But other than that — Lefty’s earned his time off.

As has Langer, he still continues to amaze the world with his skill level at an age where he’s eligible for Social Security and Medicare.

Scotty Sheffler began the final round Sunday at Memorial Park as the overnight leader of the Houston Open.  He was still in great position at the turn to pick up his first PGA Tour win but then Jason Kokrak had other ideas.

Kokrak barely made the 36-hole cut at one-under par and looked like he’s shot himself out of contention on Saturday afternoon.

But when Scheffler began to falter over the final nine on Sunday, Kokrak came to life and never looked back.

Four straight birdies starting at the 13th powered Kokrak to a back-nine 31 and a closing 65 that earned him a third PGA Tour victory.

Two shots behind with six holes to play, Kokrak’s putter heated up and he blew past Scheffler and Martin Trainer and won for the third time in the last 13 months.

Kokrak holed a 12-foot birdie putt on the 13th to get in the mix and then made a 25-foot birdie putt on the 14th hole, the toughest at Memorial Park, to get within one shot. He hit wedge on the 115-yard 15th hole with a front pin to six feet to tie for the lead.  A mud ball forced him to layup at the par five 16th but he stuck a wedge approach to three-feet and made a fourth straight birdie.

He finished 10-under on the challenging Memorial Park — two better than Kevin Tway and Scheffler.  Scheffler will look back and know that three back-nine bogeys cost him yet another shot at that first win.