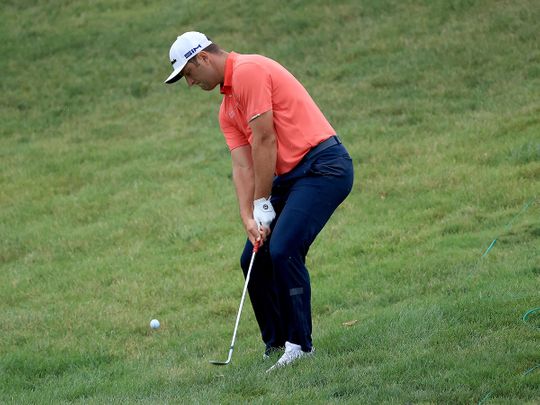 Odds are Jon Rahm never saw his ball move before he pitched in at the 16th.

PGA Tour, you’ve got a problem.

This is a head-scratcher.

The television viewing universe was under the impression that the Tour wouldn’t be using hi-definition, close-up camera work to determine penalties.  But that’s what nailed Jon Rahm last Sunday afternoon at The Memorial.  Right before he hit perhaps the shot of the re-start year, those hi-def, ultra-close-up cameras show that his golf ball moved ever so slightly when he addressed it with his wedge.

Rahm never saw it move.  To a man, when a tour player notices movement involving the ball, they typically freeze and stare at it, then stare at it a little longer then they’ll say something to their playing partners.  That’s the nature of this game, it’s a player’s honor on the line, perhaps his most valuable character asset.

The timing was also a source of major controversy.  Carlton “Slugger” White, the head rules honcho for the tour, advised that the tour wasn’t aware of the situation until Rahm was on the 18th tee.

This further complicates things for the future.

In these instances, all players are not receiving equal treatment as the cameras are only focusing on a very few contenders down the stretch.  “It would have happened hundreds of times this week — hundreds,” claimed Golf Channel guy Brandel Chamblee, a former tour player.  He pointed out the movement was “by the narrowest of margins.”  When the ruling came down, he admitted:  “I’m a bit surprised.”

Everyone should have been surprised.  The Tour had done away with bozos from the viewing universe calling in with possible rules violations.  Great decision.  The extension of that was that decisions were supposed to be based on what is discernable to the naked eye — and the movement by Rahm’s ball required ultra-close-up, high-definition cameras to detect the slight movement.

You could hear the Tour exhaling loudly when the penalty did not affect the outcome of the tournament.  But what if it had?

Yes, it’s one giant mess and there needs to be some common sense and clarification out of this.

At the worst, Rahm will know to be more careful.  But what about those “hundreds” of shots Chamblee referred to that went on all week with no cameras to be seen?

Yes, PGA Tour, you’ve got a problem, for sure.

With the WGC-St. Jude next week and the PGA Championship in two weeks, big name stars aren’t exactly flocking to the 3M up there in the controversial city of Minneapolis.

Yes, there are a few names sprinkled in there — Brooks Koepka, Dustin Johnson, Tony Finau and Tommy Fleetwood has emerged from European quarantine to get ready for the PGA.

This is what you call opportunity for someone to win and not have to overcome a field with the quality of last week’s Memorial event.

Matthew Wolff earned his way onto the Tour with a dramatic victory last year over Collin Morikawa and Bryson DeChambeau.  Niether Morikawa or DeChambeau are in this week’s field.

Koepka Says Knee Not The Cause Of Poor Play:

Speaking of world’s No. 6 Brooks Koepka, he revealed at The Memorial that he had an MRI on his ailing left knee last week before the tournament (Monday).  He finished Sunday with an ugly snowman (80) and finished in a tie for 62nd.  He stands at a lowly 154th on the FedEx Cup points list and unless things turn around, he’s in danger of missing the playoffs.

After this week, he’ll be at the WGC-St. Jude then he’ll defend his PGA title at Harding Park in San Francisco.

Koepka last week that the knee felt as good as it has “in a really long” time.  Koepka said he can walk uphill without any discomfort but that “downhill is a pain. It’s where the patellar (tendon) extends, and just trying to adjust going down hills. Sunday was the best it’s felt. I don’t see it being an issue.

“I just need to play good,” he said. “I’ve played so bad lately. Just trying to find things. Every week I feel like the results aren’t there, but it’s getting better and better. My good shots are good, but I’ve got to bring that bottom level up.”

Grayson Murray has had a tough time since the restart.  He’s missed two cuts and has withdrawn twice, including his last appearance at the Workday, citing a lower back injury.

He withdrew from this week’s 3M field when he tested positive for COVID-19 at home.

Murray posted on his Instagram account that he felt sick while at home last week, battling “symptoms of a migraine, runny nose and loss of smell/taste.” He expected to leave for the Minnesota event Saturday morning but instead got a rapid Coronavirus test and learned Friday night that he had the virus. He withdrew Monday and was replaced in the 3M field by Brendon de Jonge.

“I will be self-isolating at home and following the PGA Tour guidelines so I can get back out on the course as soon as possible,” Murray wrote. “If I’ve been around you in the last week and you start to feel any symptoms please go get tested!”