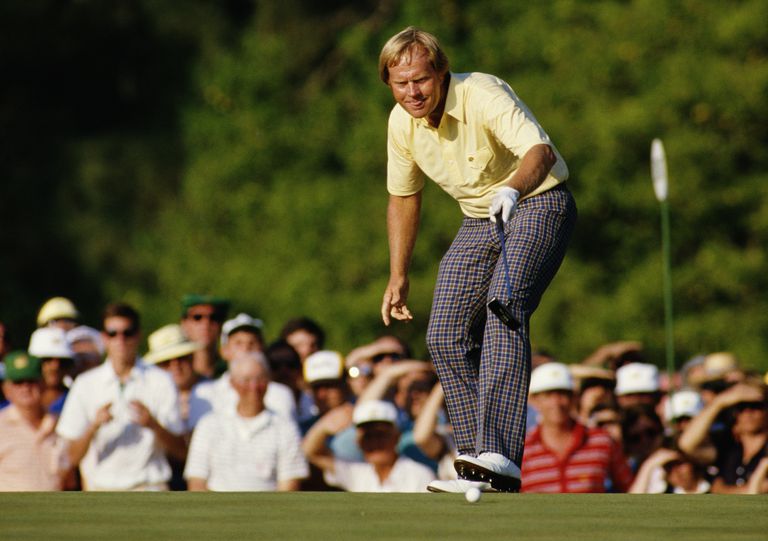 It never gets old watching Jack hole that birdie putt at the 17th -- Yesss Sir!

No Masters? No Problem — The Golf Channel Has Us Covered

Three harsh words that are so very, very hard to fathom.

April at Augusta National is typically our harbinger of spring.  The dogwoods and azaleas are simply dazzling.  The golf course is pure emerald green.  And yes, it is a tradition unlike any other.

But today, the grounds are deserted.

Augusta National Golf Club is closed.  There will be no one slipping on the iconic Green Jacket late Sunday afternoon.

For those of us who cherish this first major of the season, we’re left feeling pretty empty.

But all is not lost.  We have our memories of past excitement, magical moments that make up the history of the game.

The great thing about The Masters is that it is the only major staged at the same location every year.  We’ve come to know the holes by heart.  We know the magical shots that have taken place — Gene Sarazen’s four-wood into the hole at 15 for double-eagle back in 1935.  Jack Nicklaus’ ultra-clutch putt at the 17th that powered him to a sixth Masters victory at age 46 back in 1986.

Remember Fuzzy Zoeller’s putter flying high into the air when he won his Green Jacket in a playoff back in 1979?

Yes, there’s nothing quite like The Masters and now we have to make do without it.

The Golf Channel will sooth our emotional wounds this week.

The Golf Channel will play as the ultimate sports psychologist and life our spirits with the memories of Masters past.

Here’s what they have in store for us to open Masters week:

A look at Augusta National’s par-4 18th hole, and its longlist of unforgettable moments.

Trying to put a price on Tiger Woods’ putter that’s been in his bag for 14 major titles.

Rory McIlroy’s pursuit of the career grand slam at The Masters.

Reflecting on the 1979 Masters, and Ed Sneed’s moment of heartbreak.

Shane Caldwell’s emotional meeting with Tiger Woods at The Masters.

A stroll down Magnolia Lane through the eyes of Masters participants.

The forgotten details of what made the 1975 Masters so magnificent.

The underrated story of sportsmanship from Bob Goalby’s victory at the 1968 Masters.

An examination of the historical significance of Augusta National’s “Crow’s Nest.”

The immense impact of Tiger Woods’ first Masters win in 1997.

An improbable comeback: reflections of Woods’ fifth Masters title in 2019.

On Wednesday at 6:15 p.m., they will relive Nicklaus’ come-from-behind victory.

You may have to set you recorder for this one.  On Thursday at 11 p.m. they’ll have Tiger’s historic Masters win back in 1997.

The Golf Channel will also air all its Live From The Masters episodes.

For the cherry on top of the cake, you can go to this link on the Golf Channel page and see all the Sunday finals rounds from 1968 to 2019:

So we have some solace in the face of no Masters.

We can relive the memories because for now, that’s all we have.

We’ll make it through this and look forward to a November playing of The Masters!