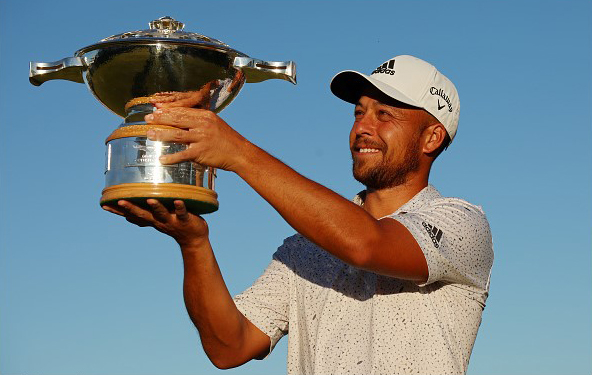 Xander Schauffele made it back-to-back wins on Sunday in Scotland.

“X” marks the spot at the Renaissance Club and Sunday Xander Schauffele left his winning mark on the Scottish Open, winning the event co-sanctioned by the PGA Tour and the DP World Tour.

“It’s just an honor to win the first one,” said Schauffele, who had won three of his last seven events and made this one a back-to-back victory.  “It’s special. It’s different playing over here. You’ve got to play golf differently. The fans are incredible. They pushed me long all day and this is definitely a nice win for my team and myself.”

Schauffele got off to a hot start with birdies at the first two holes.  Late in the round, a birdie at the par five 16th then an eight-foot par saver at 17 gave him a two-shot lead heading to the difficult 18th.  He played conservatively, finished with bogey and his final round 70 left him where he started the round — seven-under and a shot better than runner-up Kurt Kitayama.

This was stressful,” Schauffele said. “I’m not going to put makeup on the pig here. It was a very average day, probably my worst stuff this week. You can’t get ahead of yourself in links golf. I was ahead, behind, ahead, behind. I just kept my head down,” said Schauffele, who now has seven Tour wins.

Schauffele will head over to St. Andrews where he will try and pull off what Phil Mickelson did back in 2013 — win the Scottish then the Open Championship in back-to-back weeks.

Kitayama’s second place finish earned him a spot in the Open Championship.  Brandon Wu and Scot Jamie Donaldson also earned spots in this week’s field at The Old Course.

The rain-plagued Barbasol Championship came down to a dramatic finish Sunday afternoon when Trey Mullinax holed a clutch 15-footer for birdie at the 72nd hole to edge veteran Kevin Streelman by a shot.

Streelman tied Mullinax at 24-under par at the par four 17th where he took a risk and hit driver off the tee.  He hit it perfect, left himself 91 yards in and stuck his second inside nine feet and holed the birdie putt.

At 18, Streelman applied more pressure.  From 160 out, he hit a seven-iron to 10 feet while Mullinax left his approach just inside 15 feet.  It was a simple case of first one in wins as Mullinax holed his, gave it a huge fist-pump then stood back and watched Streelman miss his attempt to send things to a playoff.

“I stayed focused for 72 holes,” Mullinax said. “I missed a couple of opportunities with the putter and just told myself to keep putting, been putting great. Been hitting my irons beautifully all week, probably the strongest part of my game. I knew I was going to have that shot a couple of times, and I hit a great shot at the right time.”

Mullinax shot a final round 66 at Keene Trace and finished 25-under, a shot better than Streelman, who closed with 67.

“I’m frustrated I hit two incredible shots there the last two holes and hit two good putts,” Streelman said. “One of them went, one of them didn’t.”

Mullinax earned the last spot in this week’s Open Championship at St. Andrews.