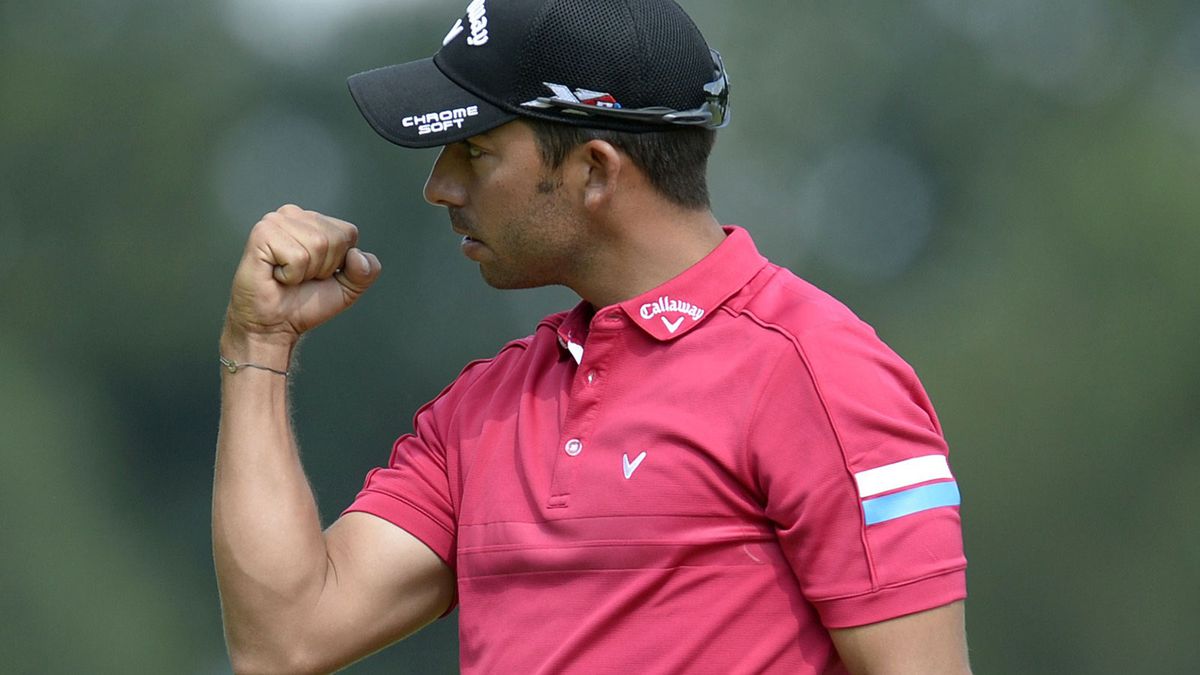 Pablo Larrazabal overcame a front nine 41 to win for the first time in four years.

It may be winter in the northern hemisphere but when the earth tilts, its summertime below the equator.

When players showed up at Leopard Creek Country Club in Malelane, South Africa last week, they were greeted by temperatures north of 100 degrees and for the first time in its history, the European Tour basically told the lads it would be fine if they wore shorts during the four sweltering days at the Alfred Dunhill Championship.

Pablo Larrazabal didn’t seem to mind the steamy conditions.  He chose long trousers and didn’t seem the least bit put off with the thermometers hitting 104 during the first round.  The veteran from Spain opened with 66, added a 69 then a third round 70 got him to 11-under par and that was good enough for a three-shot lead.

There was only one problem.

Seems Pablo had some golf shoes that didn’t fit properly.  That is difficult to fathom in a world where players depend on their feet to get them around the golf course.  The feet are the platform for the golf swing.  If you have a problem with your feet — you’ve really got a problem and Pablo had a big one.

He had a huge blister on the big toe of his right foot.

“I woke up this morning (Sunday morning) and I didn’t think I was going to play,” was how he described what was going on before he headed to the golf course.  “I couldn’t put my shoe on. I couldn’t walk to the buggy(car). I couldn’t go to the putting green.”

That was just the beginning of what would be a trying day for Pablo.

He tried to fight his way through the pain but on his first nine holes, he ended up with five bogeys (1, 3, 5, 8 and 9) a double at the par three seventh and a lone birdie — all that mess added up to a six-over par 41 and he’d basically fallen by the wayside — at least it appeared that way.  He went from a comfortable lead at 11-under all the way back to five-under with nine holes still in front of him, the blisters flaring.

Then he had a conversation with himself.

“I said to myself, you played the worst golf of your career and you’re just two behind. Keep struggling, put some heart on. I put some heart on the back nine.  If Tiger (Woods) can win on a broken leg (2003 U.S. Open), I can play with blisters.”

Pablo self-pep talk worked.  He steadied himself and played holes 10-14 in even par.  Charl Schwartzel was in the clubhouse at six-under, Larrazabal’s playing partner — Wil Besseling — birdied the 15th to get to seven-under.  Pablo matched Besseling’s birdie at 15 then added another at 16 and suddenly he found himself with a piece of the lead.

Leopard Creek proved a tough test, no one was tearing it up the last day.  Up ahead of Pablo and Wil, Sjoholm failed to par the short par five 18th (514 yards) and was in the house at seven-under.

The final twosome stood on the 18th tee, a good tee shot would make for a middle iron second shot into the par five.  There’s just one catch, the green is surrounded by water.

Larrazabal drove into the rough, his lie dictated a lay-up.  Besseling had a flyer lie and pulled seven-iron.  He made the mistake of going at a tucked pin and his ball ended up over the green, rolled through the long grass and finished up against the rocks on the wall above the water.  Pablo then hit an incredible wedge shot that stopped inside three feet.  He’d make it and overcame blisters, poor play for nine holes and a four-year winless drought.  Didn’t matter that he shot 75, it was miraculous considering his 41 going out.

He had just birdied three of his final four holes to post eight-under par and he was overjoyed to win on what he calls his favorite golf course.

Unbelievable, the way I won it,” he said. “It’s been a long road. I’ve really struggled the last few years. I’ve been working so hard,” he said.”

“This is a place I love, I will come back until I can’t play anymore.”

In the meantime, Pablo might want to make sure he finds some proper footwear.