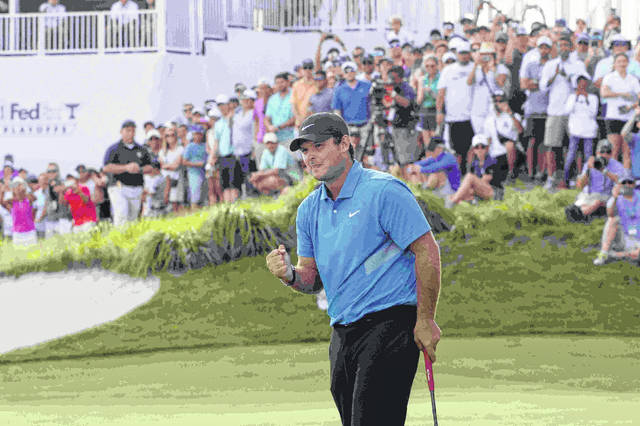 Patrick Reed got back in the winner's circle with a mistake-free final nine.

Like it or not, Patrick Reed is a winner again on the PGA Tour.

He picked a great time to find his form.

A mistake-free final nine holes Sunday at Liberty National earned him the Northern Trust title for a second time, this time, had to be really sweet, considering.

Reed hasn’t tasted victory since the 2018 Masters and it was back then when the golf world learned of his troubled relationship with his parents and his lack of love from fans everywhere.

“He plays with a chip on his shoulder,” is what the television talking heads say time and again when they refer to Reed.  What that phrase really means is that he’s aloof and is not well-liked.

Seriously, no one missed him this season while he struggled with his game.  And it was a struggle.  At one point, wife Justine, who obviously wears the pants in the family, called guru David Leadbetter for help.

Lord Lead couldn’t help and that brief look-see was pretty much that — a short look-see.   Thanks Justine.

Reed struggled all summer.  Coming into Liberty National, he had two top 10s.  He was miserable in the majors — T36 at The Masters, missed the cut at the PGA, T32 at the U.S. Open.  He showed some life at Royal Portrush and finished 10th at the Open Championship.  He played decent in Memphis (T12).

He finally found the formula at Liberty National, his stomping grounds during the 2017 Presidents Cup.

“It’s amazing, just to be back and to feel like I’ve been playing some solid golf and finally having it pay off and to come out as a victory, it’s been a while,” Reed said after his two-putt par at 18 for a 69 and the winning 15-under score.  “Been a little too long honestly but what better place to do it than here.”

Reed wasn’t emotional, no tears, no nothing.   “Really, it’s just the beginning,” he continued.  “It’s the first playoff event. So you know, the good thing was I felt like I’ve been playing well all year. To come out and get the W this week and climb up the board quickly and get up to second, now just go out, rest up tomorrow and start playing aggressive again and try to get up there as high as I can going into East Lake.”

Reed is now second behind Brooks Koepka on the FedEx reshuffle.

He’s there because he knew what to expect on the closing holes at Liberty National.

“I think the biggest thing was, you know, especially coming down towards the end, knowing that birdies are out here, people are going to be able to make birdies and so you’re going to have to go out and finish it off and make some birdies coming in.”

He did, Jon Rahm didn’t.

As much as Reed won it, Rahm lost it.

“I’m still obviously a little hurt, a little disappointed the way I finished,” said Rahm, who had the lead but came unglued with three back nine bogeys, including back-to-back at 14 and 15.  “I was playing so good up until 14 and kind of the theme of the last three days, 15 through 18, I just haven’t been able to finish it off. It’s as simple as that. You know, I’m going to be two shots short.

“I mean, you can pick two shots any time in the tournament. It’s easy to focus only on today, but it’s a couple things. I mean, the driver on 15, where I thought it was good, and it just didn’t fade back. The driver on 17, it was like, two of them a foot from being a perfect location, right. So that’s two shots right there that could have given me a better chance. It’s just what it is. It’s golf. I gave myself a great chance. I had a lot of fun and towards the end, I just couldn’t make the putts or I couldn’t get it done. It’s how it is,” Rahm continued.

“Patrick held it together, even though he wasn’t probably playing his best golf at first, and came back with a great birdie on 15, or 14, one of the two, and the birdie on 16 to take a two-shot lead. Well deserved, he’s been playing great all tournament.  He hasn’t made many bogeys, not many mistakes. That shows.”

It’s a fine line between winning and losing on tour and Reed finally got back on the winning side of that line.