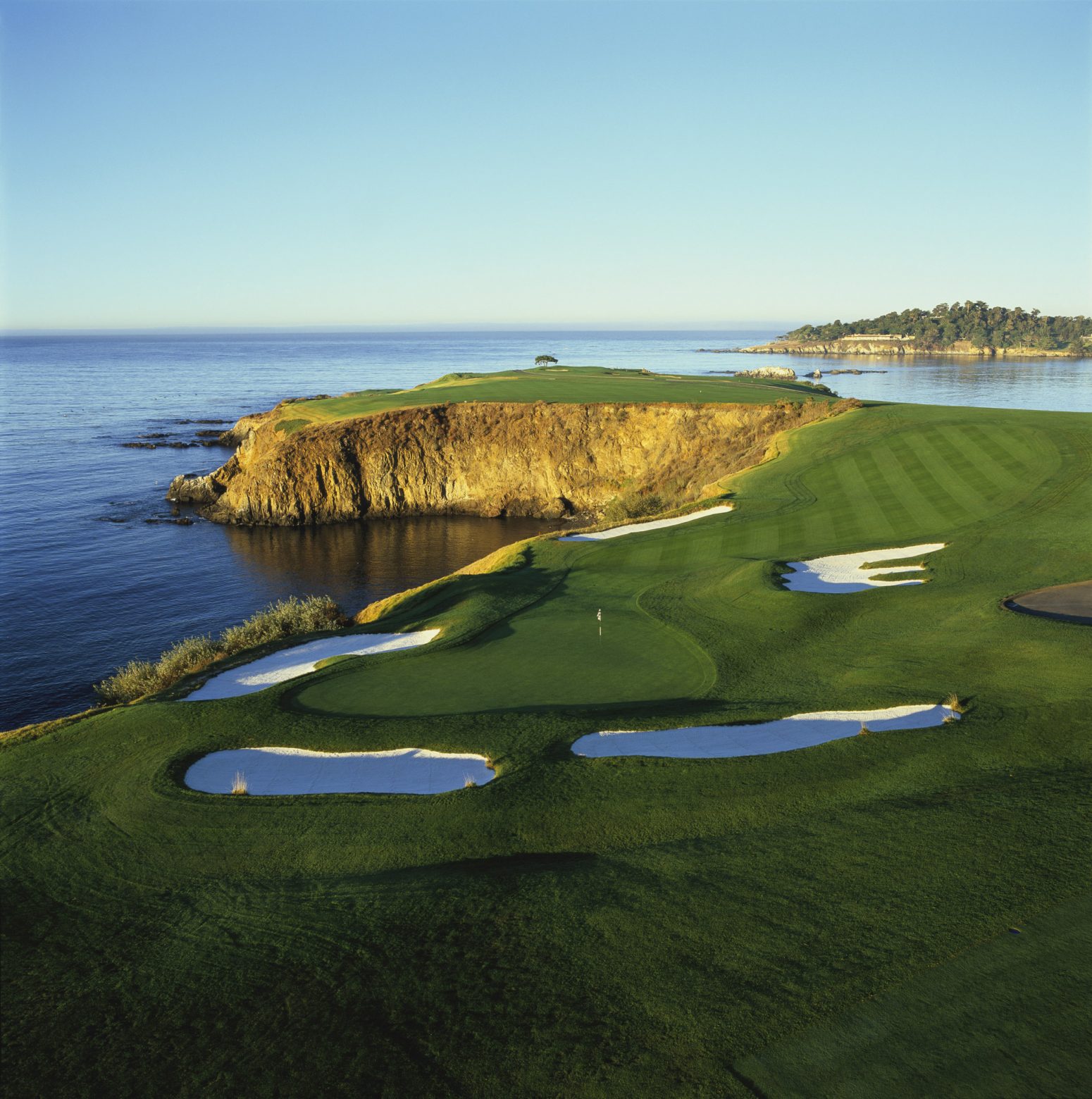 The second shot to the eighth hole at Pebble Beach is Jack Nicklaus' favorite in all of golf.

“If I had only one more round to play, I would choose to play it at Pebble Beach”

That pretty much tells us all we need to know about the spectacular Pebble Beach Golf Links, the true star of this week’s stop on the PGA Tour.

This is where the sea crashes against the craggy rocks and smooth beaches, it has vista unlike any other.

You could spend an entire year taking breathtaking photos of all Pebble has to offer and still wonder if you got it all.

This is a major departure from what we get week-in and week-out on the PGA Tour.  Those manufactured TPC courses that the tour loves to visit simply pale in comparison.  It’s the ultimate mismatch.

For the record, Spyglass Hill is pretty spectacular as well.  It’s part of the supporting cast along the Monterey Peninsula course.  We simply don’t get to see enough of those Pebble siblings, especially Spyglass.  CBS doesn’t have enough cameras to do justice over there.

Because of the three-course rotation, you don’t know who the true leader of the tournament is until Saturday afternoon.  It is then they make the cut, trimming the field to the low 60s pros and best 25 amateur teams.  They’ll have the honor of going 18 around Pebble on Sunday.

The weather was spectacular on opening day, Thursday.   Plenty of sunshine, light winds and warm temperature, warm for this time of year on the Monterey Peninsula.

Phil Mickelson, fresh off a long flight from Saudi Arabia and a third place finish at the Saudi Invitational,  kept his momentum from the Middle East.  Phil got around Spyglass in just 68 shots, which puts him squarely in the hunt as he defends his only title from last season.  After his win at Pebble Beach last year, Mickelson fell into the doldrums and didn’t have a top 10 finish until last week in Saudi Arabia.

Phil’s work on Thursday put him in front of pre-tournament favorite Dustin Johnson, who was three-under for his day at Spyglass with a 69.

Phil may be closer to a comeback than Jordan Spieth, who is desperately trying to find the form that won him three major championships.  In the Phil or Jordy matchup, Lefty prevailed, his 68 at Spyglass nipped Spieth by two as Spieth had a ho-hum day with country star Jake Owen. Spieth shot 70.

Mickelson and Spieth move over to Monterey Peninsula on Friday and it may be the most birdie-friendly of the three courses.  First round leader Nick Taylor shot a nine-under par 63 over there.

The guy who may be toughest to beat come Sunday is Pat Cantlay.  Cantlay, the highest-ranked player in the field behind D.J., tooled around Spyglass, using just 66 strokes.  His elite ball-striking skills will come in handy at Pebble Beach and he’s in the part of the draw that gets to play back-to-back there on Saturday and Sunday.

But more than the golf, the scenery is world-class.

This is an idyllic setting, a playground for the wealthy.

Sadly, they’ve taken advantage of Pebble’s fame and have upped the ante to $575 if you want to play the grandiose setting.  That doesn’t include a caddie or cart fee.

Which means most of us will simply kick back, relax and take in the beauty via the magic of television.

Nothing wrong with that.