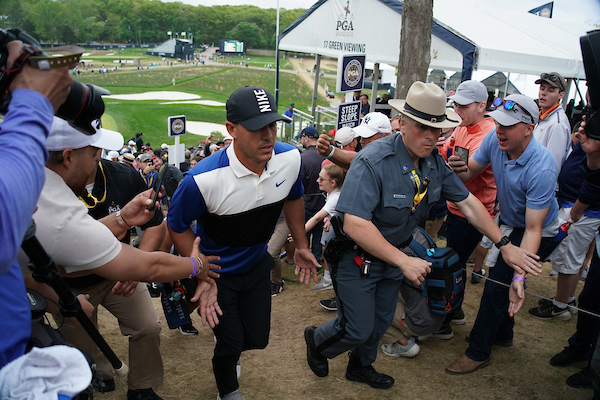 The sad part about staging a golf tournament in New York is that New Yorkers show up.

Sunday at the PGA Championship was just another example of how those folks up there have this ridiculous need to make themselves heard. Boorish behavior is their calling card.

The worst part of it all is that they are horribly unimaginative and just plain rude.

Screaming “Baba-Louie” as soon as a player makes contact with a shot?  “Mashed potatoes?”  “Get In The Hole!”  And they always feel compelled to scream.

Brooks Koepka got a full dose of obnoxious from those folks last Sunday.  Good news is he proved he’s a lot tougher than they are.

His playing partner, Harold Varner III, is from North Carolina where people are nice and hospitality is a way of life.

Varner was astonished by what he heard on Sunday afternoon while Koepka was grinding to win his fourth major.

“I thought it was pretty weird how they were telling Brooks to choke. That’s not my cup of tea,” said Varner.“I was pulling for him after that. I have a few choice words for that.”

Varner wasn’t the only one.  After seeing and hearing the ridiculousness of the unruly throngs, who wasn’t pulling for Koepka?

That’s easy,  the New York fans weren’t.  As Koepka left the 14th green with his fourth straight bogey on the scorecard, they were chanting “D.J., D.J., D.J!!”  Some were screaming “Choke, Brooks!”  Good news is Brooksie didn’t give a damn. In fact, he used the obnoxiousness as motivation:

“No, I don’t think so,” Koepka said when asked if it bothered him.  “I think I kind of deserved it. You’re going to rattle off four (bogeys) in a row and it looks like you’re going to lose it; I’ve been to sporting events in New York. I know how it goes.  Like I said, I think it actually helped. It was at a perfect time because I was just thinking, okay, all right. I’ve got everybody against me. Let’s go. Yeah, I mean, I definitely heard the cheers, too. But the chants on 14 green with DJ was — I think that’s kind of when Ricky probably mentioned — for that question earlier — when I was kind of in shock. Kind of all that was going on at the same time.”

The ill behavior wasn’t limited to Koepka either.  At the par three 17th, the screams came too soon in Dustin Johnson’s backswing.

Sir Nick Faldo and Jim Nance, the CBS superstars, were aghast, particularly Faldo.  “That was way too soon,” Faldo said of the screams.

D.J. went on to bogey that hole after a sloppy bogey at 16.  No one accused him of choking.

Toughest job out there was crowd control.  Those crowds constantly protested any attempt to move them out of the way when a player hit a wayward shot.  Something in their makeup seems to compel them to have their ugly mugs right there for the camera.

Good news is that Koepka survived, in fact, thrived on the bad behavior.  More evidence of how tough he really is.

Good news is that there may not be another major at Bethpage Black for a long time.

Bad news is that the Ryder Cup will be staged there in 2024.

The Euros will have to prepare themselves for much more than the golf course.