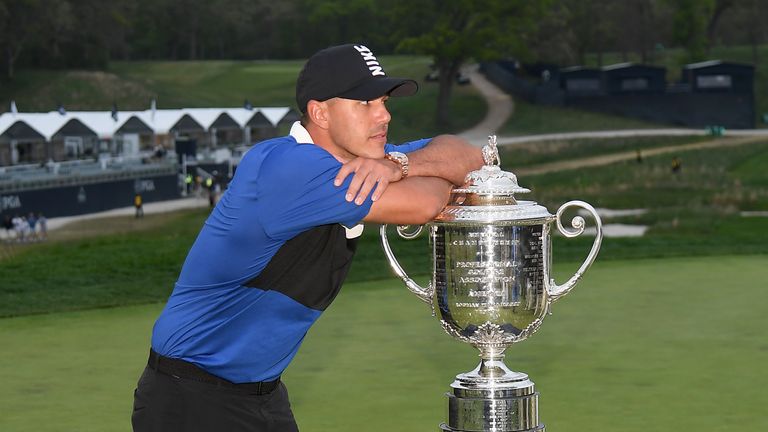 There will be no roars for Brooks Koepka at Harding Park in August.

PGA Championship Will Go Without Fans At Harding Park.

PGA Champion Brooks Koepka will have a lot of peace and quiet when he goes for a three-peat at Harding Park in August.

The PGA Of America now now verified what everyone suspected all along — the 2020 PGA Championship will be staged without any spectators on site at Harding Park in San Francisco.

The PGA Tour will see limited crowds next month at Jack Nicklaus’ Memorial Tournament at Muirfield Village where Tiger Woods is expected to make his first appearance since the re-start two weeks ago.

But California is a different animal from Ohio.

City officials have opted to prohibit spectators at Harding Park.  It’s not surprising.  San Francisco has a lot of people and California COVID-19 lockdowns have been strict.

Of course San Francisco Mayor London Breed did the old political two-step with a scripted statement:

“We are able to safely take this step toward reopening because of the ongoing sacrifices of our citizens, the continued committed work of our healthcare workers and the early action we took to battle COVID-19.”

Then PGA Of America Chief Executive Seth Waugh put in his two cents:

“We’d like to thank the state of California and the city and county of San Francisco for being terrific partners in helping us get to this place.  While the local community cannot be with us physically on-site, we will certainly carry their spirit of resilience and unity with us as we stage our major championship, on their behalf, for all the world to see and enjoy.”

Yes, Seth had a lot on his plate to start the week.

So yes, you can have a PGA Championship, the season’s first major, without fans.

But the Ryder Cup?

Webb Simpson’s win at Harbour Town jumped him to No. 5 in this week’s Official World Golf Rankings.

Rory McIlroy and Jon Rahm remain one-two while Justin Thomas leapfrogged Brooks Koepka into the No. 3 spot with Koepka now at No. 4.

Dustin Johnson fell to sixth, the first time in a long time he’s been outside the top five.