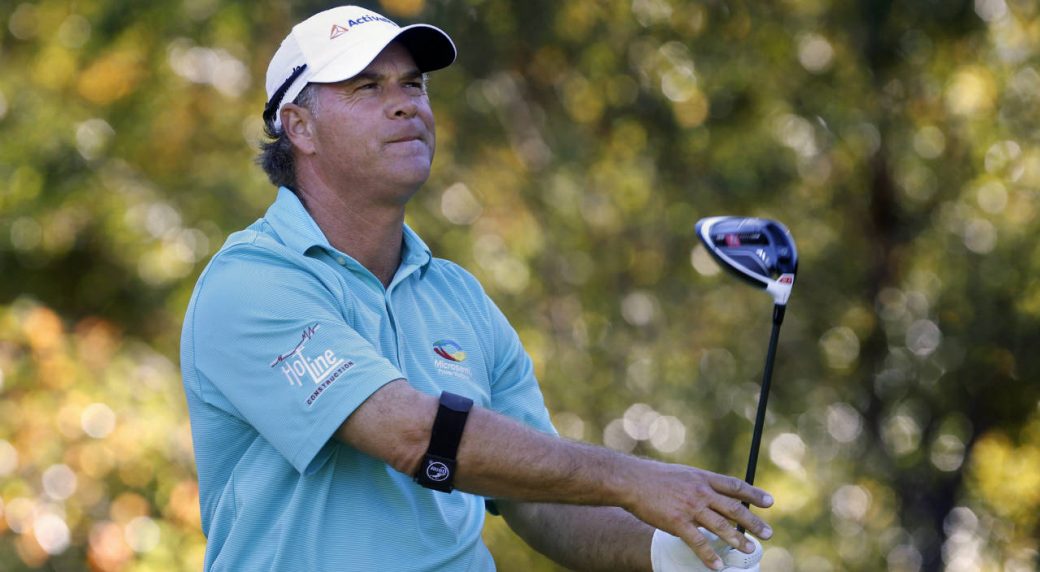 Schwab points leader Scott McCarron is ranked 2,066 in the world.

The PGA Tour has it’s own version of a retirement home.

It’s where old players go to pad their bank accounts if they’re still in good enough shape to get around for 54 or sometimes 72 holes.

The Great Old Geezer Exhibition season comes to a finale this week out in Phoenix at the Charles Schwab Championship — the old guys version of the regular tour’s Tour Championship.

Here’s a breakdown of the points leaders who will be in the fray this week at Phoenix County Club:

Scott McCarron:  He’s No. 1 on the points list and had three wins this season, which equaled his career wins on the PGA Tour.  He was a few steps above journeyman status during his regular tour days.  He’s currently 2,066 in the Official World Golf Rankings.

Jerry Kelly:  Of course No. 2 has to try harder and Jerry has new life on the senior circuit.  Like McCarron, he won three times this season and that’s how many regular tour events he won.  Like McCarron, he was just a notch or two above journeyman status.  He’s ranked 1,947 in the Official World Golf Rankings.

Bernhard Langer:  The ageless one just keeps on ticking, or should we say making birdies.  He was a bonafide world-class player in his younger days, unlike the two guys ahead of him on the points  list.  He won The Masters twice and had an eye-popping 42 wins on the European Tour.  He’s been the man on the old-guy circuit and is still a factor despite the fact that he’s 62.  Bernie’s No. 1,095 in the world rankings.

Kirk Triplett:  Three wins on the regular tour, nice guy, like McCarron and Kelly, a journeyman in his younger days.  Doesn’t even register in the world rankings.

Steve Stricker:  Stricks won 12 times on the regular tour.  No majors but Mr. Consistency.  Only played in nine senior events but picked up two wins.  He’s ranked 641 in the world, probably the best all-around senior who doesn’t play much compared to McCarron (25 events) and Kelly (22 events) and Langer (21 events).

And those are the top guys going into this finale.

When you take it all in, this tour is a tough sell.  It’s not the senior tour of Nicklaus, Palmer and Trevino.

No, there are no household names out there.

And that makes it a totally tough sell.