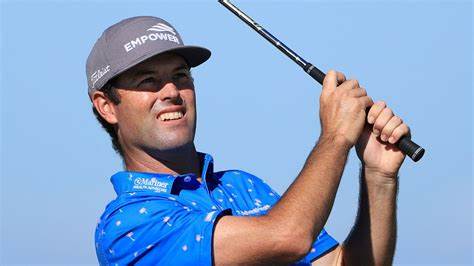 Robert Streb shot a career low round that included 10 birdies and an eagle.

On a day packed with highly-ranked underachievers, it was stealthy Robert Streb, yes Robert Streb, ranked No. 141 in the world, who stole the show on day one at the CJ Cup in Las Vegas.

Streb decimated the Summit Club with 10 birdies, an eagle and yes, a bogey.  The guy shot 61 with a bogey!

“Nothing super exciting in the warmup,” was how Streb described the start of his career day.  He got it going right out of the starting blocks with a birdie-birdie-eagle-birdie-birdie-birdie start that had him using just 29 shots going out at what seemed to be a very easy golf course.  “A really, really good start — it kinda just kept on coming,” was how Streb put it.

He had the 59 watch on but it ended when he bogeyed the par three 11th where his tee shot came up short and he failed to get up-and-down to save par.  But the two-time Tour winner rebounded with five birdies over his final seven holes to finish with his best round ever on the PGA Tour.

But wait, there was another big surprise, another player from low places in the world rankings.  Keith Mitchell, who has missed the cut in his last two events, came through with a 10-under par 62 that tied his career low round.  Mitchell, ranked 137th in the world, had a 10-birdie day, finishing things off with a birdie on the 18th.  “It was really great out there today,” Mitchell said afterward.  “I feel so much better about my game than I did the past two weeks.”

Next in the surprise line was social media darling Harry Higgs, who proclaimed he would do some appropriate drinking on the Vegas strip last week.  Higgs put together an eight-under par 64.

It was a day of low-ranked over-achievers and highly-ranked under-achievers.  To find a big name, you had to go through the list of players at six-under par 66 and among them was Masters champion Hideki Matsuyama and Ryder Cup star Scottie Scheffler along with European Ryder Cup stalwart Ian Poulter.

Rickie Fowler missed the cut last week at the Shriners but shot 66 last Friday.  He carried that momentum to this week and shot another 66 and was one of eight at that number.  “Last week I hada nice finish on Friday.  Today, I was picking spots, hitting shots.  Thankful for CJ having me here,” said Fowler who got in the field on a sponsor’s exemption.  Fowler took time to visit his old mentor, Butch Harmon last week in Henderson, NV.  “He liked everything I’ve been working on.  Got his stamp of approval,” Fowler said of Harmon.  “He (Butch) go play and keep trusting it.”  Fowler’s ball-striking was good — he was second in the field in Strokes Gained Tee To Green during the first round.  Fowler also went bogey-free for his first round.

World No. 2 Dustin Johnson is the highest-ranked player in the field but it didn’t show.  D.J. was awful for most of the day, errant tee shots were the culprit.  He hit only six of 14 fairways and finished two-over at 74, tied for 73rd.

Spieth Getting His Swagger Back:

Jordan Spieth hit 11 of 14 fairways on the day and finished in the group at six-under par, 66.  Spieth had seven birdies and just one bogey.

Xander Moves To Vegas, Gets Key To City:

Xander Schauffele is the newest resident of Las Vegas.  He was presented a key to the city by the mayor.  He got off to a slow start Thursday, shooting 38 on the front nine but rallied with a five-under par 31 coming home.

Morikawa, Koepka In With 67s:

It’s a home game for world No. 3 Collin Morikawa, who’s a member at the Summit Club.  He put together a five-under par 67.   Brooks Koepka got off to a very slow start.  Koepka was even par through 11 holes but got it going, playing his final seven holes in five-under par.  He finished with 67.

European Ryder Cup members Sergio Garcia and Viktor Hovland got back into action and their 67s earned them a tie for fourth.

Rory McIlroy was having a really good day.  He was six-under par through 16 holes but ran into problems on 17.  “Missed a three-wood right on 17 — messed around in the rocks (desert),” was how Rory described making triple-bogey seven on the par four.  He finished with a birdie at 18 for 68.  “A good putting round and really a good round overall,” McIlroy added.