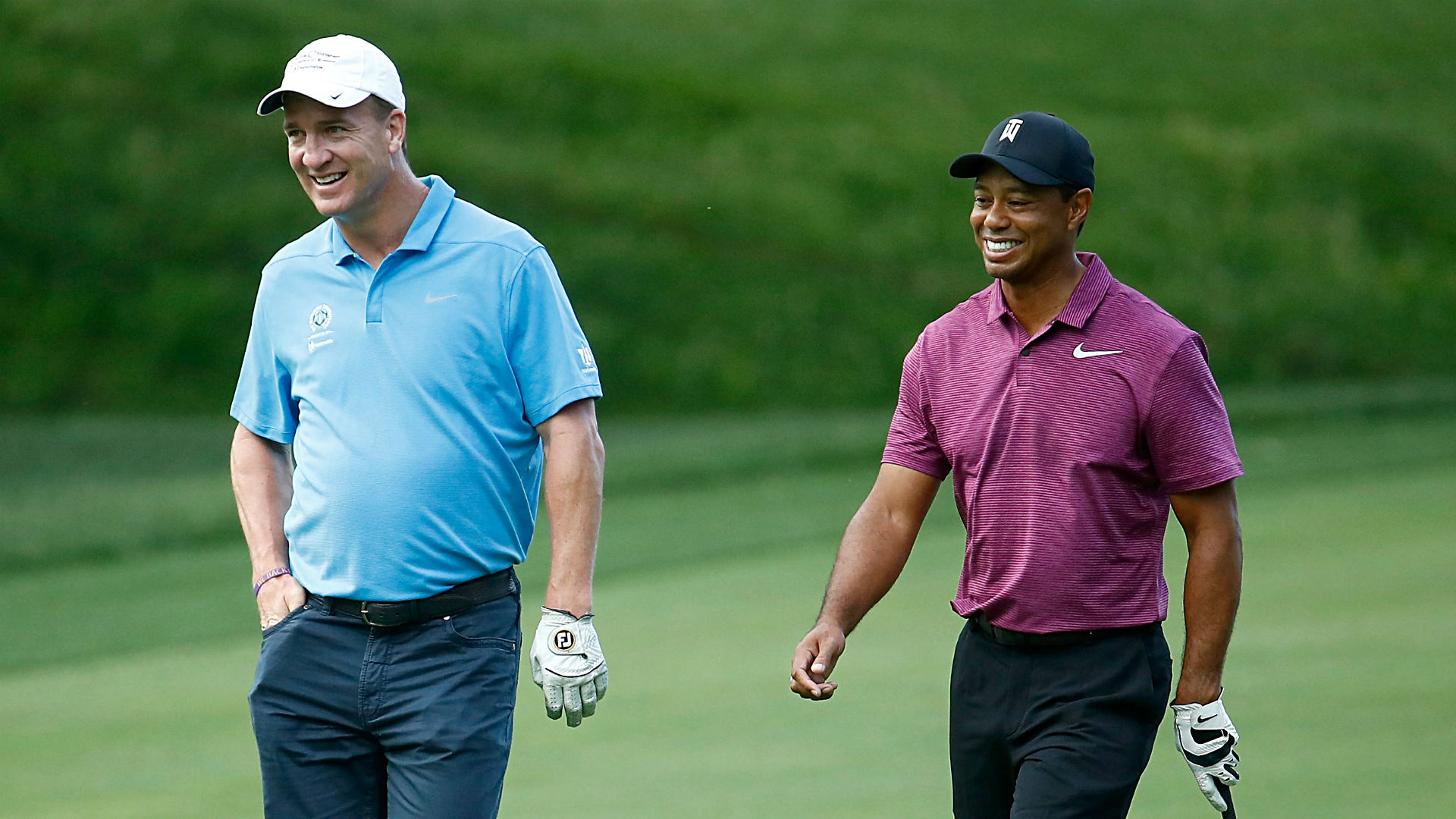 Look for Tiger's partner, Peyton Manning, to instigate some trash talking on Sunday.

Phil Mickelson has fired the first shot at Tiger Woods.

It was a good one, a bow shot, as they say in the Navy, letting El Tigre know that it’s on and that Phil has bragging rights from the last go-round.

This one has more star quality than last week’s bag-toting foursome at Seminole.

This one has all the makings of a trash-talk-fest and with the format on the back nine — a choke-fest to go along with it.

“I can’t wait to go to Tiger’s place and take him down,” Mickelson said this week.  “Tiger thinks he has a huge advantage playing there because he was insistent that this event is played on his home course. Despite everyone else wanting to play it elsewhere. That’s fine. We’ll take it to him and Peyton.  There will be no excuses. It’s his home course but Tom and I are going to go down there and put it to them, and we’ll make it that every time Tiger shows up at his home course, he’ll have a bad memory.”

The Rory-D.J.-Rickie-Wolff-fest raised right at $5.5 million for COVID-19 relief.

This Tiger-Phil-Peyton-Tom affair starts at $10 million and will go higher — yes, Tiger moves the needle in so many ways.

No bag-toting either.  All four players will have their own deluxe golf carts courtesy of Ez-Go.  And these are no ordinary carts.  They’re powered by Samsung SDI lithium battery technology, which is environmentally friendly, maintenance-free and comes with an 8-year warranty for personal use.

But wait!!  There’s more!  Tiger’s cart and Phil’s cart will be auctioned off as part of the All In Challenge auction which includes some pretty up-close-and-personal time with Tiger and Phil.

Okay, now back to “The Match” aka Capital One’s The Match:  Champions For Charity.

The Medalist, where Tiger practices and plays when he’s not on tour, is the setting.  It’s about 18 miles north of last week’s club — Seminole.  The Medalist is right there on U.S.  1 in Hobe Sound, which is just north of Tiger’s Fortress Of Solitude on Jupiter Island.  Jupiter Island is also the future home of Mickelson, who’s finally getting the heck away from California and its huge taxes.

The Medalist is a 1995 Pete Dye design.  It winds it way through some cool fresh-water marshes, its surrounded by environmentally sensitive lands.

Bobby Weed, a student of Dye, did a restoration of sorts.  Weed returned two cornerstones of the original design that will be conspicuous during the match: the revetted, stacked sod bunker faces and the nearly endless vistas over the surrounding freshwater marshes.

There’s plenty of room to drive the golf ball.  The green complexes are low-profile, unlike the elevated, treacherous Donald Ross greens we saw last week at Seminole.  Like Seminole,  you will see a well-manicured course.

What should make this one more interesting is the format.  Woods and Manning will go best-ball against Mickelson and Brady over the first nine holes.  Manning has a 6.4 handicap index, Brady’s is 8.1 so Brady may get a stroke or two on that side.  On the final nine — anything’s possible.  Modified alternate shot is the format and that means on every hole, players from both teams hit their drives, they pick one and play alternate shot from that point on.  And there’s where the choke-factor may come into play.  Strategy is paramount there and that’s where there could be some great back-and-forth between the teams.

The favorite?  Why Woods and Manning, of course.  They have double the number of Green Jackets the Mickelson team can garner.  Yeah, five for Tiger and one for Peyton.  Peyton has one because he’s a member at Augusta National.

The match doesn’t get underway until after 3 p.m. Sunday afternoon.  Could be a bit steamy with humidity pushing 70 percent, winds 10-15 miles per hour with a slight chance of storms.

Don’t be surprised if this one doubles that, easily.

After all, it’s Tiger and Phil and those quarterbacks will bring in some people who traditionally don’t watch golf.

Yes, moreso than last week, this one is a must-see.