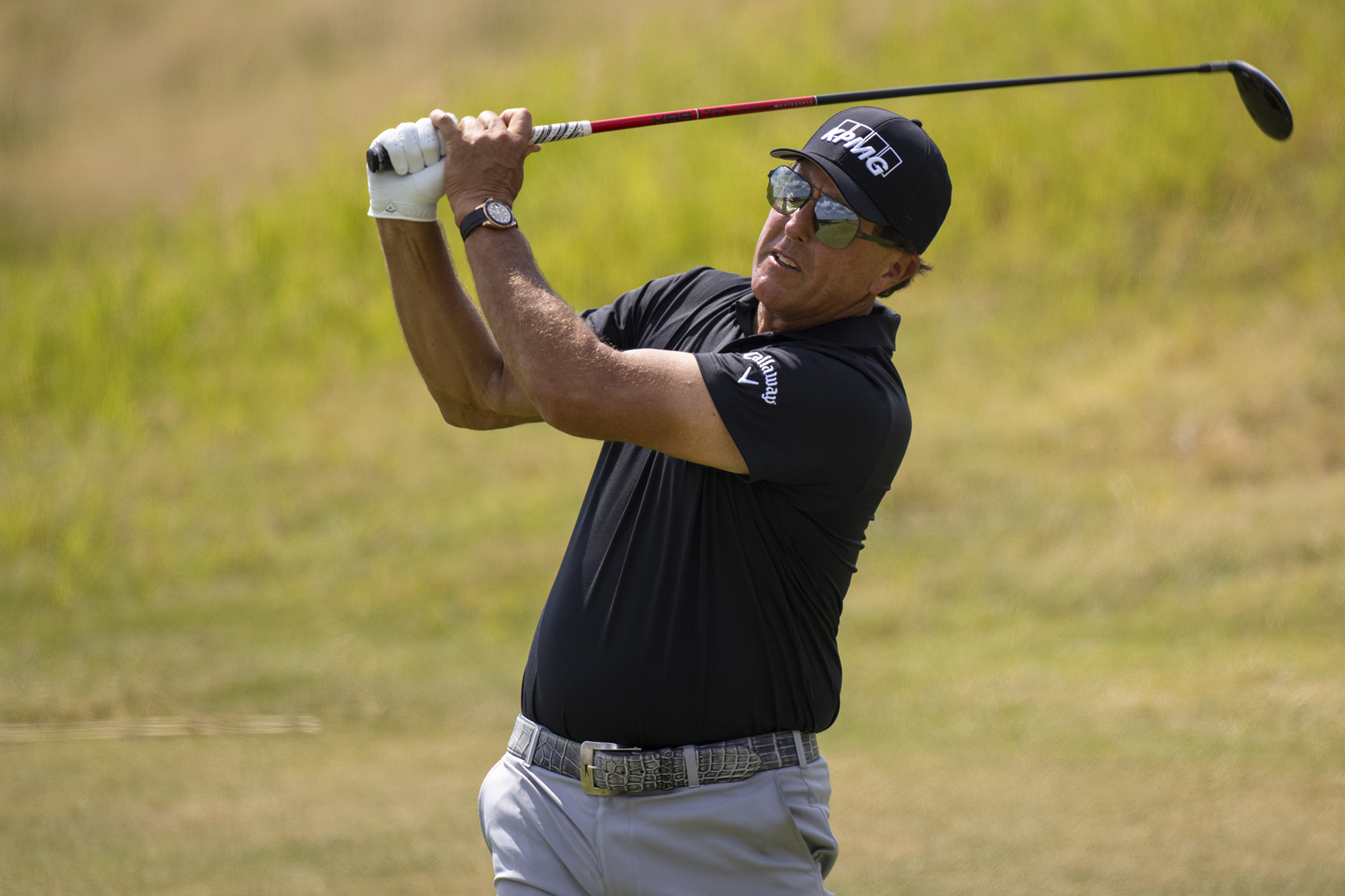 Phil Mickelson is proving to be a dominant figure on the over-50 set.

It was bad news for the rest of the hopefuls in the first time “Furyk And Friends” event at the Timuquana Golf Club outside Jacksonville as Mickelson out-dueled Miguel Angel Jimenez over the last four holes to make it three wins in four senior appearances.

It was an interesting Sunday afternoon as Lefty and Miguel basically pulled away from the rest of the field.  The two were tied at 13-under heading to the very reachable par five 15th where Jimenez saw his second come up just short while Mickelson pumped a beautiful six-iron to 10-feet for a potential eagle.  Jimenez then hit a sub-standard pitch and settled for par while Mickelson just missed the eagle, made a three-footer for birdie and took a one-shot lead.

Phil had an interesting brush with the rules at the par four 16th where he missed the fairway left (he struggled with his tee ball accuracy most of the round) and found his ball surrounded by a number of pine cones.  He moved a few, including one about a foot-and-a-half from his ball.  As Mickelson stood over the ball before his shot, the ball moved.  After a discussion with a rules official, it was Mickelson’s call and he deemed that he did not cause the ball to move.  Head rules official Brian Claar walked with Mickelson as he saved par at 16, heading to 17 to tell Lefty that after television review — he was totally in the clear.

Both Mickelson and Jimenez parred the 17th.  Both found the fairway at 18.  Jimenez didn’t make great contact with his approach and left himself 40 feet from the cup while Mickelson cruised a soft nine-iron from 134 yards out and stopped it inside of 10 feet.  Jimenez made a great run at his birdie, narrowly missing.  Mickelson then calmly sank his for a closing 68 and his 15-under par total for the 54 holes was good for a two-shot win over the Spaniard.

Steve Flesch (10-under) was the only other player to hit double digits under par and he finished solo third.

“I really enjoyed it,” Mickelson said as he’s won three of the four senior events he’s played in.  “I enjoy playing out here (Champions Tour).”  He was also complimentary of Jimenez.  “He played some really good golf.  He made a great up-and-down on 13 and the shot on 14 was really impressive.  That par three, that’s a hard pin, it rolls left of the pin, right of the pin. He just stuck it in there tight and wouldn’t go away,” Mickelson said about Jimenez. “I was appreciative that I was able to birdie two coming in and come out on top, but it was a tough day.”

As for Jimenez, he knew he had his hand full.  “On the back nine we’ve been there close, close, close, tie, and he make a birdie on the 15th, but I was close.  Then chance for birdie on 17, that’s the game, you know? He’s playing very well,” Jimenez said.

Mickelson also credited Furyk and wife Tabitha for the charity work they do in the Jacksonville area.  “Jim and Tabitha are wo of the best people in golf,” he added.

Lefty will venture back out to the Champions Tour in two weeks to defend his title in Richmond.