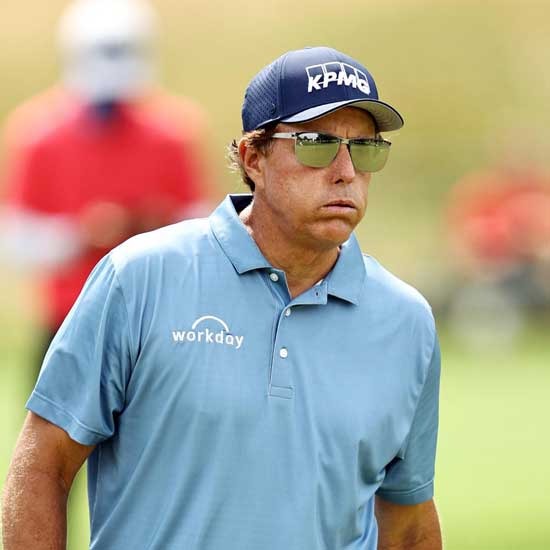 Thursday was a tale of two nines for Phil Mickelson.

Phil Mickelson started out with some great work at the Workday on Thursday.

Mickelson, the high-profile brand ambassador for this week’s name sponsor, went out in the afternoon wave and had one heck of a front nine at Muirfield Village.  Lefty was firing on all cylinders with four birdies over his first eight holes.  He had a great chance to make it five through nine when he hit his approach at the par four ninth within five feet of the hole.

But Mickelson missed that seemingly easy birdie putt and it was a harbinger of what was waiting for him on the back nine of Jack Nicklaus’ home course.

After a couple of pars, Mickelson was long at the par three 12th and failed to get up-and-down for par.  It was the beginning of Lefty’s afternoon nightmare.

He started missing fairways and two more bogeys came at 13 and 14.  He bounced back with birdie at 15 then made the mistake of hitting his tee shot in the water short of the green at 16.  That resulted in a double and he added another at the 18th from a bunker right of the fairway.  It all added up to a back nine 41 and a round that started so well, ended so badly.  Mickelson looked like a champ on the front nine, a chump on the back.

His 73 left him tied for 88th and in need of a good round on Friday to make the cut.  If he misses the cut, he’ll get another shot next week as he’s in the field for The Memorial.

Brooks Koepka played in the morning wave and his day was just the opposite of Mickelson’s.

Koepka, now ranked sixth in the world, returned to action after withdrawing from The Travelers then skipping last week’s event.

Koepka’s first nine holes was the back nine and it was a nightmare.  Three bogeys then a double at the 18th added up to 41, matching Mickelson.  But Koepka got his game in order and three front nine birdies got him home in 33 but his 74 left him in need of a low round on Friday to make the cut.  Koepka is skipping next week’s Memorial and will play the following week at the 3M.

Speaking of Koepkas, little brother Chase had a miserable day.  Twin nines of 40 added up to 80 and he’ll most likely be going home early.

First it was Nick Watney, then Denny McCarthy then Dylan Fritelli testing positive for COVID-19.  All three were in self-quarantine but back in action Thursday.

Here’s where it gets crazy.  All three still test positive for the virus but have no symptoms and with the time passage, have been deemed non-contagious by medical professionals.  Under PGA Tour protocols, they were allowed to play this week but cannot play with players who have tested negative.

So the Tour paired the three for the first two rounds at the Workday.

None of them played very well on Thursday.  Watney shot 77, McCarthy and Fritelli 73.  If only one were to make the cut, he would have to play by himself.

Jon Rahm, the world’s No. 2, is the highest-ranked player in the field.  He opened with an even par round of 72, a so-so start for him.  Rahm looked frustrated, pounding his driver on several tee boxes.  He hasn’t had a top 30 finish since the re-start.

Justin Thomas at No. 4 is the next highest in the field.  J.T. was solid and turned in a 68.  “I didn’t play bad but I didn’t play great by any means,” J.T. said after his morning round.  “I didn’t drive it well on the front nine.”

Not a great day for Bubba Watson.  He shot 43 on the front, the day’s high score on that nine, but got it around in even par on the back.  Still, it was a round of 79 for Bubba, who looks destined to miss the cut on Friday.