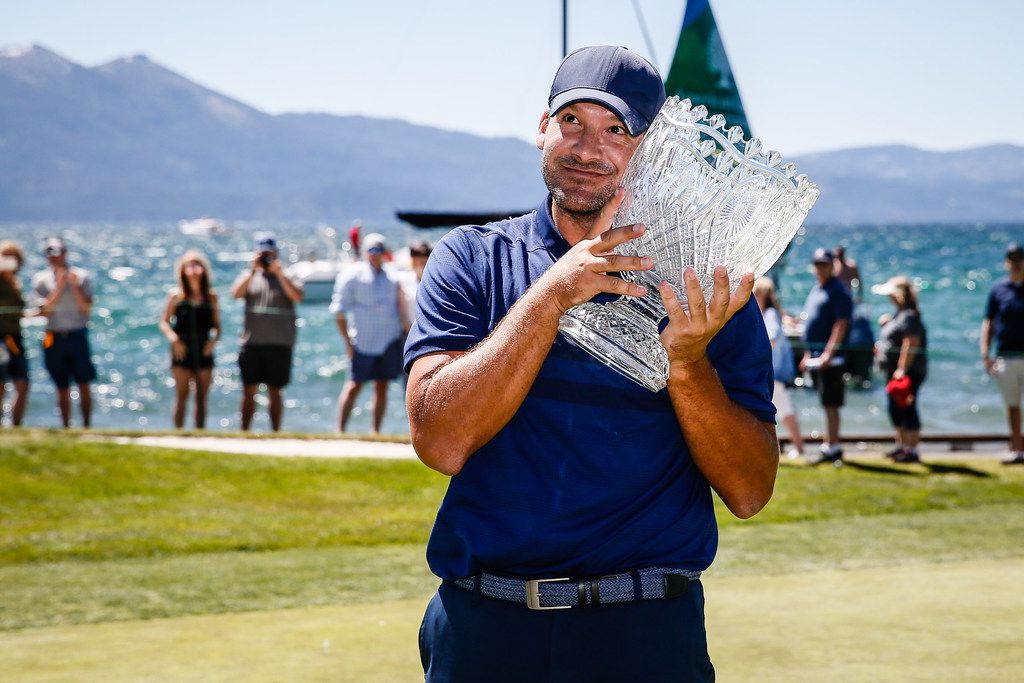 Tony Romo is the reigning king of the celebrity golf world.

You’ve probably seen this shindig in the past.  They play at the Edgewater Tahoe Golf Club and for an experienced amateur player like Romo, it’s not that big of a challenge.  The course is about 6,700 yards and plays much shorter than that.  Lake Tahoe sits around 6,200 feet above sea level, meaning Romo’s drives go a long way.

Add the fact that Romo has a lot of experience.  He’s played in Korn Ferry Tour events and is a regular at the AT&T Pro-Am on the PGA Tour.  Romo plays often in U.S. Open qualifiers, U.S. Amateur qualifiers and other amateur competition.  Make no mistake about it — Romo’s got game.

He won the championship for the first time in 2018 then won easily last year.  It would be an upset if he didn’t register the three-peat come Sunday in the 54-hole competition.

The event is played with the Modified Stableford format — five points for an eagle, two points for a birdie, zero for par, minus one for bogeys and minus 3 for double-bogey or worse.  Any bets on how far in the red Charles Barkley finishes?  This is one event where you don’t want to be in the red — plus numbers only.  Romo won with a plus 71 score last year, beating runnerup Mark Mulder by 10.  Mulder, a former major league pitcher,  is the only three-time champion of the event, winning in 2015, 2016 and 2017 and is regarded as Romo’s biggest challenger.

Former tennis star Mardy Fish finished tied with Mulder for second last year and Fish hangs around the lead in this event.

When Romo won last year, he donated his $125,000 first place money to the Stowers Institute for Medical Research.  Romo doesn’t accept the money so he can retain his amateur status in the eyes of the USGA.

The old “Hey Buddy Can You Spare A Dime?” sounds like the European Tour.  The European Tour has struggled financially, and now that the 2020 Ryder Cup has been moved to 2021, the Euro Tour won’t have that big payout coming in September.

That money from the Ryder Cup is basically the life-blood of the European Tour.  It’s not a fat-cat like it’s American counterpart — the PGA Tour.

The European Tour hauled in around 20 million pounds as its share of the revenues from the 2018 Ryder Cup matches in France.  The European Tour gets about 60 percent of the European revenues with the other 40 percent split evenly between the British PGA and the PGA of Europe.

So now the old cash flow problem will rear its ugly head.

Not to worry.  Because there is the guaranteed future revenue from the matches, the European Tour officials can visit their friendly London bankers and borrow against those future monies.

Speaking of the European Tour, it’s finally back in action as well.

Big surprise on day two when Miguel-Angel Jimenez showed the younger guys how it’s done.  He opened with 68 then went low on Friday with 65 and is the 36-hole leader at 11-under par.

Joost Luiten of the Netherlands was the first round leader at the Austrian Open, first of two events in the country.

Luiten fired a seven-under par 65 on day one but cooled off a bit on Friday with a 70 and stood a nine-under through 36 at the Diamond Country Club in Atzenbrugg.

After two weeks in Austria, the tour moves on for a half-dozen events in the U.K.  Most of the tour’s stars are waiting for that swing to resume their play.