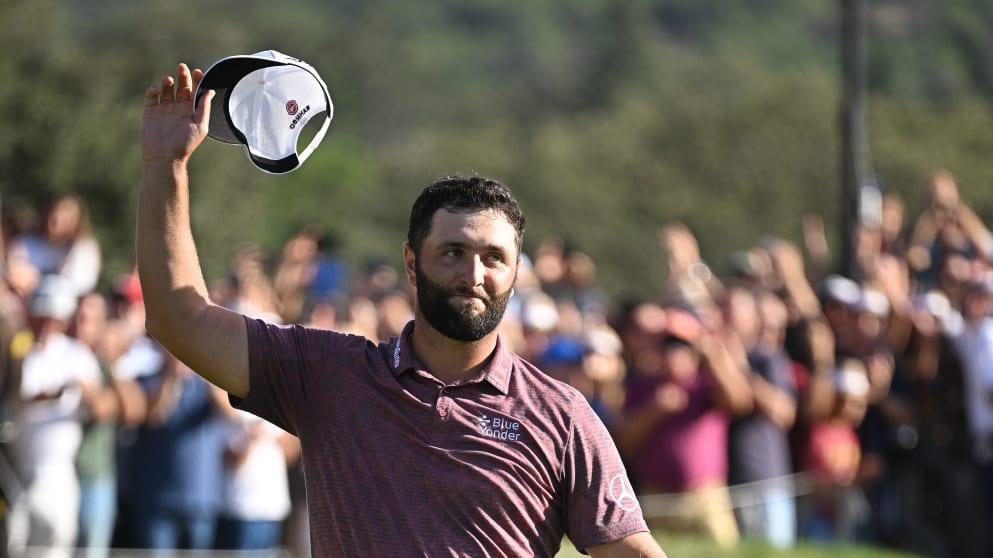 Jon Rahm closed with a sensational 62 and got a standing ovation.

Jon Rahm did was he was expected to do on a sunny Sunday at Club de Campo Villa de Madrid in front of thousands of his countrymen — he won the Open de Espana for a third time.

Rahm closed this one out in style, shooting a magnificent nine-under par 62 that took him to 25-under as he blew away the rest of the competition and joined the legendary Seve Ballesteros as the only two men to win this one three times.

There was little doubt as to who would step into the winner’s circle when Rahm nearly made a double-eagle at the par five 14th.  After his drive found the left rough, he had 208 yards in.  His second was on a perfect line.  It hit on the front of the green and started on a path straight toward the hole.  His ball bounced off the flagstick, nearly going in before stopping just inside five feet.  Rahm holed the eagle putt and went to seven-under, sealing the victory.

He added a little more spice for his home country galleries with birdies at 17 and 18, leaving him six shots clear of runner-up Matthiew Pavon of France.

How did it feel to join his idol, Ballesteros, as the event’s three-time champion?

“You might need to ask me in a few days because I take quite a while to process these things,” Rahm said as he walked off the 72nd hole.  “It was the goal coming in;  Seve is a great hero of mine and to do something he took his whole career to do in just a few years is quite humbling.  It’s emotional. Going up the 18th hole I knew what was about to happen and to get it done like that, I can’t describe it.  He (Seve) wasn’t really somebody I really thought of that much until I got better at golf, because obviously I wasn’t good until I was like 13 or 14 and when I started getting better, I learned a lot about him and what he did.

“I’ve spoken many times about how that 1997 Ryder Cup and Seve making the win that week, some friends of my dad’s started me playing golf otherwise who knows what else I’d be and I’m here because of that alone, and everything else is down to the path that he’s paved for so many of us,” Rahm added.

Waiting for Rahm by the 18th green were his parent and grandmother.  His wife and children were back home in the U.S.

“My lowest round, my lowest score out here, it was pretty much a perfect week and the only thing that would make it better was if my wife and kids were here,” Rahm said.  “It was the first one, the newest one with Eneko so I’m glad that’s it’s certainly after each kid that I’ve won a tournament, but I have a lot of family here I don’t see throughout the year.”

It took her 245 events but on Sunday at the Saticoy Club, Jodi Ewart Shadoff earned her first career victory on the LPGA Tour.

She squandered a four-shot lead early in the final round of the Mediheal championship but kept her composure and eventually emerged with a one-shot win over Yuka Saso.  Shadoff’s closing 71 got her to 15-under par, a shot better than Saso and two clear of Georgia Hall (65), Danielle Kang (67) and Paula Reto (69).

Shadoff started the final round at 14-under par and was four shots in front of Reto.  Shadoff was one-over through the first six holes, Reto, three-under and they were tied at 13-under.

After making the turn one-over, Shadoff rallied with birdies at the 12th and 14th holes and was tied with Reto at 15-under.  But bogeys at 16 and 17 cost Reto a shot at the championship.

“That last 1-footer felt like 20 feet to me,” she said after her big moment.  She became the 10th player this year to win for the first time on the LPGA Tour, one short of the record set in 1995. None of the others had to wait this long.

As far as the early blown lead, she had thoughts on that.  “I learned that I could fight through adversity. I can play under the nerves, which it’s been kind of a problem for me in the past, is just trying to settle the nerves down and play through it,” she said. “I think I proved to myself that I can do it. I proved I can win. It’s been a long time, and like I could, I didn’t think I would ever be sat here honestly. Just really grateful.”

Rookie Eugenio Lopez Chacarra, who went from Oklahoma State to the LIV-exhibition-circus series, beat all the (overpaid) big-name stars this weekend in Bangkok.

Chacarra shot rounds of 65-63-69 (19-under par) on a birdie-friendly course where even Phil Mickelson was able to shoot under par.  Mickelson shot 69 in all three rounds but all that got the Defector-In-Chief was a 17th place finish.

Underachieving Bryson DeChambeau had a stellar week, finishing 14th while the highest-ranked player in the field, Cam Smith, took the week off and finished 42nd.