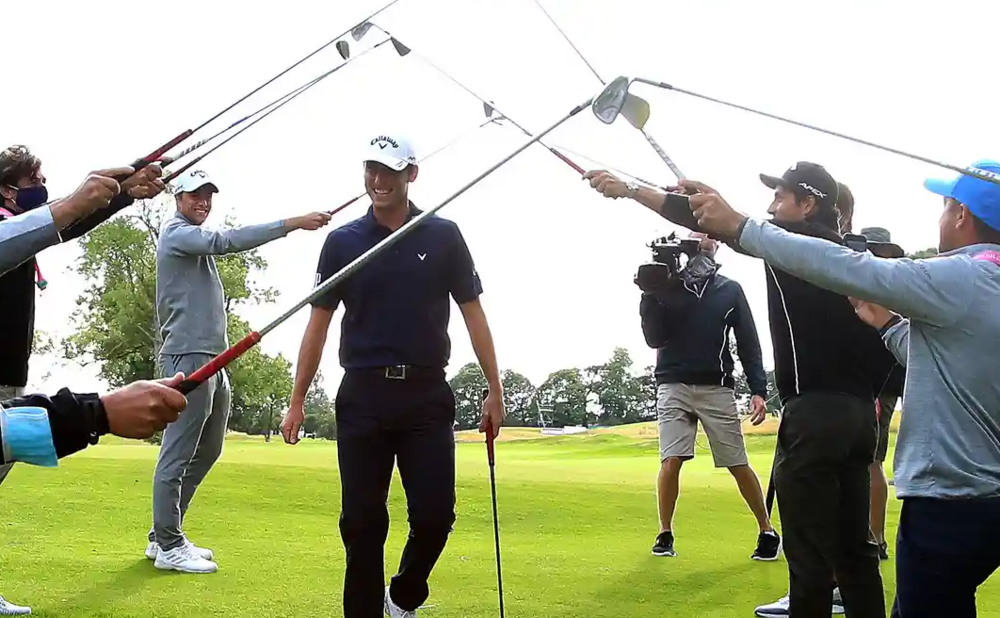 Renato Penatore got an "honor guard" greeting from his fellow players.

How popular is Renato Penatore with his fellow players on the European Tour?

To answer that all you needed to see is what they did to greet Penatore after his victory Saturday at the British Masters.

The players lined up and crossed their club clubs, forming a sort of golf honor guard as Penatore passed under the crossed clubs.

It was the second European Tour win for the 23-year-old Italian, who has a lot of game and is known as one of the faster players on the European Tour.

He’ll head to this week’s second of six events in the U.K. — the Hero Open at the Marriott Forest of Arden Golf Club outside Birmingham.

Lee Westwood won’t be at this week’s WGC-St. Jude although he previously committed.  He won’t play in the season’s first major, the PGA, either.

Westwood had cited the 14-day required quarantine as his reason but that policy has changed.

The White House has eased travel restrictions for players, caddies and other essential personnel entering the United States to compete on the PGA Tour.  Players were informed late Friday  that the move is based on groups who are “subject to COVID-19 testing and screening through the Tour’s rigorous health and safety protocols throughout a tournament week” and that they won’t be subject to the current 14-day quarantine period.

“I know they’ve dropped the two-week quarantine now, but I still don’t feel comfortable and I don’t feel like it is right to jump on a plane for 12 hours,” Westwood said. “I’ve felt like out of my comfort zone this week, so, if I got to Memphis, I would feel uncomfortable playing golf tournaments at the moment.”

Another reason Westwood may be staying home is his performance this past week at the British Masters, which was played on his home course — Close House.

Westwood shot 70-71 and made the cut on the number.  He shot 72 on Friday but blew up and closed with 79 on Saturday to finish 70th — dead last in the field.

Lee might want to get in a little more practice time.

The LPGA Tour gets its restart this week in Toledo at the prestigious Inverness Club but don’t look for any of the top South Korean players to be there.

They may also pass on the season’s first major, the Women’s British Open.

World No. 1 Jin Young Ko, No. 3 Sung Hyun Park, No. 6 Sei Young Kim and No. 10 Hyo Joo Kim are not among the commitments to play at Royal Troon in Scotland next month.

Hyo Joo Kim’s agent confirmed the coronavirus pandemic remains a factor in scheduling plans, with Kim being careful amid the threat.