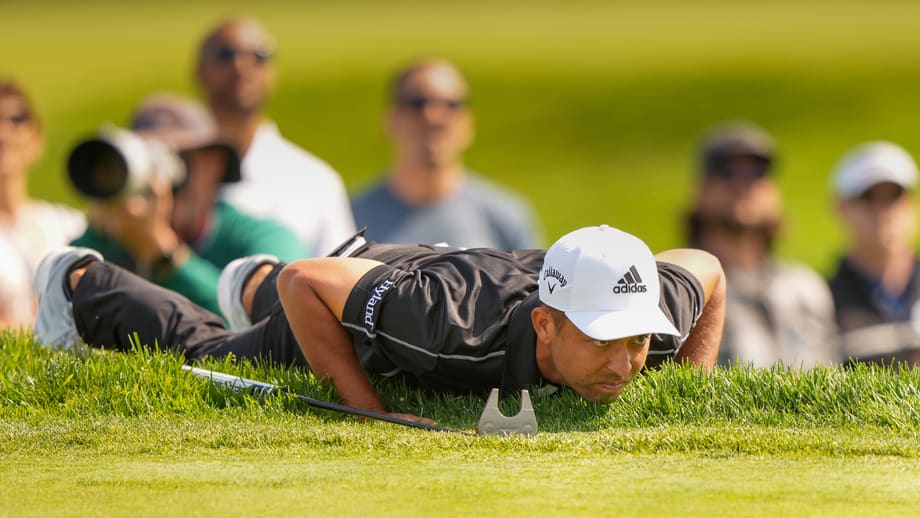 Xander Schauffele has been getting a worm's eye view to read his putts.

With Phil Mickelson seven shots back at the halfway mark of the 121st U.S. Open, the hometown San Diego fans are gathering around one of their own — Xander Schauffele — who is only three shots off the lead heading into the final 36-holes.

“I was walking down the first fairway today with my dad and we were joking about how six or seven years ago, when they announced this site here on TV, my dad and I were sitting on the couch, and we were like, Hey, we need to do whatever we can to get into this tournament,” Schauffele said earlier this week. “Here we are sitting here trying to win the thing.”

Schauffele played the first two rounds with Mickelson but may bring the bulk of the local support to his side on Saturday.

Perhaps a first in U.S. Open history — young Viktor Hovland had to withdraw on Friday.  He caught sand in his eye hitting bunker shots during his warmup and he tried to play with blurred vision but it only got worse and he withdrew after nine holes.

“Hit a bunker shot in my warm up today and caught some sand in my left eye.  “Typically, when faced with such an unfortunate circumstance, the remedial action is to blink a few times for the sand to clear. However, the unique San Diego sand decided to linger. Much like the stubborn belly fat we all possess even after countless of hours of cardio.  With a greatly diminished eyesight in the oculus sinister (left eye), the plan of attack was to try not to implode on the first few holes in order to have a chance to make the cut when eye sight had been regained.”

Hovland ended with: “All jokes aside, hate to withdraw but will be back soon.”

Hatton was the only player among the world’s top 10 to not play the weekend.

Simpson snapped a long streak of making cuts at majors.