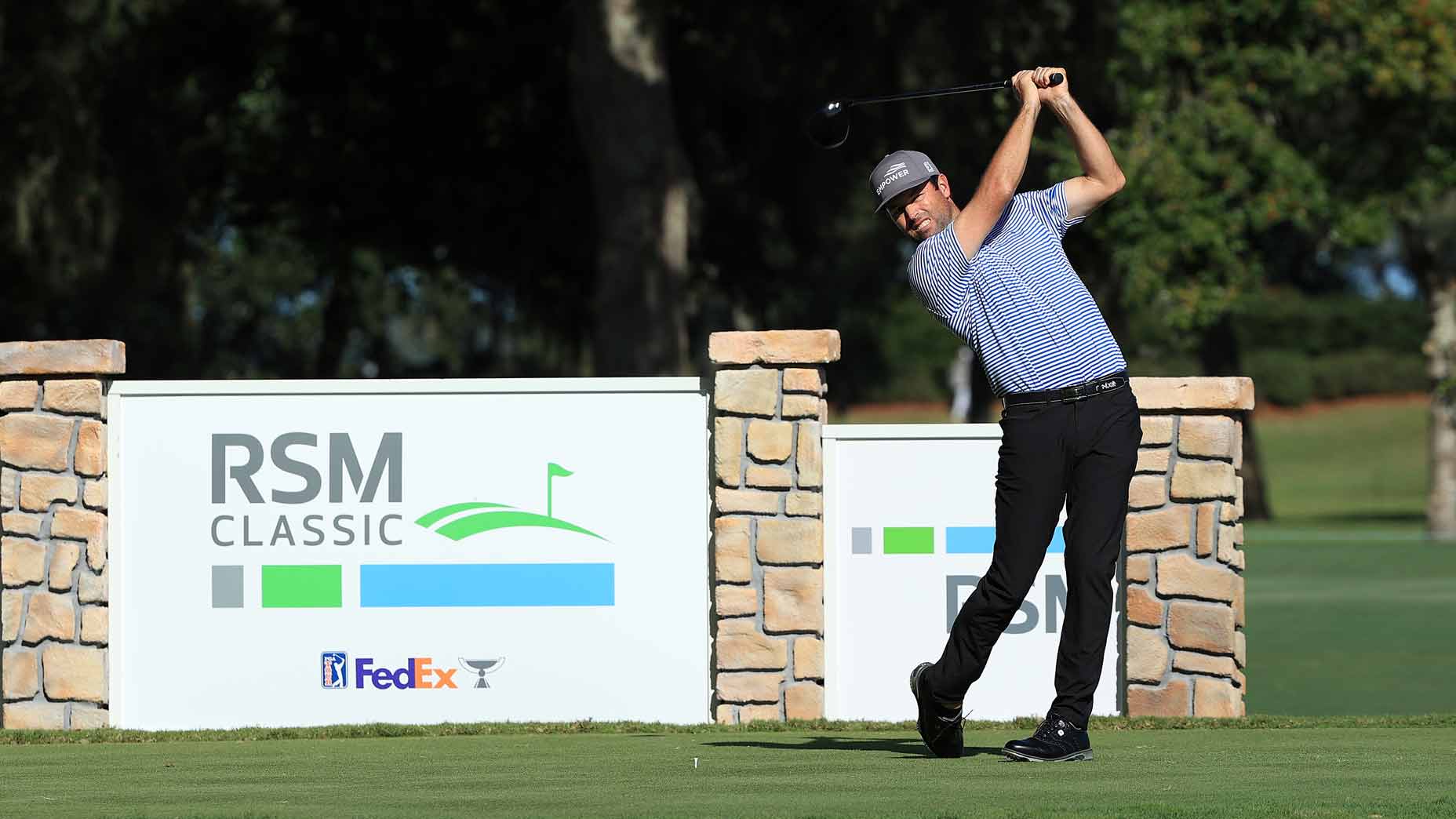 Robert Streb is one of those outliers — guys who have trouble keeping their Tour cards — he’s gone back and forth between the PGA Tour and the Korn Ferry Tour and this week it all came together for him at the RSM Classic.

Streb overcame some putting failures down the stretch, held on and tied hard-charging Kevin Kisner then beat Kisner on the second playoff hole Sunday afternoon on the Seaside course at ritzy Sea Island.

Streb had conditional status and made it into this week’s field after missing cuts in two of his last four events.  His only big success came at this event in 2014 when it was the McGladrey.

The journeyman found himself with the overnight lead after rounds of 65-63-67 got him to 17-under par.  But with perfect playing conditions for the final 18 — very little wind and balmy temperatures, he found himself with a birdie shortage.  That allowed a bunch of players to close the gap on him, including Kisner, who was a hole in front of Streb and took the lead with a birdie at the par five 15th.  Kisner was 19-under at that point then parred his way in, shot 63 and posted his 19-under then waited for Streb.

Streb’s putter had carried him into the lead but it let him down on the back nine.  H missed from five feet at the 13th for par then three-putted from just outside 60 feet when he hit that par five 15th in two.  Things were looking gloomy as he trailed Kisner by a shot with the difficult 17th up.  From 205 yards out, he hit a gem of a shot to 14-feet and made it to get to 19-under.  A par at the last sent it to a playoff.

On the first trip down 18, Kisner missed a good look from 14 feet, made par then watched Streb hole a clutch eight-footer after he came up short of the green from the left fairway bunker.

The second time down 18, Streb got it past the bunkers and had a nice lie in the left rough while Kisner’s drive found a gnarly lie in the right rough.  It was then that Streb selected pitching wedge and hit a perfect shot.  It landed just short and nearly went in for an eagle-two, stopping just inches away for a kick-in birdie.  Kisner’s shot went long-left and he tried to hole it.  It went 20 feet by the hole and he made the long par putt.  Didn’t matter, Streb’s tap-in was a gimme and he had his second career win, both coming at Sea Island.

“I don’t have an answer,” Streb said quickly when asked what about Sea Island was right for him.  “I felt fortunate to get in a playoff,” Streb said, recalling his shaky play down the stretch.  “I was happy not to be in the fairway bunker (on second playoff hole).  I hit a pitching wedge and it came out perfect.  It’s nice to get another win.”

Streb was fortunate to finish with 68 and still win.  Scores were low.  Kisner’s 63 got him in the playoff.  Cameron Tringale shot the week’s low round — and eight-under par 62 that earned him third place at 18-under.  Bernd Wiesberger shot 63 and tied for fourth while Harris English tied Tringale’s 62 and finished in a tie for sixth.

The Sea Pines jinx held true once again as a strong group of tour players call it home.