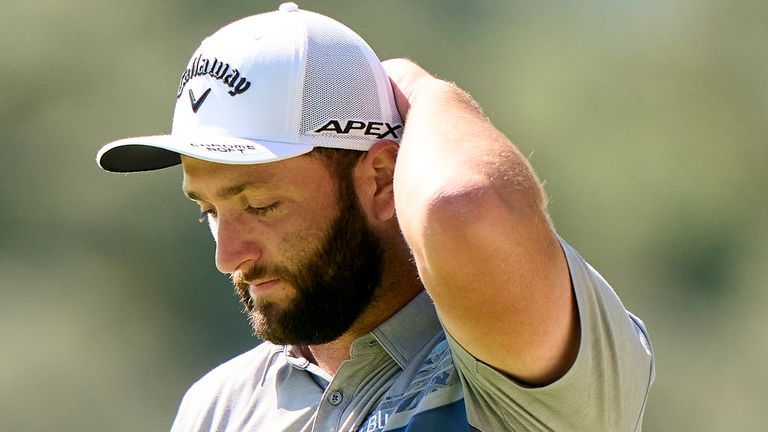 Jon Rahm hit only four fairways during round one and paid the price.

It was a total stunner, horrific in fact and a collapse of major proportions by world’s No. 1 Jon Rahm when he started the first round early Thursday morning at the Andalucia Masters.

On this particular day, the challenge of Valderrama was intensified by swirling winds that tormented most of the field throughout the day and turned Rahm upside down.  He played the back nine first and found bogeys at 10, 12, 13 and 15 then threw in a double-bogey at the menacing par five 18th for good measure.  The world’s No. 1 had just shot 42 to start this big-time event in the southern part of his home country.

The large crowd following Rahm found themselves groaning more than cheering.  There was nothing to cheer about as Rahm made the turn.  He did manage six straight par then bogeyed the seventh, parred eight and nine and posted a seven-over par 78, tying the worst round of his career on the European Tour (2018 Open Championship) and he was shut-out on birdies — none, zero, nada.

Playing partner Rafa Cabrera Bello was on the opposite end of the spectrum.  He putted lights-out and shot a three-under par 68, a shot off the lead of Julien Guerrier of France.

“It’s a tough and intimidating course without wind,” said Cabrera Bello.  “Three pars in a row equals a birdie.  I felt I did everything pretty good.  I pretty much made everything inside eight to 10 feet and that was the difference for me.”

Rahm ran into problems with his tee ball accuracy.  He hit only four fairways and that’s a formula for disaster at Valderrama and that’s what Rahm experienced.

Only two players in the morning wave broke 70 — Guerrier and Cabrera Bello.  In the afternoon, Romain Langasque of France made it just three players breaking 70.

In all, only seven players managed to shoot one-under par 70.

Not so much for Cabrera Bello, who rose to the occasion last week and won the Open de Espana.  He has carried that good play with him to Valderrama.

Making the cut isn’t impossible for Rahm, but he’ll need a great effort on Friday.

Renton Laidlaw Was The Vocal Master Of The European Tour:

Back in the 90s, the Golf Channel didn’t have much live play — the European Tour became its staple for events and it was on those early Thursday, Friday, Saturday and Sunday mornings that we came to know the wonderful voice and style of Renton Laidlaw.

It was a sad day for golf when Laidlaw lost his battle with COVID last week, passing away at age 82.

His broadcast style was marvelous.  No shouting, no boring statistics.  Laidlaw knew how to paint a picture of the action with his words.  A bad shot from a contender might draw a line like this from Laidlaw:  “That wasn’t very good now, was it?”

He was our tour guide to all those wonderful courses the European Tour visits.

His career as a golf writer started in Scotland in 1962 but his vocal talents opened the door for broadcasting and that’s where he made his everlasting legacy.

He knew how to set the stage as players battled down the stretch.  He inspired many of today’s BBC broadcasters.

He was to European Tour broadcasts what Seve Ballesteros was to action on the course.  Renton was without peer.

He will be missed by many but memories of that magical voice remain with those of us who tuned in back in the day to that European Tour action.