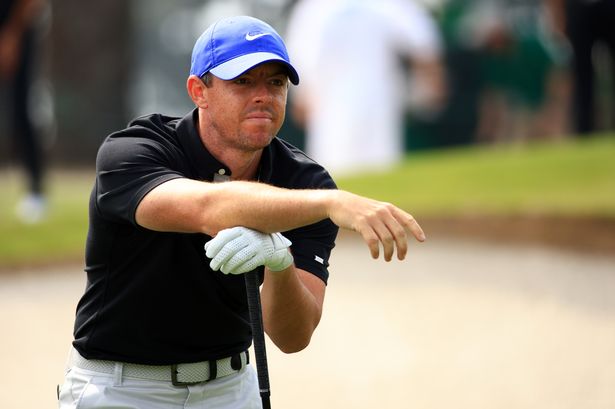 Rory McIlroy's "A" game has taken an extended vacation.

This is Wells Fargo week outside Charlotte at big-boy course Quail Hollow and we can’t help but remember how good someone used to be on this track.

Fast forward to this week’s 2021 version of the championship and that Rory from six years ago has gone missing in action.

The last time we saw The Pride Of Northern Ireland was at The Masters where he looked pretty clueless with rounds of 76-74, missing the cut, badly.  Since then, Rory has slipped in the Official World Golf Rankings, checking in this week at a lowly 15th.  Seriously?  One-win Tony Finau is now ranked higher than Rory.

Time flies and on Tuesday, Rory turned a ripe-old 32 and his game has regressed the past two seasons.

So what’s the deal?

“We all know where Rory’s weaknesses are,” McGinley explained not long after Rory admitted he was chasing more distance, coming under the evil influence of distance-obsessed, driver-crushing, rules-arguing, U.S. Open winning, Masters-floundering Bryson DeChambeau.  “His (Rory’s) approach play particularly, over the last 12-14 months, has really fallen off the planet, especially with his short-irons. If you look at his statistics from 50 to 150 yards in, he’s ranked around 200th on the PGA Tour, which is not far from last.”

McGinley couldn’t believe his ears when Rory confessed to the Bryson-inspired distance hunt.  “I couldn’t believe it when I heard Rory say that, but I’m not surprised,” McGinley said.  “Professional golfers are like sheep, we are going to follow somebody who is having some success. What’s incredible is that one of the best drivers of the ball that we’ve ever seen in the game (Rory) thinks that he might need to find another 10 or 15 yards.”

McGinley believes McIlroy should follow the lead of world’s No. 1 Dustin Johnson.

“With the addition nowadays of all the monitoring devices, it’s about hard work, application and dialing in the numbers. Look at Dustin Johnson; he’s had a phenomenal run over the last six or seven months, and he spends three-quarters of every practice session working on shots from 50 yards to 150 yards,” McGinley pointed out.  “He (D.J.) hits very few drivers and very few long-irons, his work with coach Claude Harmon is mostly about dialing in the scoring clubs, and it’s the same with his putting.”

McIlroy made a big change in March.  He started working with instructor Pete Cowen.  Obviously it’s a tough task to come to a major after making that sort of switch and it showed with Rory’s play at Augusta National.

Michael Bannon had been Rory’s instructor since he was a youngster and as McGinley put it:  “Nobody knows Rory’s swing better than Michael.”  McGinley also shared his observations about Rory’s swing:

“When McIlroy’s swing goes off, the problem is normally down to fundamentals, it’s never something massively wrong. I’d hate to see him having to learn a new swing under a new coach.”

Which brings us to this week’s Wells Fargo and Quail Hollow, a place where Rory has had enormous success.

So it’s a tough call on Rory this week.  He hasn’t played since The Masters and it’s getting to be about that time for him to find what’s been dormant inside him.

It’s time for Rory to step up and with his resume, hopefully Cowen didn’t try and rebuild the swing.

McGinley hit the nail on the head — everyone knows where Rory’s weaknesses lie.

Time to get rid of them.