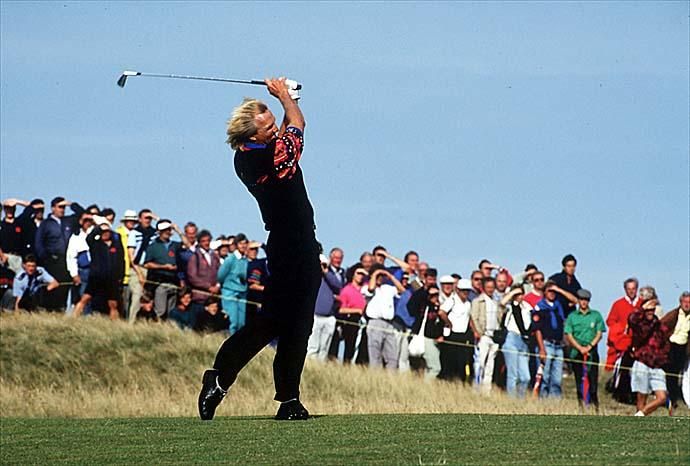 Greg Norman was the world's best with the driver when he won in 1993.

Royal St. George’s is England’s most iconic Open Championship venue.  It all started back in 1894 when the course hosted the first championship staged outside of Scotland.

The course is a pure links layout — about 7,200 yards, par 70 and it sits on the banks of the English Channel.  It has major undulations in the fairways and greens.  It is fully exposed to the sea and winds that can blow north of 20 miles per hour are common.

This course has a strong variety of golf holes — each has its own distinct feel.  Dunes are integrated with the fairways.  There’s a great view of the English Channel on holes four through eight.

The routing itself resembles a figure eight.  It’s a demanding venue and this year, there is an emphasis on driving as frequent rains in June and early July have seen the rough grow thick, long and lush.  Back in 2003, Tiger Woods lost his opening drive in the thick stuff.

In the modern era, Royal St. George’s has produced a variety of winners — some were major underdogs.  Ben Curtis was a 500-1 longshot when he won in 2003.  Same for skinny Bill “Buck” Rogers back in 1981.  Greg Norman, however, was the best player in the world when he hoisted the Claret Jug in 1993.  Most recent champion was 2011 winner Darren Clark, who won his first and only major at the tender age of 42.

With the variety of winners, it’s not a given that the bombers have any distinct advantage.

For a tour of Royal St. George’s, click on this link:

While the best players in the world will be at Royal St. George’s this week, the PGA Tour makes sure that “all those other guys” have a place to play this week.

There are only four events left before the PGA Tour “playoffs” get going and this week the Barbasol Championship provides a points opportunity for all those guys on the playoff bubble.

Keen Trace Golf Club’s Champions Trace course outside of Lexington is hosting this “Shaving Cream Open” for the third time.  The event, like the Open Championship, was cancelled last year, thus 2019 winner Jim Herman is the defending champion.

Charl Schwartzel, Luke List and Chesson Hadley are in the field this week.

Zach Johnson was ready to head over to the Open Championship — until he wasn’t.

Johnson played in the John Deere Classic, he has to, he’s on the tournament board.  Anyway, he wasn’t able to get on the special charter flight on Monday after the tournament as he tested positive for COVID.

Alternates Adam Long, Sam Horsfield and Dylan Fritelli have all made their way into the field.