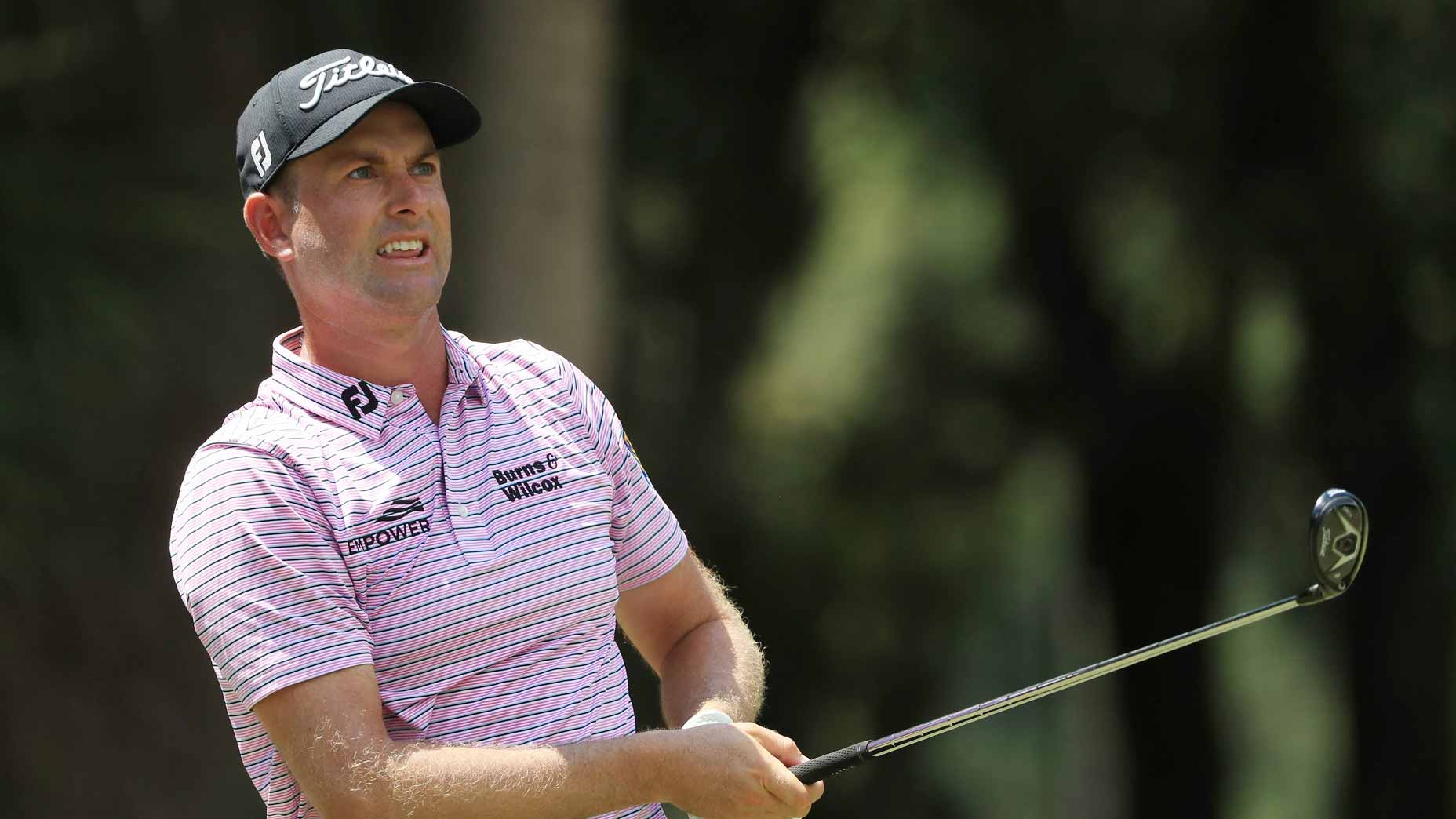 Webb Simpson was back inn action for the first time since the Phoenix Open.

The Concession Golf Club is a punishing track where bombers have no strategic advantage and that was very evident Thursday as Webb Simpson and Matt Fitzpatrick, two non-bombers, short-gamed their way to the top of the leaderboard at the WGC-Workday.

Simpson had just one bogey while Fitzpatrick had none as both used their skills around the greens to full advantage on their way to six-under par 66s under sunny, perfect Florida skies.

Simpson hasn’t played since the Phoenix Open in early February but his game was spot on.  “It’s a challenge,” Simpson said of the Concession as he and the rest of the field got their first look at it under competitive conditions.  “I played nine holes on Tuesday,, nine holes on Wednesday.  Today I was still learning the course.  It’s a very challenging golf course.  We were talking about where we were going to miss if we didn’t hit the green.”

And Simpson’s strategy worked to perfection.

Fitzpatrick leaned heavily on his short game as his ball striking wasn’t quite that good.  “I played pretty well last week,” said Fitzpatrick, who finished tied for fifth at Riviera.  “Today, I was aiming left and pushing it right, aiming right and pulling it left.  I picked the right part of the green to hit with my chips and that’s what we did really well today.”

One big name a shot back of them was Brooks Koepka, who hadn’t even seen the back nine, playing only the front in a practice session.  “I hadn’t seen the back nine yet,” Koepka said when asked about shooting 35 on that nine and 32 on the front.  “You don’t have to hit driver out here.  It’s nice to get on Bermuda greens.”

Tied with Koepka at five-under were Cameron Smith, Sergio Garcia and Billy Horschel.

Rahm was low man among the world’s top 10 players.  Only nine made it to the course as seventh-ranked Patrick Cantlay withdrew.  He was suffering from dehydration and a very upset stomach.

Dustin Johnson played the way Cantlay felt.  The world’s No. 1 shot his worst score of 2021 — a five-over par 77 as nothing went right for him after switching to a new driver.  No. 3 Justin Thomas birdied three of his last four holes just to shoot 73.  Xander Schauffele signed for a 71, Tyrrell Hatton shot 70 as did Collin Morikawa.  Eighth-ranked Rory McIlroy’s 69 should have been a lot better but McIlroy missed three putts inside five feet.

Distance-obsessed Bryson DeChambeau, who won the 2015 NCAA individual title on this course, found that his added size and length was no advantage as he found trouble often and finished with a 77.

There wasn’t enough wind to play havoc on day one but if it does show up over the weekend, the course will get even tougher.  Cantlay wasn’t the only WD.  Matt Wolff had a harrowing day, shooting 39-44 for a whopping 83 and The Concession lived up to its name as Wolff withdrew from the tournament, didn’t give a reason for his “concession.”

While the big names get guaranteed paydays at the WGC-Workday, the hoi-polloi of the PGA Tour are down at the Puerto Rico Open and it was Tommy “No Card” Gainey setting the pace on Thursday.

Gainey, winner of the McGladrey Classic back in 2012, lost his Tour card and has been on the Korn-Ferry Tour.  He is trying to get back to the PGA Tour and took a step in the right direction with his 65 at the Grand Reserve Country Club.

There were six players lined up behind him at six-under par including Robert Garrigus, another one-time Tour winner who lost his card and is trying to battle his way back after fighting substance abuse.

This is one of those go-low events as 36 players broke 70 on day one.  It’s also the event where no one wants to be the defending champion.  Last year’s winner — Viktor Hovland — used the win as a springboard to bigger things and is in the WGC field this week at the Concession Golf Club.