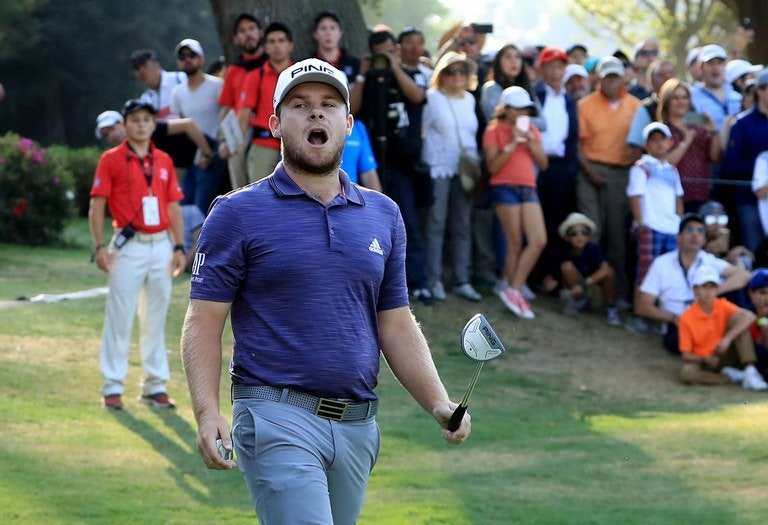 Sole Survivor: Hatton Holds On, Outlasts Everyone At Arnie’s Place

The Arnold Palmer Invitational was the most brutal test of the 2020 PGA Tour season.  Bay Hill took no prisoners.  It embarrassed the best.  In the end, it was  Tyrrell Hatton holding on to get his first PGA Tour win.  Like the CBS hit show “Survivor” — Hatton outwitted, outlasted and outplayed a great cast of challengers, including world’s No. 1 Rory McIlroy.  Here’s how the bloody aftermath added up on a week that took its toll:

Paul Azinger needs to shut up about what he calls “that European Tour.”  Hatton did what countryman Tommy Fleetwood couldn’t do last  week.  He survived incredible pressure, near-impossible conditions and won with the highest score of the season — four-under par.

Tyrrell Hatton makes Jon Rahm look extremely calm.  Hatton spent more than his share of time slamming clubs into the ground, lambasting himself and looking like he was on the verge of exploding, as he’s been known to do now and then on the European tour.

Hatton hit some really clutch shots down the stretch when others couldn’t.  After failing to birdie the only easy hole on the course, the short,  downwind par five 16th, Hatton hit a gem of a five-iron into the tough 17th for an easy two-putt par then laced a perfect drive at the 18th, the hardest hole on the course, then followed it up with a super approach into the tough green, inside 25 feet for an easy two-putt for victory.

Hatton thought he blew it when he hit his tee ball into the water left at the par four 11th.  “I thought I shot myself out of it at 11,” Hatton said after a mentally and physically taxing day.  He was nearly speechless at the end.  “”It’s hard to explain,” he said.  “Such an incredible feeling.  Such a tough day.  To hold on and win here — such an iconic venue.”

Sungjae Im was in the thick of it a week after his win under tough conditions at the Honda.  Im was tied for the lead when he hit a shocking approach to the short par four 13th from just 110 yards that came up short and in the drink.  He made double there, added another bogey at the 15th and finished two-under, good for solo third.

Marc Leishman had every opportunity to win at Bay Hill for the second time.  He’ll look back at the third hole where he watered his tee shot and made double as the swing that hurt him most.  His 73 was a shot better than Hatton’s closing 74 but at three-under, he was a single shot short.   It was basically a match play scenario down the stretch between Leishman and Hatton.

Rory McIlroy looked like the man to beat going into the final 18 holes.  A birdie at the fifth hole tied him for the lead but sloppy double-bogeys at the sixth and ninth holes squashed any hopes and added up to a front nine 40.  Sure, Rory got another top five.  But at this point, it almost becomes a case of “who cares?”  It’s obvious that if you’re a fan of Rory McIlroy and you’re looking for him to win, he’s going to let you down.

Four:  That’s the number of players who finished under par — Hatton, Leishman, Im and on the very last hole — Bryson DeChambeau.  DeChambeau pulled off what was a miracle birdie at the 18th.  From the deep rough on the right side of the hole, he pounded his second from 177 yards and it barely cleared the rocks but landed softly on the front of the green, 13 feet below the hole.  He hit a perfect putt that was dead-center cut.  Birdie for 71 and one-under and solo fourth.

England’s Matt Fitzpatrick was the only player to break 70 over the weekend.  He shot 69 on Sunday thanks to a 32 on the front nine.  He moved up 27 spots to finish in a tie for ninth.  Hey Azinger — leave the Euros alone.

David Feherty had the best line about Hatton:  “He’s nice to everyone but himself.”

Sam Saunders, grandson of Arnold Palmer, managed to make the 36-hole cut but eventually finished in a tie for 62nd.

Rob Oppenheimer had a weekend to forget.  After making the cut, he shot 83-83 over the final 36 holes and finished dead-last.

And finally:  NBC talking heads must have used the term “major conditions” a dozen times.  The toughest major last season, the PGA, was won with an eight-under par score.  The other three were won with double-digits under par.  None of the majors had conditions this difficult and same on NBC for not pointing that out.