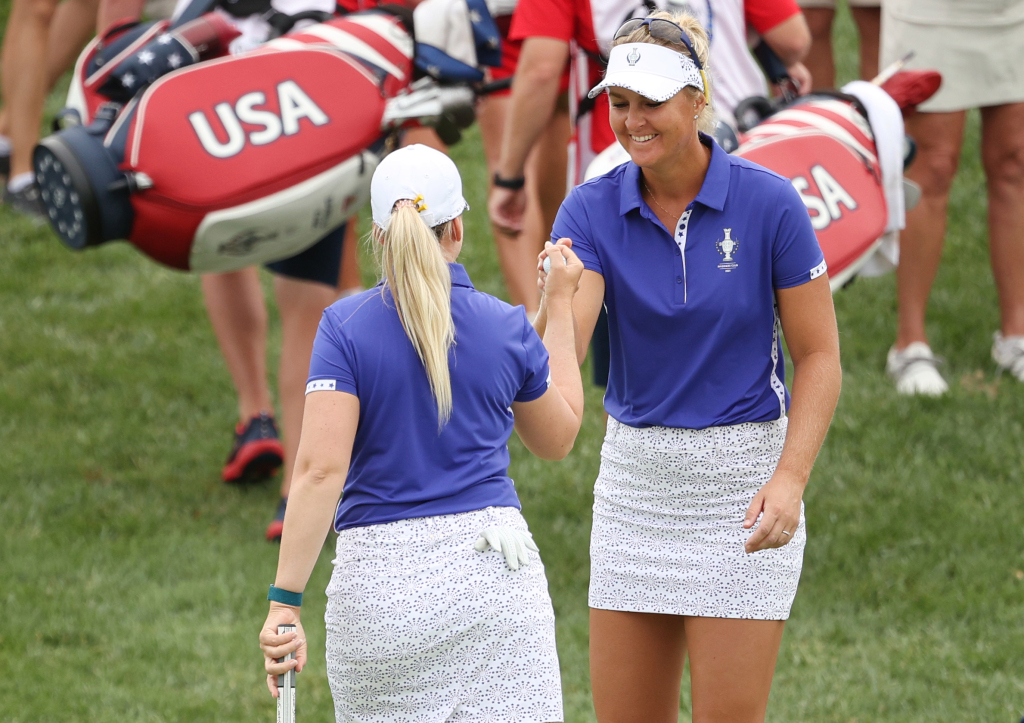 Anna Nordqvist and Matilda Castren have won two of their three matches for Europe.

Posted By: Tom Edringtonon: September 05, 2021In: In Other News...No Comments

After two pressure-packed days with eight Fourball (best-ball) sessions and eight Foursome (alternate-shot) sessions, the European Solheim Cup team has put its best foot forward and holds a 9-7 lead over the United States heading into Monday’s singles matches at the iconic Inverness Club in Toledo.

After trailing 5 1/2 to 2 1/2 after the Saturday sessions, the U.S. fought back and won three of the four Sunday morning alternate-shot matches, cutting the European lead to 6 1/2 to 5 1/2.  But in the afternoon best-ball battles, Europe won two matches, halved a third and limited the U.S. to one win.  The Europeans will take a 9-7 advantage into the singles session where 12 points are up for grabs.

Europe only needs five points to retain the cup as a tie results in the cup staying with the last team to win it — Europe in this case.

“They came out firing this morning. They were obviously very pumped up from that,” observed Mel Reid, one of the standouts for the European side.  “The crowd were getting behind them, heckling us a little bit.  Whatever, some of it was funny, some of it wasn’t.  Whenever they came up with more original stuff.  But obviously to go in with a two-point lead is huge.  Getting that halve was huge.”

Best performer for the European team has been Ireland’s Leona Macguire.  A rookie in these matches, she’s 3-0-1 and is the only player on either team to go in all five sessions.

“That’s what the captain wanted me to do, so I’m here to win every single point I can for the team,” Maguire said. “One more day to try and do that again tomorrow.”

Europe will be trying to win on American soil for only the second time in the 31-year history of this event.

It may be a first in the history of golf — twin brothers have won back-to-back events on the European Tour as Nicolai Hojgaard birdied the 72nd hole Sunday to win the Italian Open.

Two weeks ago, it was his twin, Rasmus, taking his third victory at the European Masters.

The 20-year-old Danish twins are the first brothers to win back to back events on the European Tour  and perhaps the first time twins have won back-to-back on any major tour.

Nicolai arrived at the 18th tee at the Marco Simone Golf Club (site of first-ever Ryder Cup in Italy) knowing he needed a closing birdie to win, and he did it – holing from three feet to finish the tournament on 13-under par and that first important win.  He closed with an even-par round of 71 but it was good enough to get the job done.

His brother embraced him afterward on the 18th green.

“It means a lot. I’ve been grinding for a long time and seeing Rasmus win three times made me want to do it even more,” Nicolai said.  “And to finally get it done is very special and it’s been a great week here so I’m just very happy to get it done.  It’s hard actually to make birdies when you’re in front but you just have to grind.  Everyone’s going to struggle at some point. You’ve just got to keep grinding – that’s what my caddie Christian told me.  That’s what we talked about all day – keep going, we know the birdies will come. There weren’t many birdies but one came at the last and it was very important so I’m really pleased for that.”

Adrian Meronk and Tommy Fleetwood finished in a share of second place on 12 under just one shot behind Højgaard.