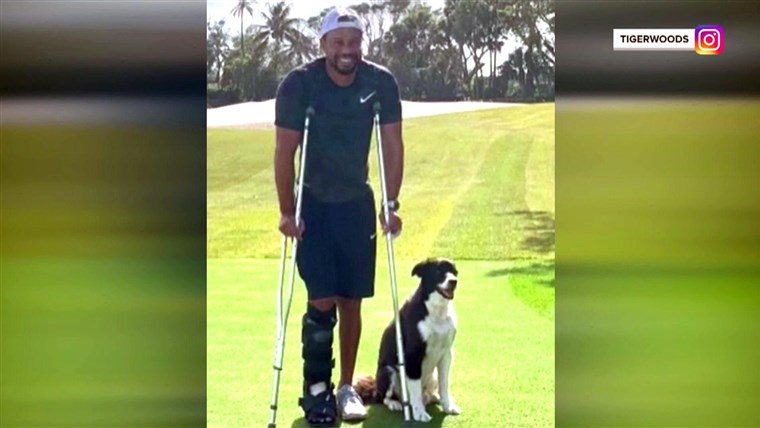 Tiger Woods on the mend with the faithful "Buggs" at his side.

There’s no sense in going through the motions with this new cockamamie “Player Impact Program” that has been devised by The Sheriff Of Nottingham (aka Tour commish Jay Monahan) and His Band Of Henchmen (aka Yes-Men).

No sense in going through some algorithm that perhaps only Bryson DeChambeau can unravel, this is no contest if the Tour really and truly wants to reward someone for “driving the needle” as The Sheriff put it.

As it was in the beginning and always has been since the day he turned pro and put his name on his bag, Tiger Woods has been That Guy.  He’s been and still is That Guy that brings eyeballs from outside the golf world.

El Tigre finally gave the world a glimpse into his recovery last week as he stood near the re-construction work of his spectacular short-game practice area on the grounds of his palatial Jupiter Island estate.  Tigh’s got 2.5 million followers of his Instagram account.  Let’s repeat that for The Sheriff and his Yes-Men — Two-million, five-hundred thousand followers.

For the record and they can go ahead and throw this into the Player Impact Logarithm — Tiger’s picture of him and Buggs drew 727,123 likes as of this past weekend.

Seriously?  Can they even pretend that anyone BUT Tiger Woods is the No. 1 “Impact Guy” for the PGA Tour?

So let’s not waste a year on this, go ahead and cut the $8 million check to Tiger, you know, first place money for the Player Impact deal and let everyone else who has any sort of interest battle it out for second place.

In fact, while we’re at it, they should probably just give the entire $40 million to Tiger.  Why?  Without Tiger Woods, the PGA Tour’s television contracts would look like someone stole all the money.  Take a look at a PGA Tour promo — how many times do you see a Tiger Woods fist pump?  How many times did they show Tiger’s famous “Better Than Most” putt on 17 at the Players Championship?

Without Tiger, The Sheriff might actually have to send his Henchmen out to loot and steal.

Those old enough to remember may recall Arnold Palmer’s impact on the game.  Arnold basically MADE golf on television.  Arnold was the guy, he was the original “Impact Player.”  Social media?  Ha!  Arnold was social before there was media.  They should send second place money for this Player Impact Program to his estate or simply donate it to the Palmer Hospital in Orlando.

Anyway, back to Tiger.  He’s drawn headlines on and off the course, his life has been a hot mess at times, unlike Jack Nicklaus who was basically a boring family guy who liked the win a lot of major championships.  In his early days, Jack wasn’t popular at all.  He was simply the fat kid winning golf tournaments that belonged to Arnold and that didn’t sit well with Arnie’s Army.

Which brings us back to Tiger the trailblazer.

Tiger’s been the talk of the town since the day it was “Hello World, I guess……”

Tiger made the world his playground when it comes to golf.  He was also Michael Jordanesque in the way he stole headlines.

We’d like to say that Tiger invented the huge fist-pump and he invented the putt walk-in or should we say run-in when he went after that one and pointed at it before it buried in the hole during the playoff with Bob May at the 2000 PGA, which, of course, Tiger won.

Tiger has basically put the “P” in phenomenon, both on and off the course.

Tiger Woods IS the best-ever, greatest-ever “Impact Player” on the PGA Tour.

Tiger doesn’t just drive the needle — Tiger IS the needle!

So why on this green earth does the PGA Tour need to try and figure out who wins this Impact Player Program?

It’s already been won about 10 times over.