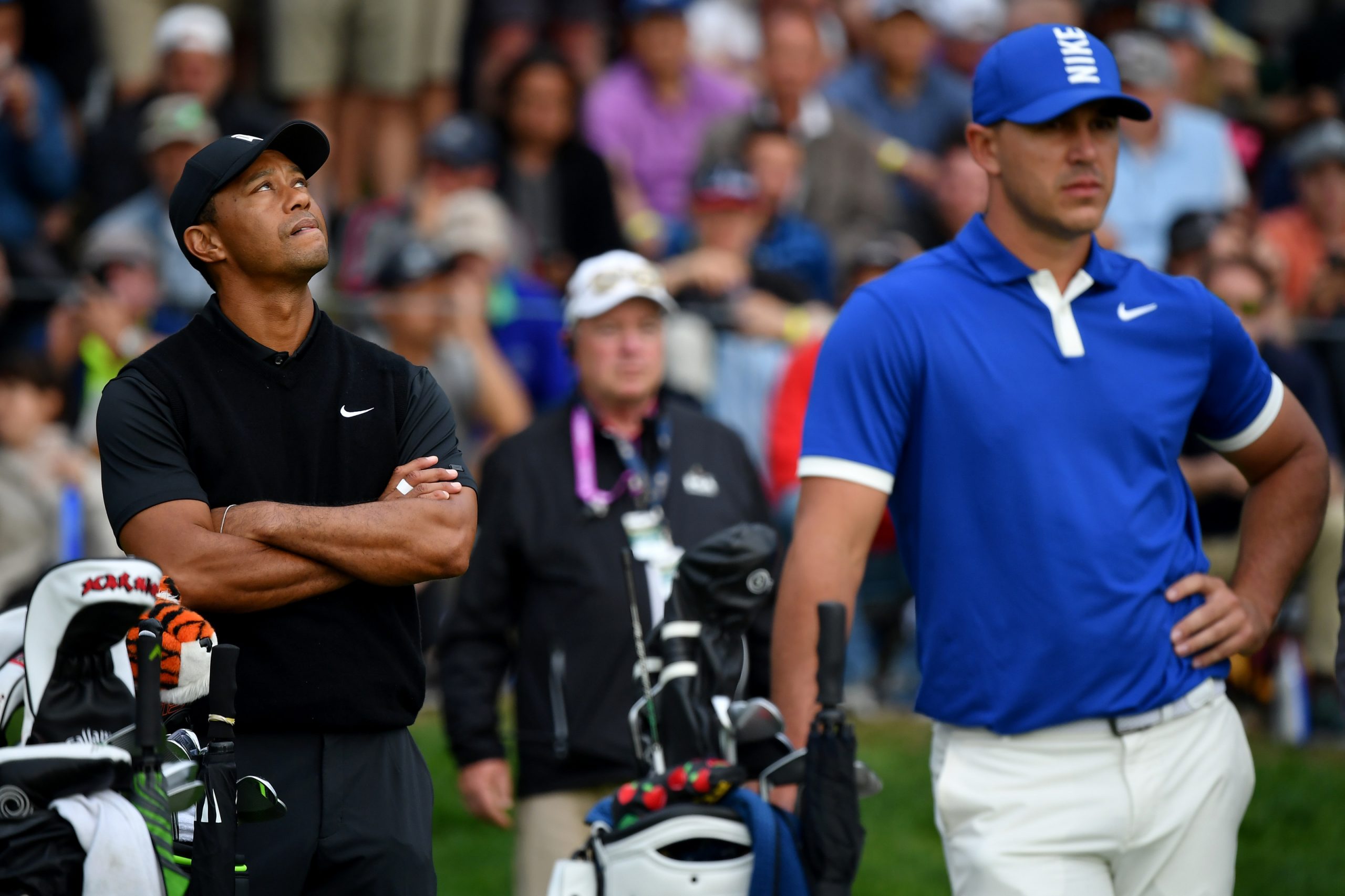 Tiger thinking to himself: "This guy standing with me is totally delusional."

Somewhere out there on swanky Jupiter Island, deep within his Fortress Of Solitude, Tiger Woods is learning to walk again.  When you’re in the midst of a long rehab — there’s nothing like a little humor to lighten the load and it sounds like Brooks Koepka is becoming one helluva standup (or sit-down by the pool) comedian.

The phones lines have been burning and on the other end, come the inquiries:  “Did you hear what Brooks said?”

Our answer is “Oh heck yes” and on top of that, we’re getting a good laugh, as Tiger Woods most likely is as well.

While everyone’s wondering if Mr. Injured Reserve (aka Brooks Koepka) is going to be recovered in time from his limp wrist to tee it up in the Ryder Cup matches next week, the good folks at Golf Digest decided it was time to unveil their “Poolside Chat With Brooksie” as we call it.

Brooks touched on a number of subjects, including his obvious aversion to team situations (sorry Captain Stricksie). Oh yes and thank goodness he brought up Tiger Woods.  Things have been quiet with Tiger learning to walk again but Brooks, probably after his fifth or sixth Michelob Light came up with this gem of an observation/prediction about his future performance in major championships and a surprising declaration:

“In my mind, I’m going to catch him (Tiger) on majors. I believe that. I don’t see any reason that can stop me.  I’m 31. I have another 14 years left.  If I win one a year, I got Jack (Nicklaus and his 18 majors).  People misconstrue that as being cocky. No, that’s just my belief.  If I don’t have that belief, I shouldn’t be out there.  If you don’t think you can win, why the hell are you teeing it up?”

Now first we want to give the devil, er Brooksie, his due here.  The dude’s got four majors (17-18 U.S. Open; 18-19 PGA).  Notice no majors in ’20 or ’21.  So he might want to rethink that “If I win one a year,” bull crap.  Might want to check with Tiger and see if he was up to winning “one a year.”  What really catapulted Tiger was his four-in-a-row “Tiger Slam” and without that, things would look a bit more ordinary and a lot of people might be willing to bet some significant dollars that Brooks won’t win four straight majors at any point in the future.  Fact is, the competition these days is getting tougher by the year and will continue that way.

Then there’s the fragile Brooks Body.  During his NFL days, quarterback Chris Chandler was known as “Crystal Chandelier.”  He looked downright rugged compared to Koepka who has mastered the knee, hip and wrist injuries.  The way things have gone for him the past few years, he might have been more believable had he said he’s going to match Tiger in the significant injuries department.

And now for the Ryder Cup.  It’s not like Brooks has been Mr. Team Guy in his two outings.  Got in a Bru-Ha-Ha with his former buddy, Dustin Johnson, after the Foley In France, where the two (allegedly) nearly came to blows.  Brooksie went 1-2-1 in France so he comes to Whistling Straits off a miserable showing last go-round.  He was much better in ’16 at Hazeltine where he went 3-1 making his Ryder Cup record a nothing-to-brag-about — 4-3-1.

Well, if Brooks was indeed lubricated with his favorite adult beverage out by the pool with the Golf Digest guy, maybe Captain Stricksie can overlook Brooksie’s thoughts on having to be a “team guy” for one week every two years.  Not asking a lot, is it?

Yet Brooks delivered this:

“It’s tough.  There are times where I’m like, I won my match.  I did my job.  What do you want from me?  I know how to take responsibility for the shots I hit every week.  Now, somebody else hit a bad shot and left me in a bad spot, and I know this hole is a loss.  That’s new, and you have to change the way you think about things.  You go from an individual sport all the time to a team sport one week a year.  It’s so far from my normal routine.  I can barely see my team (aka inner circle of ‘Yes Men’).  It’s hard to even go to the gym.  At the Presidents Cup in New York, we had to go to the gym at 5 a.m. to get it in. We went to the Equinox, and it was me, Dustin and Tiger, and we come back and go to a team meeting.  Under regular conditions, I take naps a lot.  I might take an hour, hour-and-a-half nap, or just chill on the couch and watch “SportsCenter,” before rounds, after rounds, whatever. There’s no time to do that at the Ryder Cup. There’s no time to decompress.”

Now that in and of itself is pretty darn laughable.  Talk about ego-centric!  Brooksie used “I” about seven times in that self-centered blathering.  Heaven forbid he has to miss his nap.  Hey Coach Stricksie — a nap room off the main team room area for Koepka, please!

So we’re now about T-minus a week or so until it’s ball-in-the-air at Whistling Straits and Coach Stricksie and his Vice Captains have most likely seen the Brooksie Babblings, as has everyone else in the golf world judging by reactions out there.

So maybe we need to remind everyone of something Koepka once said and it makes you ask even more questions about this surly loner who has 18 majors in his sights.

Pay attention to this quote from Koepka that he once spewed out:

“If I could do it over again,  I’d play baseball—100 percent, no doubt.  To be honest, I’m not a big golf nerd — golf is kind of boring, not much action.  I come from a baseball family, and it’s in my blood.”

And as for Brooks’ attitude toward the Ryder Cup, former USA Captain Paul Azinger put it best after digesting Brooks’ Golf Digest quotes:

“I’m not sure he loves the Ryder Cup that much, if he doesn’t love it, he should relinquish his spot and get people there who do love it.  Not everybody embraces it. But if you don’t love it, and you’re not sold out, then I think Brooks — especially being hurt — should consider whether or not he really wants to be there. And if you add the Bryson dynamic to that, that would be an even easier decision for him.”

Finally, yes, Stricker and everyone else will be dealing with Koepka and his dubious feelings for the Ryder Cup.  Koepka sent this message this week:

“I’ll be there. I’m good to go,” Koepka said. “I’m feeling good. Been doing my rehab, doing everything I need to do to be ready for the Cup. I’ll be there ready to play.”