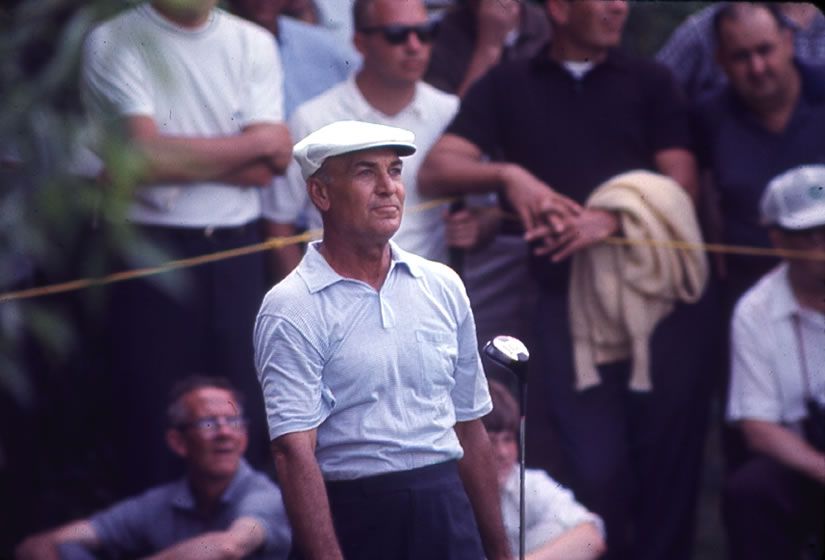 Ben Hogan had a great definition about what makes for winning in golf.

Posted By: Tom Edringtonon: September 16, 2021In: The Lesson TeeNo Comments

Anyone can play well when they’re hitting good shots.  Only problem is — how many really good shots do you hit in every round?

Ben Hogan once said he only liked about four or five shots per round.  In Hogan’s case, those were what he deemed perfect shots and Hogan had really high standards.  What everyone might consider a good shot, was probably considered mediocre by Hogan.

The quote that leads this off bears quite true today no matter what level golfer you are.  Fact is golf is a game of where your misses go — how bad is your bad shot?

A “bad shot” with an iron for Hogan might settle 25 feet from the hole.

A bad shot for most amateurs misses the green entirely and can end up in all sorts of predicaments.

Which brings us to managing those “misses.”

We’ve seen too many players (amateurs) over the years pull a club on a par three that will only find the green if the player hits it really good.  Only problem is that unless you’re a skilled, low-handicap player, you might not exactly flush that club.

It’s important to learn to “manage” your misses.  If you don’t hit the club dead-square-flush, where do you want to leave yourself for your next shot.  It requires a little pre-shot planning.  Where’s the trouble?  Long or short?  If the front short of the green is wide open and leaves you with a good spot to chip from, you want to make sure your “miss” is short.  Just the opposite if there’s plenty of open space behind the green.

If you watch Tour events, you’ll see players get in trouble when they “short-side” themselves — they hit into a bunker right of the green and the pin is cut tight-right.  That cost Dicky Pride in his playoff with David Toms last week on the Champions Tour.  Pride short-sided himself and best he could do was get his ball 20 feet from the hole.  He missed that par putt and Toms two-putted for an easy playoff win.

So keep in mind:   Don’t “short-side” yourself;  Understand where the trouble is around a green;  If there’s plenty of room short of the green, use a club where your miss will end up just short.

It’s part of overall management but it will save you a lot of strokes — as Hogan said:  “He who misses best, wins.”