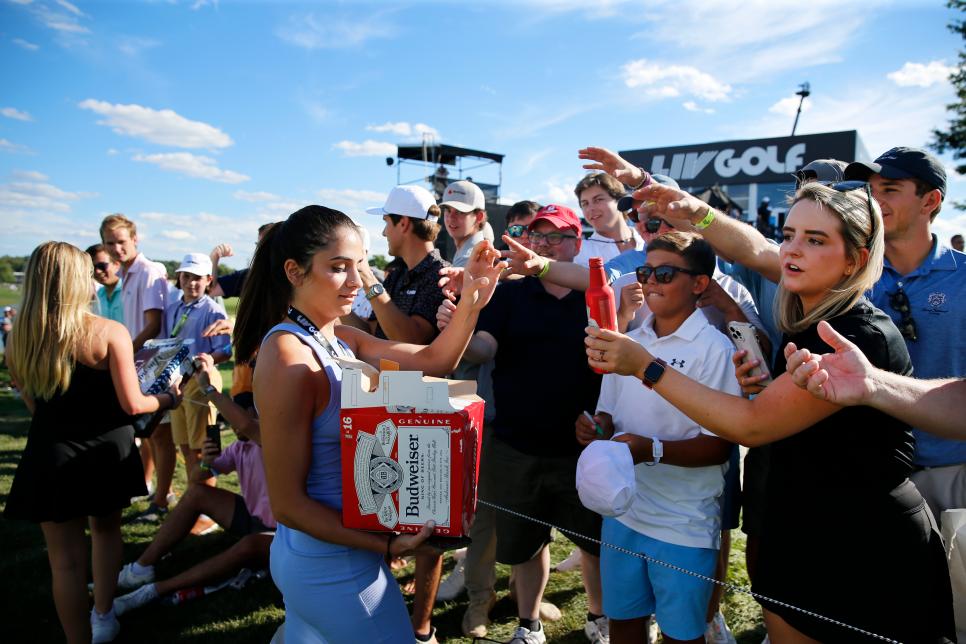 Free beer at the LIV -- at least it will attract the power drinkers.

The closer you look at this Greg Norman-inspired, Saudi-dirty-money funded exhibition/circus that is the LIV, the more  you see the desperation.

Norman and his Saudi pals found themselves rubbing elbows with The Donald this weekend at Trump’s Bedminster hideaway and that’s where this thing started to deteriorate.  With AC/DC music blaring (yeah, who doesn’t like that?), the proceedings eventually broke out in a Donald Trump political rally.  Get you MAGA hats in the pro shop — only 35 bucks each, yeah, that’s the ticket.  If anything should be a buy-one, get-one-free, well, save your 35 bucks.

Under the glare of New York/New Jersey media members, some of the truth, the reality of this show begins to leak out — this is pretty much an exhibition atmosphere — attendance is so sparse you can converse with your favorite aging stars on the tee box as they wait for the green to clear on par threes.  No concentration level needed, everyone’s getting paid regardless of how bad they play and that’s a good thing for 50-something Phil Mickelson, who’s averaged around 75 shots a round — a good solid three-handicapper!

Phil, who used to be a darling in this region of the country, actually got heckled.  On day one at the par three 16th, good old Lefty was preparing to hit his tee shot when someone yelled:  “Do It For The Saudi Royal Family!!!”  Well, their slogan is “Golf, Only Louder” and apparently said heckler was too loud for the proceedings and was threatened with ejection from the place by Saudi-paid security on site.  Just remember, no free speech in The Kingdom.

Phil then politely parked his tee shot in a green-side bunker then sent his next shot over the green, into the water on the other side of the hole.  He did manage to make a miracle bogey.  On day one Lefty finished four-over, tied for 43rd in a 48-man field.  Now you know why he signed up for a fat payday — no practice, no good performance necessary, yes, there’s crappy golf but free beer!  As Greg says, it’s good for the game.

No wonder they didn’t sign Charles Barkley to comment on this stuff, “Crappy Golf” would have become his call sign and eventually, it would have made it’s way to the Crown Prince and good old Chuck might have been in deep doo-doo.

Truth be known, the majority of these 48-man fields fail to shoot even par for their 54-hole shotgun starts and that was the case again this go-round as 30 of the 48 couldn’t reach even par.

Yes, as Chuck would say, it’s really crappy golf but hey — they’ve got AC/DC blaring through giant speakers!  Wow, that’s something to write home about.

This week’s winner was none other than disgraced former European Ryder Cup captain Henrik Stenson, who hasn’t been competitive on the world stage in several years.  He found happiness in the land of the over-40 retirement funding with a victory.  He shot 11-under par, two better than Matt Wolff, who fled the PGA Tour with his fragile mental state and Dustin Johnson, who hadn’t won on the PGA Tour since the 2020 November Masters and is now zero-for-three against a bunch of guys who simply aren’t as good as he used to be.

Bring on the free beer.

American Sean Crocker came through in the clutch Sunday and held off Eddie Pepperell to win the Hero Open at St. Andrews Fairmont.

It was Crocker’s first victory on the DP World tour.

Crocker started the final round with a two-shot lead and saw it cut to one at the turn.  He then birdied three of the first four holes to start his inward nine — got to 22-under par then ground out six straight pars to edge Pepperell, who was in the clubhouse at 21-under.  His final round 68 got the job done.

Crocker, who started the 2022 season with eight missed cuts and a WD in his first nine events, holed a nervous four-footer at the 72nd hole for the win.

“Winning a golf tournament is not easy. And Eddie did not make that easy for me either,” Crocker said after hoisting the trophy.  “After the three-putt par on the 15th I kind of thought I still had a little bit of room but they’re not easy holes coming down that stretch.  It was a great save on the 17th, and then I thought I could make it pretty easy – it’s a par five coming in – but I don’t think it’s ever easy to make a par to win a golf tournament. That was pretty special.

“I was nervous. I’ve felt pressure like that before but it’s my first pro tournament (win). That putt looked like it was 20 feet, that hole looked like it was half-an-inch wide,” said Crocker, describing his final putt.  “Right off the face I knew it was a well-struck putt and as I looked up and I saw it drop I was telling myself ‘don’t start crying’.  It’s awesome. It just shows you that you just don’t know what this game is going to bring you.

“We go out there every day trying our hardest and we can play terrible for a long time and then all of a sudden you have a week like this where every bounce seemed to go my way, putts dropped, I hit the ball beautifully and it just makes me appreciate this game I play and what I get to do for a living.  I hope I keep putting myself in this position. That door has been locked shut for me for almost five years. To go wire to wire I think I knocked the door clean off its hinges, which is nice.”

Rookie Ayaka Furue from Japan blew away the field Sunday at the Women’s Scottish Open with a course-record 10-under par 62 on Sunday at the Dumbarnie Links.

She started the final round four shots back of 54-hole co-leaders Celine Boutier and Lydia Ko at 11-under par.  She made six straight birdies starting at the sixth hole to tie for the lead with Boutier.

Boutier bogeyed the 13th and Furue birdied the 15th to jump into the lead.  The 22-year-old from Japan was 19-under with three to play. All she did was finish birdie-birdie and posted 21-under with that 62.  Boutier couldn’t catch her and Furue had her first win.

“I was four shots back. I thought it would be difficult to catch the top, good players,” Furue said afterward.  “But I’m very happy I played good golf and I was able to come out as a winner,”

She hit 13 of 14 fairways and 17 of 18 greens on her way to the new course record.  “I had the right mindset. I thought I had to go low, and I played very well. I hit good shots. All around my game was good, and the birdie putts I wanted to make and had to make, I was able to make.”

Furue’s 62 marks her lowest recorded score on the LPGA Tour and her four-day total of 267 is her new career-best for 72 holes. Her total of -21 is the new tournament scoring record in relation to par and with the win.”

Boutier was disappointed with the loss. She made four bogeys and seven birdies in the final round, but just wasn’t able to keep up with Furue’s momentum.

“I started making some bogeys and I feel like it’s not easy, playing in the final group. Then obviously when someone just has their day, you just can’t do anything about it really,” said Boutier who hit nine of 14 fairways and 15 of 18 greens. “It was a little bit windy, a little bit of preparation for next week, and I think that’s the main thing is I don’t think I could have expected a better week than how I played.”