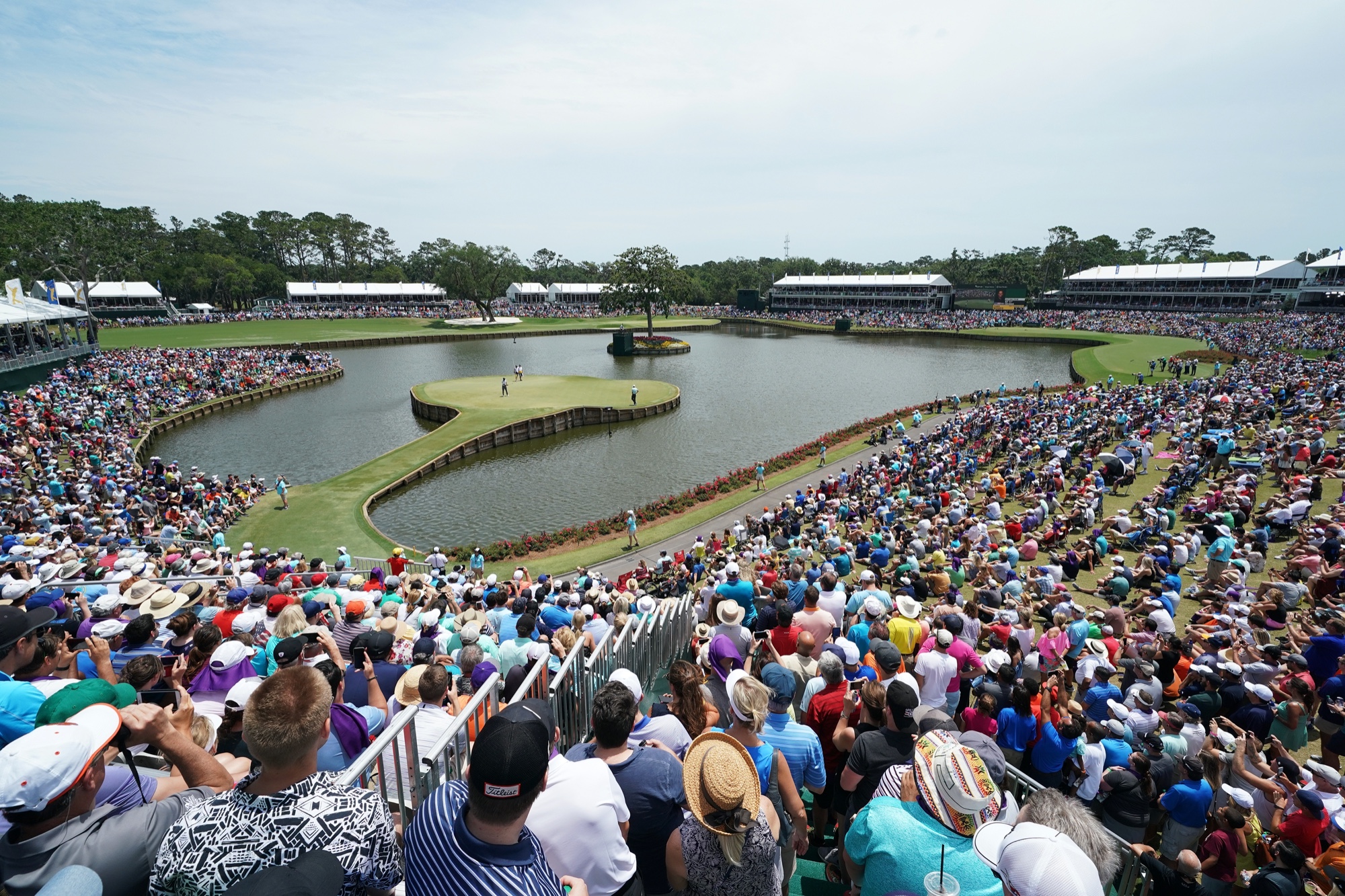 The iconic 17th at The Stadium Course is the star of the show this week.

The Players, The PGA Tour And Its Obvious “Major Envy”

No doubt it took the Sheriff Of Nottingham (aka PGA Tour commish Jay Monahan) and his Sinister Band Of Henchmen a while to get over the fact that one Eldrick T. Woods would not be participating in their big shin-dig this week up there at Ponte Vedre.

The Players is the PGA Tour’s answer to the four majors.  It’s been obvious over the years that the tour suffers from a case of “major envy” mostly due to the that the tour has nothing to do with The Masters, The PGA, the U.S. Open and the Open Championship.  The Masters belongs to that exclusive band of green-jacket wearing shakers-and-movers that comprise the sanctity that is the Augusta National membership.  The PGA, of course, belongs to the PGA of America, the association that oversees the hard-working club professional who actually work for a living.

The U.S. Open is the child of the USGA, another wealthy organization with an investment fund of some odd $500 to $600 million, depending on the state of the markets, which means that the value today may be closer to $400 million.

The Royal and Ancient along with the European Tour owns and handles The Open Championship.

Which leaves the tour with no hand and no part of any major.

Thus was the genesis of The Players.  The tour has “encouraged” the media over the years to refer to it as “The Fifth Major” but we all know better.  Only the LPGA and Old Guys Tour are nuts enough to have five majors and those “Fifth Majors” were basically purchased with cold, hard cash.

Anyway, back to the major-less PGA Tour.

The Sheriff and his Henchmen consoled themselves this week by announcing that the tour has reached a new television/streaming/broadcast agreement that will run nine years, picking up in 2022 when the current deal expires.  Of course the tour rounded up the usual suspects — NBC and its kid-brother, The Golf Channel along with CBS, and the pay-for-view ESPN-plus.

The Sheriff was happy to put it in his own words, prepared for public consumption by one of the PR Henchmen:

“We’re excited to announce that we have entered into new agreements with our existing partners Viacom/CBS and Comcast/NBC Sports Group, while establishing a new long-term relationship with Disney and ESPN+.”

Naturally the tour did not disclose “the financial terms” of its extension.  Seriously, it would look extremely bad for a “Not-For-Profit” like the tour to reveal that it will bring billions more into its already obese coffers.  Yeah, “Not-For-Profit.”  Perhaps the networks should have brought that up during the negotiations.  What the new deal does is take the tour past the playing-life expectancy of the previously-mentioned Eldrick T. Woods.

So the tour will put on its Sunday best for the entire week.  It will be interesting to see how the Stadium Course is set up.

Obviously those who have played the past two weeks at PGA National and Bay Hill may be a bit shell-shocked from the difficulty that saw Sungjae Im win at the Honda at six-under par and then Tyrrell Hatton earning Arnie’s red sweater with a stunning four-under total.

The last thing the Sheriff wants is all his charges taking a beating again this week.

Should play a lot easier than the past two weeks.  Rory McIlroy won last year at 16-under par.

So yes, stay tuned as we approach the world’s unofficial  “Fifth Major.”

The top 10 in the world are in the house.

But without you-know-who, you got a very fancy ice cream sundae without the cherry on top.