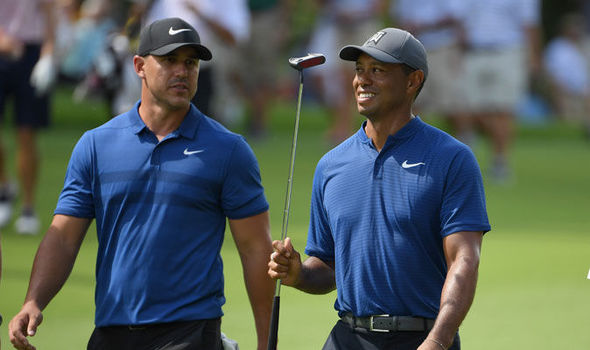 Brooks Koepka defends the CJ Cup this week while Tiger Woods gets ready for the Zozo.

Brooks Koepka is back this week after a “he fell flat on his face” performance in Las Vegas.

Tiger Woods will be back next week after taking some much deserved time off.

Both will be on the other side of the world to grab some easy money in the Big Fat Asian Money Grab.

The Big Fat Asian Money Grab (aka BFAMG) will start off the coast of South Korea at Jeju Island, home of the Nine Bridges Resort.  This official PGA Tour event has Koepka as its defending champion and typically that’s all you need to attract a lot of attention over there.

Brooks won’t have to worry about missing the cut, there isn’t one.  Select field, no sponsor’s exemption for Koepka’s unaccomplished younger brother Chase.

Justin Thomas will be there, Tommy Fleetwood and a bunch of better names than we’ve seen the past few weeks in the ho-hum yawner of a cross-over season.

What we have the next two weeks on the other side of the International Dateline are two hefty money purses.  The CJ Cup has $9,750,000 for the taking, ditto for the Zozo, a first-time event in Japan that the PGA Tour is pushing the heck out of.

Koepka simply wasn’t into it in Vegas.  He shot one-under and missed the cut by a whopping four shots.  He’s also coming off stem-cell therapy for a partial patella tendon tear.  So you wonder what he’ll have for us on Jeju Island?

Meanwhile, El Tigre announced this week that he will co-author his own story, a book to be released titled  “Back.”

Back  will be published across all HarperCollins global locations and is being billed as “a candid and intimate narrative of an outsized American life.”

Steve Williams has produced a book on his former boss, Hank Haney told us stuff about his former student.

Now Tiger says it’s his turn, but will one of golf’s most secretive guys give us anything that will raise our eyebrows?

“I’ve been in the spotlight for a long time, and because of that, there have been books and articles and TV shows about me, most filled with errors, speculative and wrong,” Woods said in a statement. “This book is my definitive story. It’s in my words and expresses my thoughts. It describes how I feel and what’s happened in my life. I’ve been working at it steadily, and I’m looking forward to continuing the process and creating a book that people will want to read.”

Okay, so Back  is on its way, and Tiger has flown Air Eldrick  to the Far East.

He’ll play in a rinky-dink skins game in Japan to get warmed up for the Zozo.  Hideki Matsuyama, Jason Day and Rory McIlroy will be fighting for what amounts to about $375,000.  Given Tiger and Rory’s financial statements, it’s surprising they’d get out of bed for that kind of money.  But it all boils down to international sponsors.  The companies Tiger and Rory front for are obviously selling their stuff in Japan.

Sure beats what we’ve been watching the past few weeks.