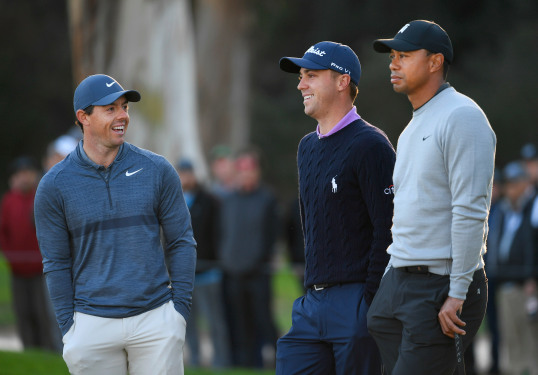 Leave to the old warhorse — Tiger Woods — to show the world’s No. 1 and No. 3 how to get it around to start the quest for a PGA Championship.

You can bet that Woods was up by 4 a.m. Thursday — it takes time to prep a 44-year-old, surgically repaired body when the morning temperatures are in the low 50s.

Mark Twain once said — “The coldest winter I ever spent was a summer in San Francisco.”  To that, it was chilly when Woods arrived at Harding Park to get ready for his first round.  He was in fast company — Justin Thomas, the new world No. 1 and former No. 1 Rory McIlroy, now third in the rankings behind Thomas and Jon Rahm.

Woods had a nice range session, he was peeling off drives, hitting some low, some high.  Accuracy is a must.  The rough at Harding Park is longer than Tommy Fleetwood’s hair.

“This course is all about hitting fairways,” Woods said after a nice morning’s work that saw him shoot 68, two-under for his first round.  “It was positive,” Woods said of his effort.  We had more favorable conditions for the morning round.”  Indeed they were, greens were more receptive and there was virtually no wind.  By the afternoon, it was picking up and expected to get to 15 miles per hour at times.

Woods also had a good day with his new putter.  It’s not really new, it has served as his backup.  “I’ve been messing around with it for a year,” Woods pointed out.  It has a longer shaft, which takes some pressure of Tiger’s fragile back.

He got off to a great start.  After birdies at 10 and 13, he was two-under for his first four holes.  He missed the 14th fairway left, into that juicy rough and it would lead to bogey.  His miss most of the day was left and conceded:  “Toe balls, toe balls go left.”  Tiger reeled off a string of pars then made a great save at the 18th when he once again tangled with the rough on the left side of the hole but made a 20-footer for par to make the turn in one-under.

It was more of the same over his final nine — skillful scrambling and masterful putting.  By day’s end, he posted 68.  He cut Thomas by three.  After turning one-under, Thomas made a mess of two of the easier holes on the front nine.  He made double from the front right greenside bunker at the par three third then another at the 340-yard seventh where a poor tee shot got him in trouble and he’d end up with six on a hole where most were making birdies.

As for McIlroy, he got off to a horrible start with three straight bogeys starting at the 12th.  He dug deep and came up with three birdies to get back to even and that’s where he’d end up after an uneventful front nine.

While Woods was encouraged with his play, he was cautious.  “We’ve got a long way to go.  The course will only get more difficult.”

Bryson DeChambeau had a major equipment problem on the fourth hole Thursday.

DeChambeau had just hit his drive on the par four seventh and went to pick up his tee.  He leaned a bit on his driver and the shaft snapped at the hosel.

Because the club wasn’t broken purposely or as a result of anger, DeChambeau was allowed to replace it.  He sent a member of his team to retrieve the backup shaft and placed it back into the driver head.  He fared quite well with the new shaft, which was identical to the one that snapped.  By day’s end he finished with 68 and was in position to go out and take advantage of calmer conditions predicted for Friday morning.

With no crowds, it’s a lot easier for microphones to pick up some tee box talk, if you will.

Tiger Woods and Rory McIlroy had a chat about the COVID-19 situation as other sports attempt to return:

“Once one person has it in in (an NFL)  locker room, they’re all going to get it,” said Woods.

“For now. If they have one more outbreak, they’re done,” Woods responded.

Jeff Hart is one of the PGA professionals in the field.  This year the PGA Of America used a points system to determine the 20 members who would gain a spot in the tournament and Hart was one of them.

So what were his chances at Harding Park?  Give the guy credit for breaking 80.  He got off to a great start — was one-under through the first five holes on the front side, even through seven, finished with a pair of bogeys for 37.  On the back, five bogeys for 40.  But he can make a claim that he did something the No. 1 player in the world (Justin Thomas) couldn’t do.  Hart played all 18 holes without a double-bogey.

Adam Scott Plays With Bryson, Has Best Line Of The Day:

Adam Scott finally returned to the golf scene and was paired with Bryson DeChambeau on day one.  Both shot 68s.

Scott, when asked about Bryson’s enormous distance of the tee gave us this gem: