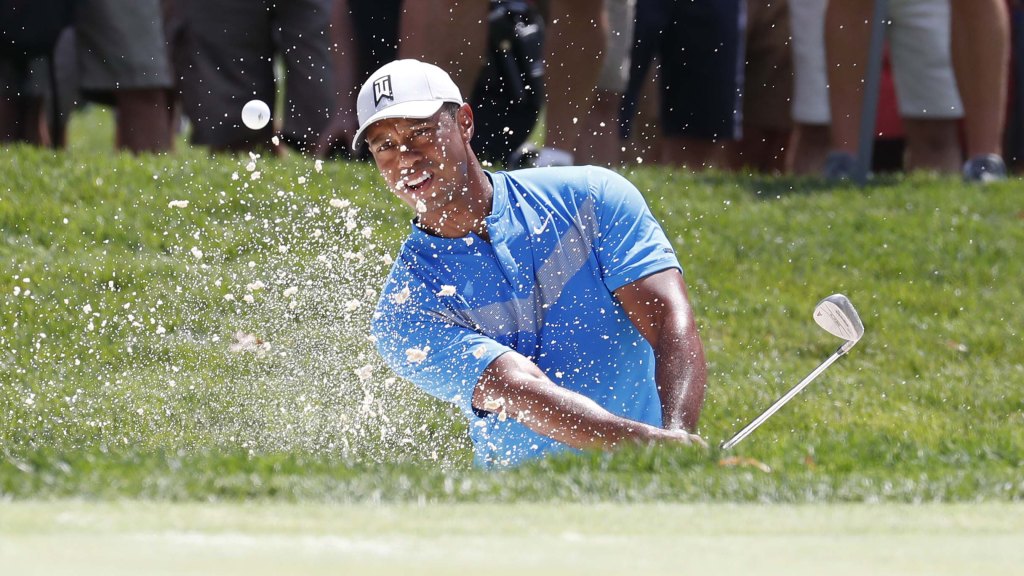 Tiger Woods had the two-way miss going with his tee ball Thursday.

Tiger Woods was the most-watched man in Chicago-land on Thursday.

Thousands of pairs of eyeballs were upon him at Medinah for the first round of the BMW and a day that started with promise, ended with Tiger putting himself in a tough spot if he wants to defend at East Lake next week.

Tiger’s day began with a fast start after he stuck his approach on the first hole to five-feet and made birdie.  He got the crowd lathered-up with a 40-foot birdie putt at the third — two under through three — yeah baby!

But it got tough after that.  It became a grind and Woods’ lack of playing time began to show over the final 15 holes.  By day’s end, he’d struggle his way to a one-under par 71 on a day when it seemed like everyone was going low at not-so-tough Medinah.

Tiger found himself tied for 50th in the field of 69 players and he needs to finish 11th or better to advance to the Tour Championship.

“I made quite a few mistakes around the greens and didn’t chip it, didn’t make that many putts, and consequently ended up at 1-under,” was how Woods summed it all up.

“It’s just not sharp,” he went on.  “I’m trying to make changes in my swing, and it’s just not quite there yet. And so it’s just one of those things. I need reps, and I just haven’t really put in a lot of reps.  Trying to change my plane a little bit, trying to get back to how I kind of had it at Augusta. It was working pretty good there.”

Good news out of that first day for Woods is that physically, he was fine.

“I didn’t feel any tightness in my oblique at all, so that was a positive, and I just need to clean up my rounds and get going. Seems like the whole field is under par. The golf course is soft. Even though it’s long, it’s just gettable,” Woods observed.

When he was warming up, Woods sensed a day made for scoring.  “You know, when I got out here, I thought probably five or six (under) would be leading, but once I got on the golf course and felt how soft the greens were, it’s like, hey, we’ve got to go. We’ve got to make birdies.”

Everyone else was.  Woods made the turn one-under then struggled coming home with just one birdie, off-set by a lone bogey.

“I made too many little mistakes around the greens. I had a three-putt and had a couple up-and-downs I should have made and missed a few putts I have been making, and I need to make them. As I said, the whole field seems like it’s under par, and we just didn’t do it today,” he lamented.

What did people expect?  He came to the playoffs with no work after the Open Championship and bowed out after that one round at Liberty National.  He spent most of his time after that getting treatment for the oblique strain.  No practice time.

Now he’s up against it and knows it.