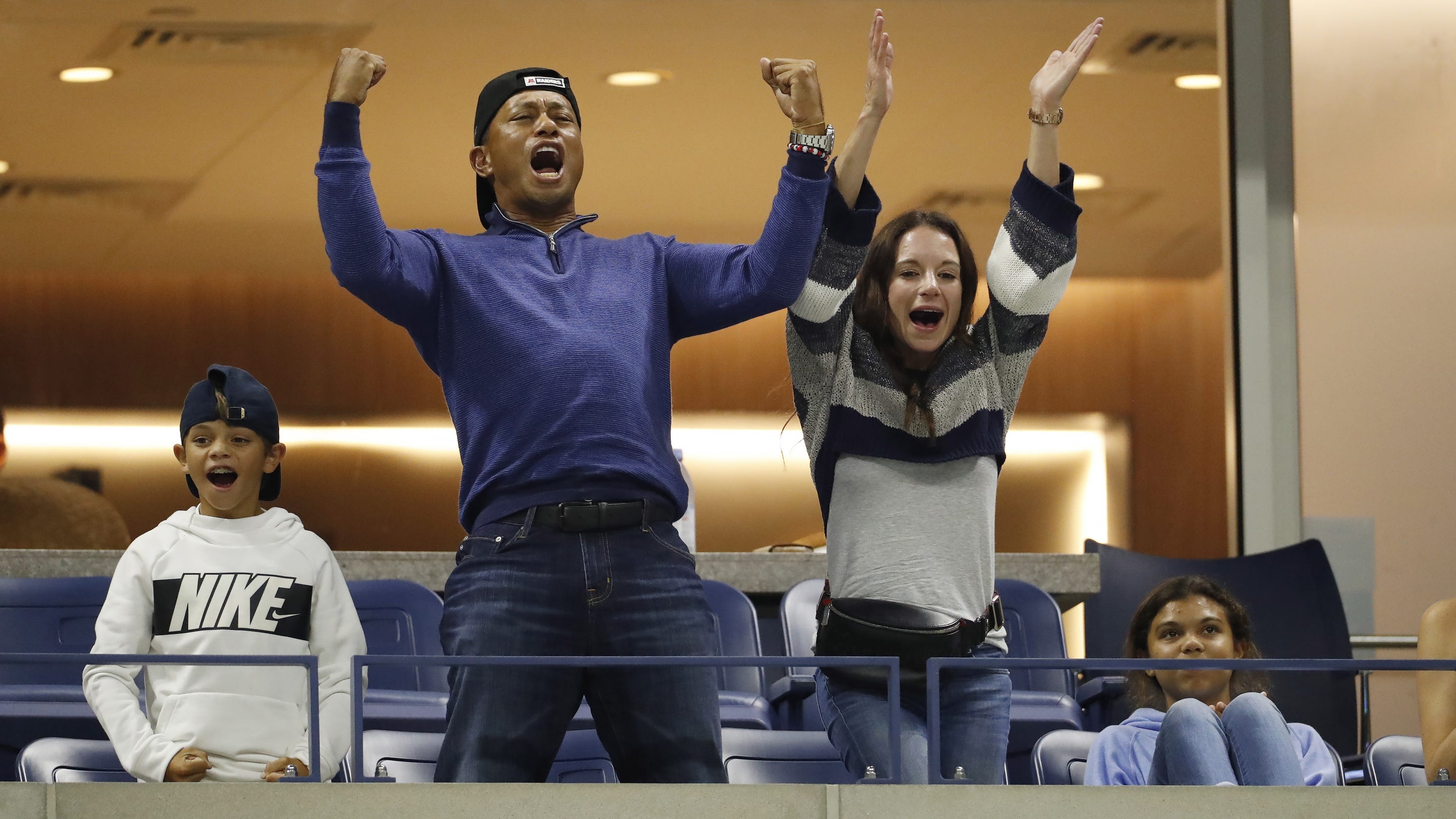 Tiger, son Charlie and gal-pal Erica get into the Nadal match while daughter Sam looks underwhelmed.

This Hurricane Dorian is a huge, very bothersome, serious storm.

The east coast of Florida was in the warning box and one very famous resident of Jupiter Island took the warning seriously.

Tiger Woods knows how to evacuate in style.

Tiger gathered up the children, Charlie and Sam, along with girlfriend Erica and loaded everyone on Air Tiger.  Destination New York and the U.S.  Open Tennis Championship to be exact.

So yes, that was El Tigre everyone saw Monday, with Charlie on his right, Erica and Sam to the left, taking in the Rafa Nadal vs. Marin Cilic afternoon matchup.

Of course Nadal is the biggest draw and Cilic had given him some troubles in the past.  Started out that way again until Nadal began to sieze control in the third and fourth sets.  The action got hot and furious and at one point when Nadal pulled off a spectacular  shot that saw him hit a ball around the net pole and back in Cilic’s court for a winner.  Woods jumped from his seat and gave one of those mighty Tiger fist pumps that we have seen so many times over the years.

Nadal went on to win and advanced to the quarter-finals while Tiger watched approvingly.  After the match, the two stars, both Nike guys, visited for some kind words and photo opps.

ESPN’s Tom Rinaldi reminded Rafa that he was performing in front of the great Tiger Woods and Nadal humbly extolled on the greatness that is El Tigre.

Nadal’s two off-court hobbies are fishing and golf and when asked if he’s gotten any tips from Tiger, Nadal quickly responded:  “It’s probably better that Tiger not see my golf swing.”

Woods broke up over that with a huge, non-stop laugh.

Fact is, Woods draws huge attention everywhere he goes and the U.S. Open was no exception.

Nadal appeared flattered that Woods came to see his match.

“It’s a huge honor playing in front of all of you of course, but to play in front of Tiger for me is a very special thing,” Nadal said in his post-match interview with Rinaldi while Woods watched.  “I always said I never had big idols, but if I had to say one, one idol is him. I always tried to follow him every single shot that he hit during the whole year.  For me, it’s a big pleasure to have him here supporting.”

It was a great evacuation trip for sure, especially when you have the kind of clout Woods can muster to get last-minute great seats at a U.S. Open and a Nadal match on top of that.

It also showed that Woods was out and about and that he’s on the road to a quick recovery from his recent (secret) knee surgery.

Tiger’s next appearance on the course won’t be until October 24 at the Zozo Championship outside Tokyo, Japan.

In the meantime, New York and the U.S. Open isn’t a bad place to hang out while waiting for Hurricane Dorian to make a move.