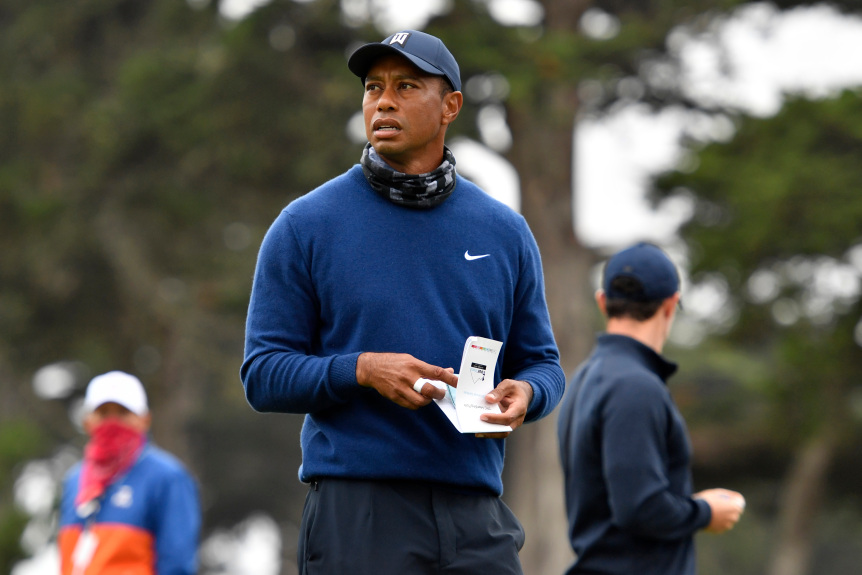 Tiger Woods shot 72 on Friday and is in at even par, eight back of the lead.

The backup Scotty Cameron wasn’t very friendly to Tiger Woods on Friday at the PGA Championship.

After a good putting round on Thursday that produced 68, Woods made absolutely nothing on Friday and ended up with a 72 that left him at even-par through 36 holes, eight back of the surprise halfway leader — Haotong Li.

Tiger was in the week’s early feature group with No. 1 Justin Thomas and No. 3 Rory McIlroy and the back nine at Harding Park became a survival test for all three as they struggled just to stick around for the weekend.

All three knew the number to play the final 36 was one-over par.

A pair of front nine bogeys left Tiger two-over at the turn and even for the tournament.  He finally made birdie at the 10th to get back into red numbers but gave that back with bogeys at 13 and 15 to put him on the cut line.  Tiger gave himself some breathing room when he finally made a 12-footer for birdie at the short par four 16th.  Two more pars and he was in at even par.  He’s gone 36-holes without a double.

Thomas wishes that were true for him.  Thomas made double-bogey at the difficult 13th and was on the wrong side of the cutline until he made birdie at the 16th.  He parred in to finish one-over and is in for the weekend.

Same for Rory.  McIlroy had it to three-under par through 11 holes and was looking like a contender until he three-putted from four-feet at the par four 12th and took a triple-bogey seven that sent him reeling back to even par.  He added birdie at the 16th to get back into red numbers and heads into the weekend seven off the lead.  He’ll need a record-setting weekend to pull this one out.

Once upon a time Hale Irwin whiffed on a six-inch tap-in putt.

Rickie Fowler didn’t whiff, but chucked his putter on his 15th hole Friday and missed a six-inch tap-in.

Fowler was on the six hole (his 15th) and had that shortie for bogey.  He didn’t pay attention, stubbed his putter and moved the ball about an inch.

Fowler composed himself and tapped in the next one, but the damage was done. He signed for a double-bogey six.  He took another bogey bogey on the eighth hole, turning what had been a decent round into a 1-under 69.

Rickie’s exit after two days snapped a streak of 14 consecutive cuts made at the majors, since the 2016 U.S. Open.

“In a way, it’s a reminder to not take anything for granted,” Fowler said afterward. “It wasn’t like I wasn’t paying attention. It sucks. I can explain it as golf. Unless you play a lot and you’ve been in that situation, you just kind of go blank and you’re going through the motions.”