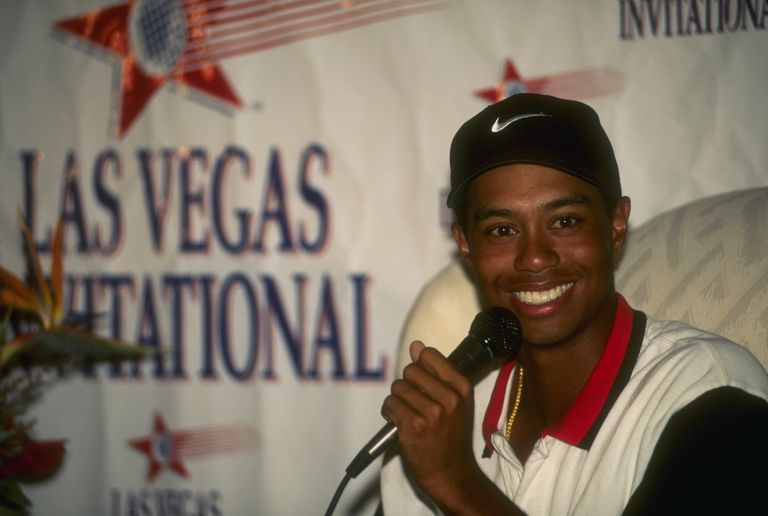 The first of 82 for Tiger came this week, 25 years ago in Las Vegas.

Has it really been 25 years?

Has it really been two-and-a-half decades since the world of golf changed forever?  Yes, it was that long ago when a slender, smiling 20-year-old Tiger Woods made the first of what would be 82 trips to the winner’s circle — the start of a career unlike any other — Tigermania was born in Las Vegas.

Tiger’s “Hello World” moment came back in August of ’96 at the Milwaukee Open when he made his professional debut, armed with a fat wallet thanks to a five-year $40 million Nike contract.  Today’s that’s chump change for Eldrick Tont Woods, whose net worth is pushing the billion dollar mark.  But Nike’s investment paid off handsomely when Tiger’s first victory came at the Las Vegas Invitational, the forerunner to this week’s Shriner’s Children’s Open.

This week back in 1996, that event was staged over 90 holes and three golf courses — the Desert Inn, the Las Vegas Hilton course and this week’s long-standing site — TPC Summerlin.

That was the week that polite golf applause became a thing of the past.  The raucous shouts of “Tiger-Tiger-Tiger” would become the often-heard chant on the PGA Tour.

Things really heated up on the back nine.  Woods jarred a 12-footer for birdie at the par three 14th to tie for the lead.  By the end of regulation play, Wood charged to a closing 64 and was tied at 27-under (333) with Davis Love III.

The playoff was short and sweet.  After Tiger hit his approach shot on the green, Love’s second with a short iron sailed long and found a bunker behind the green.  Love couldn’t get it up-and-down and Tiger had that precious first win — the first of 82.

The record shows that Tiger won $297,000 and the enlarged replica check still has a proud place on the wall of his home office with Woods’ palatial Jupiter Island fortress.  Mark Calcavecchia and Kelly Gibson finished a shot back at 333 and a guy named Phil Mickelson shot 336.

Tiger was polite and enthusiastic:  “It’s been an unbelievable experience,″ he said after winning.  ”It’s just like winning the (U.S.) Amateur, though.  I really can’t say what it means until I think about it more.″

Six months after Vegas, Woods rocked the golf world at the 1997 Masters.  He ran away from the rest of the field at Augusta National Golf Club and took home his first Green Jacket — four more would follow and he’d add 14 more majors — 15 in all for his storied career — second only to the 18 by Jack Nicklaus.

Woods spent the next 24 years becoming the greatest player of his generation and inserted himself into the debate as the the greatest-ever.

Tiger drove purses on the PGA Tour through the roof.  This week the winner will earn a million more than Tiger did 25 years ago.

Woods is spending most of his time in seclusion at his Fortress Of Solitude on ritzy Jupiter Island — no doubt working his hardest just to walk normally again.

His return to competitive golf isn’t even in the conversation this week.

He has a long way to go.  He should progress far enough to make an appearance at his Hero World Open in two months (Dec. 2-5) at Albany in the Bahamas.

If he’s super-human enough, we could possibly see him compete at the 2022 Masters — but that’s perhaps a dream for all the Tigermaniac’s  out there.

It’s been one helluva run for Eldrick T. Woods.

Yes, it’s been 25 years of ecstasy and agony for him.

It’s been a ride we most likely will never see again.