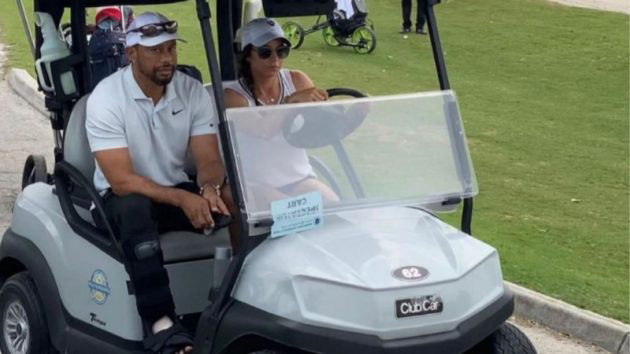 Last week we saw photos of Tiger Woods standing with his dog, Bugs, outside the under-reconstruction backyard practice facility at his palatial Jupiter Island mansion.

Last weekend some quick-on-the-draw parents shot another picture of Tiger as he ventured outside his compound to check out son Charlie in a tournament at PGA National in Palm Beach Gardens, a short drive from Tiger’s Palace on Jupiter Island.

Charlie was competing last weekend at the PGA National Junior Open, an event on the Hurricane Tour for juniors.  Charlie turned 12 on Feb. 8 and competed in the boys 11-13 age group.  He shot rounds of 84-83 and finished tied for eighth in his group.

There’s still a long way to go for Tiger with some tough rehab in front of him.

He’s got a year in front of him before it’s time for that annual trip down Magnolia Lane for The Masters.

Our early prediction?  Tiger will be working long and hard to return to golf at the 2022 Masters.

Who Are The Current “Impact Players” On The PGA Tour?

With the cat-out-of-the-bag on this $40 million pot that awaits the PGA Tour’s “Needle Movers” — perhaps it’s time to see who they might be.

There are a number of sites out there that are starting to rank these guys but Tiger Woods is still the Top Cat.  Rory McIlroy is behind him followed by Jordan Spieth, Rickie Fowler and Bubba Watson.

Other contenders include the aging Phil Mickelson (Fireside Chats With Phil), Ian Poulter and Justin Thomas.

Guys who should be up there include Brooks Koepka and Bryson DeChambeau but they better get to work.

You also get the impression that Dustin Johnson doesn’t give a flip about this and has probably turned that department over to his other half — Paulina Gretsky.  And Paulina knows how to draw on-line eyeballs.

The LPGA Tour is in Singapore this week for the HSBC Women’s World Championship and world’s No. 2, Inbee Park, will have a different caddie — her husband Gi Hyeob Nam.

“Singapore is definitely a special spot for me and I really love the country, and being here, I really love being here,” said Park. “It has been very tough call for a tournament to make the decision, but I’m really thankful that they made the decision for us so that we can come here and play. I’m really, really happy to be back here again in Singapore with really great memories here.”

Nam will make his return as Inbee’s caddie for the first time since the 2020 AIG Women’s Open, where she finished in solo fourth. “Well, I think myself might not be the biggest problem this week because my husband is on the bag this week. So I mean, in the heat conditions, I’m not sure how he’s going to do. Maybe if I don’t play after two rounds, maybe just my husband probably passed out,” Park joked. “Scotland was rainy but it was not hot. This week is going to be definitely a fight with the heat, and you know, we are going to have to rest really well this week.”

The world’s No. 1 — Jin Young Ko, will also be looking for a spot in the winner’s circle.

Ko is back in Singapore for the third time, looking to build upon her last two visits to Sentosa Golf Club.   She tied for sixth in 2018 and tied for third in 2019.  This is only her sixth event of the season.  She’s coming in off of three consecutive top-10 finishes and tied for third last week at the L.A. Open.