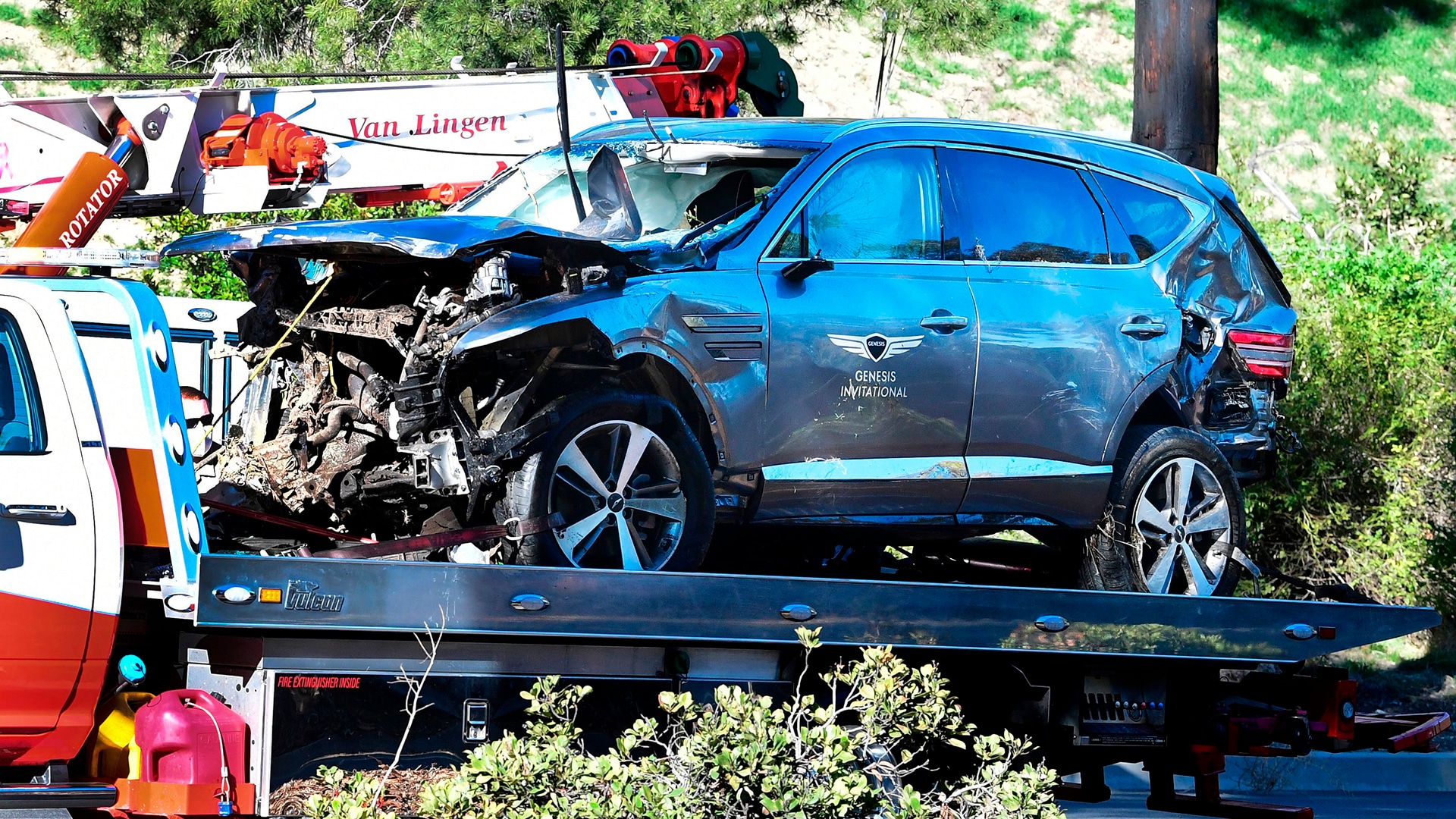 Tiger Woods was hospitalized and went into surgery early Tuesday morning after being involved in a single-car accident in Los Angeles.

Woods’ agent, Mark Steinberg, confirmed that Tiger suffered “multiple” leg injuries.  “He is currently in surgery and we thank you for your privacy and support,” was the message from Steinberg.

Woods was the only occupant in a car that crashed and rolled over. Los Angeles County firefighters rescued Woods from the wreckage using the jaws of life.  He was treated by paramedics and taken to Harbor-UCLA Medical Center in West Carson.

Woods was in Los Angeles this past weekend, awarding the trophy at the Genesis Invitational to winner Max Homa.  Woods stayed in town for a two-day content shoot for Golf Digest, where he is a playing editor and contributor.  The content shoot involved Woods giving on-course lessons to some celebrities, including Dwayne Wad and David Spade.

Woods, however did not arrive at the course Tuesday for the scheduled second day of activities.

The Los Angeles County Sheriff’s office released this statement early in the day, it was later amended:

On February 23, 2021 at approximately 7:12 LASD responded to a single vehicle roll-over traffic collision on the border of Rolling Hills Estates and Rancho Palos Verdes.  The vehicle was traveling northbound on Hawthorne Boulevard at Blackhorse Road when it crashed.  The vehicle sustained major damage.  The driver and sole occupant was identified as PGA golfer Eldrick “Tiger” Woods.  Mr. Woods was extricated from the wreck with the “jaws of life” by by Los Angeles County firefighters and paramedics, then transported by ambulance to a local hospital for his injuries.

The traffic investigation is being conducted by the LASD, Lomita Station.

Tiger Woods was conscious when fire-rescue arrived at the scene.  He was in a 2021 Genesis SUV, a courtesy car provided by the Genesis Invitational.

The “jaws of life” were not used to extricate Woods, the firefighters used a pry bar and axe to open the passenger door.

Sheriff Villanueva said there was no sign of driver impairment.

The traffic investigation will take a few weeks before findings are made available.

There was a second accident at the site caused by “rubber-neckers” or “Lookie-Lous” as the Sheriff called them.

The scene near Rolling Hills Estates is notorious for traffic accidents.

A neighbor living at the scene called 9-1-1.

Daniel Miller of the Los Angeles Times reported late Tuesday that Woods suffered a shattered ankle and two leg fractures, one of which was a compound fracture.

It was also reported that Woods was extricated from the vehicle through the front winshield after it was removed by fire-rescue.

ProFootballTalk.com reported that Tiger was on his way to meet Drew Brees (Saints quarterback) and Justin Herbert (Chargers quaterback), who were playing golf at the course where Woods was doing the shoot.

Phil Mickelson said earlier in the year that he would be “evaluating” his performance on the regular tour.  Thus far it hasn’t gone so well.

So how’s it going for Lefty?

Not so good.  Which has the Baron Of Betting heading back to where he’s the top dog — the Old Guys Tour — as in the over-50 set dubbed the PGA Champions Tour.

Mickelson is looking to make more history at the Cologuard Classic.  With a victory on Sunday, he would become the first and only player to win his first THREE starts on the senior circuit.

The odds are looking good for him.  The tournament is at Tucson National, which just happens to be the course where Phil won the 1991 Northern Telecom Championship when he was still at student at Arizona State.  No amateur has won a PGA Tour event since.

Mickelson has enjoyed the wider fairways, shorter courses and slower greens over on the Champions Tour.  This could be the first of a number of appearances on the Old Guys Tour for Mickelson.  Lefty has seen himself on a steady fall in the Official World Golf Rankings, he’s now 96th but that’s a lofty position for a guy on the over-50 set.  To put it in perspective, defending champion this week is Bernhard Langer, who has been a dominant force on that tour.  Bernie’s ranked 720th in the world.  Scott McCarron, another player who has been the top dog on that circuit, is ranked 1,825.

There normally aren’t a lot of eyes on the Champions Tour, but this week, Lefty should draw some eyeballs on television as he takes his shot at Over-50 history.

Puerto Rico Open:  Where You Hope You Don’t Defend:

Naturally the PGA Tour has to have a place where “AYO” — All You Others — can go play who aren’t in the lofty position to compete in WGC events like the one this week at the Concession Golf Club in Bradenton.

For them there’s the Puerto Rico Open where Viktor Hovland won in 2020 but has since risen in status and will be part of that WGC event.

No, this one’s for the up-and-comers and the older guys who are on the old gradual decline in skill-set.

The event will be played at the Grand Reserve Country Club with an expected full field.